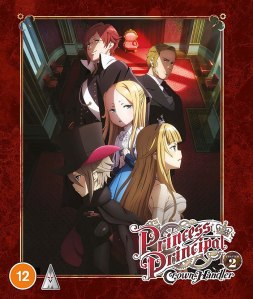 We return to alternate Victorian London which serves as the setting for the adventures of the group of female spies known as Team White Pigeon for the second of six theatrical releases under the Crown Handler heading.

Part two opens with a Commonwealth ship successfully testing a new Cavorite bomb which they plan to use against the Kingdom of Albion, but three have been stolen and smuggled across the border into Albion by a mysterious group. White Pigeon have been commissioned to locate the bombs and prevent a possible war being instigated by this third party.

Meanwhile, Prince Richard of the Albion makes his triumphant return to the Kingdom with a full street parade, during which an attempt is a made on his life. The assassin escapes but remains at large, and whilst suspected as being from the Commonwealth, there is no proof. This leaves White Pigeon with two problems to solve as the assassin has a habit of showing up whenever they get closer to discovering the whereabouts of the hidden bombs.

Still clocking in at under an hour, this second instalment of the Crown Handler saga does little to throw off how cheeky it is this story is being told over a film series, and cinema releases at that in Japan, meaning a long wait between chapters and huge expense for the fans. It is clearly too late to question the mentality behind this – I suppose Actas and Showgate know what they are doing and more importantly why they’re doing it.

It’s only been three months since part one was released here in the UK (Japan had a seven month wait between the two films) so we’re not doing too badly, although part three doesn’t hit Japanese cinemas until April 2023, which is 18 months since this film was on the big screen. Worst still, this chapter ends on a cliffhanger, making the wait unbearable for all of us; thankfully, we are suitably entertained in the interim.

However, this format of seemingly self-contained stories exposes the lack of depth each tale is afforded in the sharing of details. For instance, the search for the bombs leads the team of Ange le Carré, Dorothy, and Chise Toda to the Vegas Steam Theatre, whose current show boasts a giant fire-breathing dragon. It’s not a real dragon of course, but a Steampunk construction that still looks impressive in animated form and would probably wow audiences were it real.

Anyway, as you might expect, there are shenanigans involved among the members of the theatre group who we’ve never seen before, and are unlikely to see again, which means there is nether the time or the effort made to give them any depth or rationale for their behaviour. Along with the elusive assassin, they are the de facto antagonists of this tale and sadly flimsy ones at that, puppets to a higher power who may or may not be revealed any time soon.

Their real purpose is to act a temporary distraction from the bigger picture whilst serving as a backdrop for the girls to do their stuff. Only one character stands out, a hapless stagehand heavily in debt who is bribed by the criminals to do their bidding, and soon finds himself out of his depth. Part comic foil, part victim of circumstance, he is given a lot of time for someone quite incidental who we can assume we’ll never see again, which also applies to the corrupt gentlemen who use him.

Elsewhere, political intrigue continues to fester in the Albion royal household with the attempt on Richard’s life. The matter of their protection is naturally paramount and the government step in to take care of that. This takes Princess Charlotte and maid Beatrice out of the equation when it comes to spy missions as they are forced to remain at the palace, with Charlotte vowing to keep younger sister Mary safe.

Unlike the first film, which only dabbled in sowing the seeds for a bigger storyline, we are starting to see the first shoots of the direction it will to take here, tying in directly with the aforementioned cliffhanger. This is an encouraging sign that future instalments will have a stronger focus to them, but doesn’t mean the stories up until now couldn’t have been eked out or the films made longer to say 90 minutes, the potential is certainly there.

Certainly there is higher reward for fans of the action aspect of this series than in the first part, be it trying to diffuse the bombs or fighting with the enemy. The toughest opposition comes from the mystery assassin, a silent man hidden behind a hat but armed to the teeth with weaponry; his fighting prowess is remarkable, withstanding attacks from both Chise and Ange at the same time and fending them off with a different weapon for each girl. I have a feeling we may see more of him in the future.

Once again, Studio Actas deliver the goods on the visual front, with the artwork and animation being an eye-popping highlight. The heavy use of flames may have resulted in many taxing hours in creating a believable lighting effect from the glow of the fire but the finished article adds depth and texture to the imagery. The steam-driven dragon is a CGI creation, and as already opined looks great regardless.

By ending as it does with a huge twist to leave us hanging until the next chapter, there is a deeper sense of satisfaction that something is finally happening that wasn’t present in the first film; however, there is still a lingering feeling of this being a mere placeholder episode to give our heroines something to do before the story goes into overdrive, when the cast and the fans deserve much more.

Despite this, Crown Handler Part 2 is a welcome step in the right direction story wise even if the film series format has still yet to be justified.