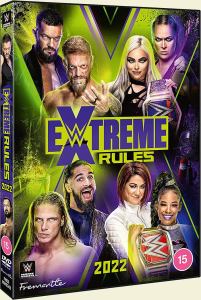 The Triple H era in WWE got off to flying start with the Clash At The Castle PLE, which didn’t have a bad match on the card and, aside from a questionable result in the main event, delivered on all fronts to produce one of the best shows of the year. This of course means the pressure is on for Triple H and his crew to maintain and sustain this forward momentum and good will engendered among the fans.

So it is the next PLE for Trips and co to build up to was the annual all-gimmick match outing known as Extreme Rules, which maybe requires a little more creativity to avoid making the stipulations seem too contrived for a logical progression or randomly added to eke a feud out longer than it needs to be. And there was a bit of both, as we’ll discuss, but as ever, it was about delivering a second consecutive strong show.

Except the big buzz heading into this show was the mystery of the cryptic viral messages which were appearing on WWE TV, live shows, and social media. QR codes, videos of a white rabbit interrupting segments (including this show), and an a cappella version of Jefferson Airplane’s classic White Rabbit played at house shows and TV tapings all referred to something, but what? Apparently, we would find out here.

Held on October 8th 2022, at the Wells Fargo Centre in Philadelphia, Pennsylvania before 14,500 fans. Commentary is provided by Michael Cole and Corey Graves.

Onto the matches and as always no results spoilers (the DVD cover does that) but plenty of opinion.

Following on from the show stealing singles match at Clash At The Castle, Sheamus and GUNTHER lead their respective groups into this Donnybrook, named after a public free-for-all fighting event that took place at Donnybrook Fair in Ireland from the 13th century to the 19th. Since Sheamus is the only Irishman in the match, one might consider the link to be tenuous, but Americans think all countries in the UK are one in the same.

As expected, this was a chaotic brawl with pub paraphernalia like beer barrels and a bar at ringside to sue as weapons. They were used in moderation, the rest of the time was devoted to straight up brawling with some wrestling moves thrown in which added some authenticity to the eight of their physical offence rather than relying on plunder to get pops. It made for a messy but energetic opener which gave all six men room to shine, although it is clear Pete “Butch” Dunne is in league of his own.

There is a running backstage gag with The Miz clashing with a football team mascot which resembles the Honey Monster, and naturally Miz suspects Dexter Lumis is the one inside the costume, the pay off comes later in the show for anyone who cares.

Due to the maladroit handling of her title reign by Vince McSenile, notably the terrible finish to the Summerslam match, Liv hasn’t been able to reach the height she should have as champ, and Rousey’s heel turn made her a babyface. Triple H’s idea of course correction was to have Liv challenge Ronda to a Extreme Rules match, and have her turn into a hardcore type fighter to prove herself as a threat.

Ronda had been “suspended” for attacking a ref, and then won a five way match to become number one contender upon her return. During the build up, Liv would attack Ronda with a baseball bat which would figure into this match. Rousey wore a pink Judo gi to the ring in tribute to the legendary Judo Gene LeBell who died before this show. A slightly sloppy weapon-infused brawl, there were a few blown spots with an anti-climactic ending.

One of Triple H’s more baffling rescue projects is Karrion Kross. During his NXT run, Kross became NXT champ but injured his shoulder during the title win, forcing him to vacate it immediately. Kross returned later to win the title again, during which time Vince brought him up to RAW, and had him lose to Jeff Hardy in 2 minutes in his debut. Now dressed as a masked gladiator and without his wife Scarlett, a huge part of his act, Kross died a death on RAW and laughed out of NXT by the fans, leading to his release.

The problem is that Kross isn’t that good in the ring and now he has grown his hair out, doesn’t look as threatening as he does when bald. Plus, Scarlett is the star of their act. But Trips sees something in him, thus brought him back with a big push going straight after Drew, and this match is two months in the making. Judging by the silence of the crowd, Kross just isn’t working and not even Drew’s popularity can generate any heat for this match.

Thankfully, the strap stipulation didn’t involve touching the corners to win, leaving this to draw its “drama” from both guys whipping the heck out of each other. Anyway, five stars for Scarlett’s outfit.

The feud continues with Bayley getting her title shot as a result of pinning Bianca in their trios match at Clash At The Castle, and a stip was needed so it fit in with the theme of this PLE. The key here is that Belair’s usual running mates, Asuka and Alexa Bliss have been taken out by Damage CTRL leaving Bianca to fend for herself, but she is the champ so she’ll no doubt look strong here.

Ladder matches are becoming increasingly hard to be inventive with without relying on spots which are so dangerous and reckless that someone will actually die. Women’s ladder matches tend be a little safer, relying more on the creative side for the thrills but the challenge is, how do you do this without being too goofy? Well, this match had a bit of both, with some gnarly, uncomfortable bumps being taken by both women and story driven spots, which gave it plenty of heat. A very good effort though not a classic.

Speaking of feuds still going, this one is entering its 12th year, or at least feels like it, although to be fair it has varied between participants to give its longevity. At this point, it is Edge’s turn to have the spotlight after Clash At The Castle when Dominik Mysterio turned on Edge and his father to join The Judgment Day. Rey refuses to fight his son but Edge is less fussy, but first he has to get through JD leader Finn Bálor.

I Quit matches tend to be long by virtue of the need to wear your opponent down to make them say the magic words, and this one is no exception, lasting a few seconds shy of 30 minutes. Unfortunately, only the last ten minutes are enjoyable, the previous 20 minutes are plodding and tedious. The crowd picked up a little when the match spilled into the arena but the heat was low for the most part until the big cameo heavy ending. It was overkill but the backstory demanded it and worked in this context.

For the uninitiated, the fight pit is an NXT creation largely for Matt Riddle to have MMA style matches to settle his feuds. The set up is a steel cage surrounding the ring sans ropes with a caged platform on top to create a sense of depth, like the underground fight pits you see in the films. Similar to MMA, the only way to win is via submission, KO, technical KO if they can’t answer a count of 10, or ref stoppage if it’s too bad.

Serving as special referee is a UFC fighter named Daniel Cormier presumably to give the match some legitimacy as a shoot fight, although he actually doesn’t play any significant part in anything outside of this. Riddle’s experience in the Octagon was to his advantage whilst it is clear Seth initially seemed a little lost from not having ropes to bounce off, and some of the platform spots were a little contrived but that’s wrestling for you.

A good match but the NXT ones worked better from being in a smaller venue which gave it a real underground feel, whilst here it was a visual spectacle on the level of Hell in a Cell. If they repeat this match on a WWE PLE again, it would have to be with those who have prior MMA experience, like Lashley, Lesnar, Rousey, Baszler, etc.

Once this was over, the lights went out and He’s Got The Whole World In His Hands played signalling the return to WWE of… Eva Marie!

Just kidding – it was Bray Wyatt (Eva Marie coming back would have been truly horrific) but then everybody had already figured that out on day one, but fair play to WWE for keeping the campaign up for the duration despite it being a foregone conclusion. He got a big entrance, complete with the Firefly Funhouse cast appearing around the arena and a big response from the crowd but it ended up being a whole load of nothing to tease fans to tune into TV to see what happens next.

Well, this was a mixed bag of a show and not necessarily in a positive way. It may seem hasty and premature to suggest Clash At The Castle was a one off but on the evidence of this show, and some of the subsequent TV episodes which have been marred by old problems, only the benefit of the doubt is holding this accusation at bay.

To play Devil’s Advocate, the Castle show was perhaps too good to kick off the new era from setting the bar way too high, but the new regime also had to set out their stall with a successful show or compromise the goodwill accrued in the wake of Vince’s departure. In other words, this follow-up felt like a small step backwards with more Vince-esque booking than the more logical ideas of Triple H, although it is vital to know that booking for NXT is always short term as main roster programmes run longer.

Not a bad show but the ghosts of the past were very much still looming over it, and the adjustments made by Triple H to appeal to the WWE audience and not his hardcore NXT audience are still a work in progress. Everyone worked hard as usual, and if it wasn’t the booking holding them back, it was probably the gimmicks for each match, which invites some overlap between the bouts where plunder is involved.

As the parade of returning former faces increases, it will be interesting to see who gets to makes progress up the ladder and break the glass ceiling or if this is a return to the status quo we‘ve been stuck in for the past decade. Will it be worth bring them all back? Yes Bray Wyatt, I’m referring to you…