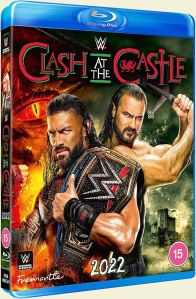 The first PLE of the Triple H era in WWE sees a return to UK shores for a major canon event for the first time since Summerslam 92 at Wembley Stadium. Thirty years is a long time, in part due to the hurdle of the time difference in the US, which WWE are concerned will cost them audiences if they have to watch the show earlier in the day – yet have no qualms with international fans getting up at silly o’clock to watch evening held shows from the US.

But I digress. The ghost of Vince McMahon is slowly fading into the background as the new regime have not only added new names to the main roster, but also brought back a few familiar faces, course-corrected a few trajectories, and freshened up the title scenes Not everything has changed dramatically as Triple H is aware the main WWE audience have different expectations of the product from the NXT faithful, but the improvements are exponentially a work in progress.

The big news is Drew McIntyre’s homecoming – sort of, since Wales and Scotland are two different countries but the Yanks don’t seem to understand this, thinking all UK countries are interchangeable as native homelands. Anyway, Drew has the chance to dethrone Roman Reigns after two years as Undisputed Not For Discussion Universal World Cosmos Galaxy WWE champion in front of a packed stadium of partisan fans. It has to happen, right?

Held on September 3rd 2022, at the Principality Stadium in Cardiff, Wales before 62,296 fans. Commentary is provided by Byron Saxton, Corey Graves, and Michael Cole.

Onto the matches and as always no results spoilers but plenty of opinion.

Damage CTRL is the name of the unit comprising of Bayley, Dakota Kai, and IYO SKY who debuted at Summerslam a few weeks earlier and have already made their mark on WWE TV, on both shows. In fact, SKY and Kai are a dominant force in the Women’s tag team division. Asuka and Alexa Bliss came to Bianca’s aid on RAW in the absence of an injured Becky Lynch starting this trios feud.

Great opener as expected and all action that even Alexa looked good! In an act of typical British insubordination, the crowd started signing “Hey Bayley” (a riff on Bruce Chanel’s 1962 hit Hey Baby) like they did when she was a babyface in NXT, which Bayley, (the heel) had to no sell, teasing the fans by tagging out as soon as she tagged in. So much was happening here it ended up a real blast whilst the result might seem questionable, storyline wise it was the right call.

Bret Hart was shown at ringside to celebrate 30 years since the classic IC Tile match at Summerslam 92 against Davey Boy Smith, the British Bulldog.

Disclosure – I’ve never liked Sheamus and by all accounts, he is not a nice person in real life with a history of bullying smaller talents backstage. Plus, he is a friend of Triple H’s so he still has a job. However, in this context, despite the pan-European dynamic, he is the face here, though I was rooting for GUNTHER – TAFKA WALTER. A bit slimmer and tamed a little bit, WALTER was a notorious monster on the European circuit known for his brutal chops and destructive offence.

I urge you to check out his NXT UK matches against Pete Dunne, Tyler Bate, and Ivan Draganov for evidence of how awesome WALTER was – not that GUNTHER isn’t a beast in his own right. Prior to the match, GUNTHER’s former stable of Imperium reunited with Giovanni Vinci (nee Fabian Achner) joining Ludwig Kaiser in accompanying GUNTHER to the ring to offset the Brawling Brutes of Ridge Holland and Butch (Dunne).

Anyway, I enjoyed seeing GUNTHER chop seven shades out of Sheamus, kicking his head off, and slapping him around like the pasty faced ginger git he is, although credit to the Irishman for holding his own and taking his punishment like a man (not like he had any option). If you like big hoss fights and non-stop, eye-watering violence (or you hate Sheamus as much as I do), then this is for you.

Poor Liv. She was doing well getting over with the fans and was rewarded by winning the women’s MITB match and subsequently the SD women’s title by cashing in on Ronda Rousey at the same show. Rousey got her rematch at Summerslam, but it was a letdown, not just from being five minutes long, but also through the crummy finish which was meant to be Ronda’s heel turn but saw the fans boo Liv instead.

By way of rehabilitating Liv, she faces Ronda’s former training partner Shayna Baszler in this title match and, shock horror, they had a good match. THIS is how they should have booked the Summerslam match with Rousey, telling the story of little Liv having to survive Shayna’s MMA offence and submission holds, somehow finding a way to counter Baszler’s grappling prowess. Great showing by both ladies here.

One hangover from the Vince days is the never-ending feuds and this one seems to have been going as long as The Mousetrap, although the key players have been moved about from one side to the other. For those who may have lost track, Finn Bálor turned heel and now leads The JD with Damien Priest and Rhea Ripley, whilst erstwhile leader Edge is now their babyface enemy.

The match was okay, the usual formula tag match that was more about the above-mentioned storyline which played out afterwards, to great effect despite the logic being a little askew. But it worked, so it’s all good.

Originally due to take place Summerslam, this heavily built showdown was postponed via a storyline injury to Riddle and saved to give this show an extra attraction match. With more time to pour fuel on the fire, the promos between these two on RAW got personal and shooty, with both bringing up their respective marriages (one is intact, one isn’t) to score shots.

Despite this, Riddle still came out all smiley on his scooter whilst Seth seemed to have robbed Elton John’s 70s wardrobe for his goofy devil outfit, which was somehow meant  to be a tribute to Bret Hart. Don’t ask me how… Thankfully, once the bell rang, the silliness went out of the window and the chaps got serious and had a hard-hitting match, the story being Riddle couldn’t control his emotions. Had he arrived in a more serious mode this would have got across better, but this was again good stuff.

This has been the big title match for a while now and could have happened sooner, but it was felt holding out for this UK show would make for a bigger and better spectacle. It meant has been in a flux of late, stuck in feuds with Baron Corbin and Sheamus, with the retuning Karrion Kross (no, I don’t get it either) waiting in the wings as his next one. By all rights, this is the time to pull the trigger, freshen things up by having a champion who will be on TV each week, as well as sending the fans home happy.

However, the rumoured match for Roman at Wrestlemania 39 next year is against The Rock, which doesn’t need to be for the title but you know even Triple H would want to create the biggest buzz possible for their biggest show of the year. At least it isn’t Reigns vs. Lesnar again! I suppose I’ve pretty much given away the result of this match but I can say it was very touch and go for the most part, the drama building and building as it went on.

As a diversion from this, Austin Theory made an appearance threatening to cash in his MITB briefcase, but boxer Tyson Fury put paid to that for a fun spot and easy pop. Fury however, was ineffective when it comes to the Bloodline who gained a new member on this night. Then in one of the strangest closings to a PLE, Fury got in the ring afterwards, strangely shaking Reigns’ hand, then led the crowd in a singsong with Drew, although both claimed they thought the cameras were off.

The end of the main event notwithstanding, this was a huge positive step forward for WWE under the new regime on every front. Limiting the card to six matches, giving them all a decent amount of time, and showcasing new talent might sound like a simple and obvious change but you can’t argue with the results. Clearly, the bonus of having a huge and rabid UK crowd paid dividends to the atmosphere and the reception to the matches, but this is just part of the story.

Everything here really served a purpose, and for the first time in a heck of a long time we had a card full of good to great matches and not a stinker or filler in sight. No dead weight names just to give them a spot on the show, just the matches that matter for the moment. This enabled those who have never been deemed worthy of attention to show what they can do whilst the general absence of rematches and repetition was more than welcomed.

One other aspect which may have gone unnoticed is the commentary. For years, Michael Cole has been lambasted for being a terrible announcer, but that wasn’t always his fault. Over the past decade plus, he has had Vince McSenile yelling in his headset at every step of the way telling him to say all the stupid things Cole took the flak for; now the old geezer is gone, Cole can fly solo so to speak and the change is remarkable.

Not everything is perfect in WWE right now but this show didn’t just demonstrate what happens when you focus on what works for the fans and not your own outdated tastes, but also when you utilises you talent to the best of their abilities. As a launching point for a new start without needing to reboot from scratch, this is how you do it!

So, where do we go from here?

Complete Clash At The Castle Kick-off show including:

2 thoughts on “Wrestling Review – WWE – Clash At The Castle”