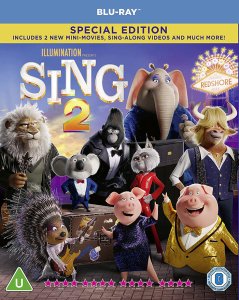 It’s apparent critics don’t always get it right, and their snobbery towards some films will backfire. 2016’s Sing was mauled by the press but proved a success regardless of their derisive, sneery opinions. It might have taken five years for this inevitable sequel to arrive, also pilloried by some joyless scribes who were clearly ignored, as Sing 2 became the highest grossing animated film of 2021.

Crystal’s scout Suki Lane (Chelsea Peretti) tells Buster his show isn’t good enough for Reshore. Undeterred Buster takes the group and punk rocker Ash (Scarlett Johansson) to audition directly for Crystal in Reshore City. Crystal quickly rejects them, demanding something new. Gunther blurts out an idea for a sci-fi musical using the songs of reclusive rock star Clay Calloway (Bono). Crystal gives Buster the green light if Calloway is in the show – except nobody has seen him in 15 years.

Quite why Sing got so much hatred I’ll never know – it was harmless, earnest, family fun with a toe-tapping soundtrack to suit all tastes with great characters. Sing 2 retains the spirit of the first film but this time has a stronger story now the cast are successful but still need to prove themselves as unit in the face of adversity. I don’t doubt the plot was a sly dig at those who slated the first film but it doesn’t hang its hat on this either.

Like before, this is a jukebox musical of sorts with familiar tunes for all ages with the added heft of a few U2 numbers – including a bespoke new song by the band played over the end credits – although this isn’t all about them. Many of these ditties appear as part of the soundtrack or are diegetic when necessary, mixing current names like Billie Ellish with recent-ish acts like System Of A Down.

With the cast being anthropomorphic animals, the new additions follow suit with Crystal being a white wolf, a megalomaniac mogul who rules through terror, whilst Calloway is an aging lion, his long mane white, and his outlook insular and gruff. Calloway was the top rock star of this world until his wife and muse Ruby died, sending Calloway into retreat in his remote country mansion, and away from the public eye.

Therefore, it was a case of reckless hubris by Buster to allude to having the rights to use Calloway’s songs in Gunther’s space opera show and to allow Crystal to infer Calloway would be in the show. But Buster is desperate to prove himself to the snarling mogul, refusing to accept he is not good enough when his own self-belief and local success says otherwise. Fortunately, Buster has a loyal troupe to support him and give their all to help him achieve his goals.

From here, the story is split into two parts – the struggles of putting the show together and the attempts to locate Calloway and coax him out of his self-imposed retirement. Both provide plenty of humour in spite of the conventional storytelling. For example, Crystal demands that his spoiled daughter Porsha (Halsey) is given a role. Due to Rosita being scared of heights, and because she can sing, Porsha gets the lead – except she can’t act, and her entitled attitude isn’t making her any friends.

Meanwhile, Buster sends Miss Crawley (Garth Jennings) his elderly iguana assistant to find Calloway, but ends up being shot at by the secretive star. She loses her glass eye, inadvertently replacing it with an apple, so Buster and Ash attempt to make peace with Calloway instead. This leaves Miss Crawley in charge of the production, which she runs with military precision as she continues to steal the show for this writer.

Elsewhere, shy Meena is paired with an arrogant gnu named Darius (Eric André) to play her love interest but he is too much in love with himself to notice Meena’s nervousness. Fortunately, she meets another elephant, ice cream vendor Alfonso (Pharrell Williams) who becomes Meena’s unwitting muse. Another new face is tyrannical proboscis monkey choreographer Klaus Kickenklober (Adam Buxton) brought in to teach Johnny to dance, usurped by street dancer Nooshy (Letitia Wright) who says she can teach him better.

By virtue of the target audience for this film being children, naturally, the story is going to be uncomplicated, yet there is an underlying maturity present, in part to Crystal’s corporate bullying, and Calloway’s melancholy. Here is a lion who had it all, and without his beloved wife, now feels life has no meaning. That is quite heavy for kids to get their heads around but the script addresses it without being too morose, nor does it sugar coat the gravity of Calloway’s feelings.

Ultimately, the rollercoaster ride is a simple one of Buster and crew fighting from behind at every turn and ending up triumphant, presented in a loud, colourful, energetic, and vibrant fashion. Illumination is a studio who by now should be mentioned in the same breath as Pixar, Disney, and DreamWorks. The animation and artwork is once again top notch, highlighted by the finale of the stage show performance, a visual treat indeed.

Regardless of the negative vibe merchants lacking a soul and sense of humour who persists in demonising this franchise, Sing 2 is pure, unadulterated, feel-good family entertainment with a strong moral foundation that works on any level you like. Even if you don’t like the musical choices, the infectious energy, likeable characters, and smart humour ensure a good time is had by all. Curmudgeons need not apply.