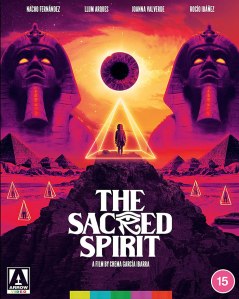 We all need to believe in something, otherwise, there would be no point to life. It helps, in my opinion at least, if that thing we put our faith in is tangible thing like music, love, or humanity. As an atheist, I’m not here to knock the pious for their beliefs, but I do have to ask where is the difference in believing in God and believing in UFOs?

In the Spanish town of Elche, a young mother Charo (Joanna Valverde) is at her wits end since the disappearance of her daughter Vanessa, twin to Verónica (Llum Arqués). With police investigation on going, Verónica is often left in the hands of her uncle José Manuel (Nacho Fernández), a member of a local ufology group Ovni-Levante. His belief in this is so strong, he is certain Vanessa has been taken by aliens.

Meanwhile, Ovni-Levante’s leader Julio (José Ángel Asensio) passes away, the consensus being he isn’t dead, rather his spirit has been transferred into another body somewhere among in the stars. This puts José Manuel in charge of the group, shortly after which he is harassed by a group devoted to Egyptology. Are they doing this because they know something or disagree with his beliefs?

Chema García Ibarra’s feature debut is a hard film to categorise. It opens like a dark satirical comedy, before morphing into a quotidian exploration of Ibarra’s hometown of Elche, then gets uncomfortable – really uncomfortable. I wonder if this was the intent from the beginning but it is not as if it comes from nowhere; well, it sort of does but the clues are also there if you look hard enough.

Except they’re not really there in the traditional sense – they start to appear as innuendo by reading between the lines then fester in the audience’s mind, and Ibarra continues to let us wonder if what we are thinking is correct until he is ready to drop the bomb. But this is all to come in the final act, before that The Sacred Spirit, for this writer, comes across as the result of crosspollination between Roy Andersson and Aki Kaurismäki, although I imagine others will feel differently.

How to explain the plot isn’t easy either, as nothing plays out in an accessible way for those used to a straightforward narrative. Events take place in a linear timeline but the abstruse nature of the tone and palpable disconnect between Vanessa’s disappearance and José Manuel’s alien obsession, makes it all feel disjointed and rambling. The uneasy rhythms don’t really settle as they should, but this is where Ibarra reveals his skill as a filmmaker in holding the audience’s attention.

Opening with a scene which might have come from the mind of Chris Morris circa Jam, we meet Verónica delivering a reading on the theme of “baptism” containing words and opinions a girl of her age wouldn’t even know. This would denote to the audience that we are entering into a world where convention is not going to be observed and subjectivity is of the essence regarding taste and boundaries.

The tenets of Ovni-Levante are not mocked – this is very important to note – despite the group being presented as bunch of geeky misfits keeping to themselves like a secret cult. That said, they are not as ominous as the rival mob hanging around outside José Manuel’s bar with their Eye of Horus leaflets acting a symbol of evil. Interestingly, José Manuel’s shares this interest – his bar has many items of Egyptology on display and they serve as a leitmotif with symbolic relevance to the climax.

Regarding the town of Elche, Ibarra gives us the impression everyone in this community has their own esoteric take on life and set of beliefs, leaving little room for any stone throwing. For example, Charo and José Manuel’s mother Carmina (Rocío Ibáñez) is said to be psychic thus her pronouncements are gospel, but Alzheimer’s has robbed her of this ability when her daughter needs it the most.

But whilst Charo is going out her mind with worry looking for Vanessa, her neighbours gossip about the possibility of East European organ traffickers being involved, which is more plausible than aliens kidnapping her, but idle gossip is still idle gossip. On TV, adverts run for get rich schemes and health potions of “ancestral” origins, implying the target audience is the traditionalist with a bent for the mystic.

Avoiding discussing the plot in depth is necessary in my view, otherwise the ending won’t hit as hard as it does if one has even the bare facts in their possession. Ibarra’s main weapon is the power of expectation – every scene has us wondering where it is going to take us, as nothing is obvious. This is at its most devastating in a scene which acts as a prelude to the denouement – nothing of interest happens on screen but our minds are racing as to what is occurring behind closed doors.

Not very often does this happen but I have to hand it to Ibarra for making me feel so on edge and fearful for what I can’t see in a film, and it still doesn’t prepare us for the big reveal at the end. I can’t say I got everything Ibarra was saying with his film – which I assume is don’t believe everything you hear but look at what is happening in front of you – and the so-called dark humour was way to dry for my tastes, but he had me enrapt for 97 minutes, so he is doing something right.

Using a non-professional cast, which gives this a natural, earthy, feel, Ibarra suffuses The Sacred Spirit with an aura of validity surrounding the concept of belief, and how easy it is to make anybody blind to the truth if you disguise it in spectacular fashion. It might be too absurdist to be cynical but it ends on one hell of a bruising blow.