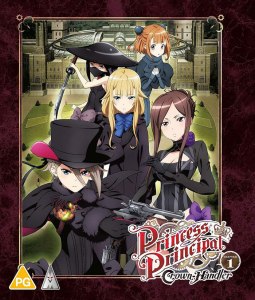 As is the current trend, the further adventures of Team White Pigeon, a group of young female spies in an alternative Steampunk version of bifurcated Victorian London, comes in theatrical form rather than a second TV series. This however, comes with a caveat for anyone who hasn’t seen the original Princess Principal TV series, as this six-part film series is a direct continuation from the TV outing.

Whilst you can read my review of the series for a refresher, for the sake of expedience, a reminder that Team White Pigeon are Princess Charlotte of the Albion Royal Family; her maid Beatrice; Ange le Carré, Charlotte’s Commonwealth look-alike; Dorothy, also from the Commonwealth; and Japanese assassin Chise Toda. Together they work to reunite the country via espionage, tackling destructive forces from both sides.

The film opens with a bookseller in the Kingdom of Albion being arrested for selling works which criticise the Crown, following the failed assassination attempt on the Queen (who is not Victoria but sure as hell looks like her). Ange, Chise, and Dorothy are tasked with freeing the bookseller from jail. This doesn’t have much direct impact on the main plot but like a Bond movie, it is an action packed prologue designed to kick things off with a bang.

Shortly afterwards, the Duke of Normandy instigates a crackdown on Commonwealth spies, which reveals the presence of a double agent within the Royal Family. Initially, it seems like a common issue of keeping this person from the Kingdom, until the person the group suspect knows both Ange and Charlotte’s secret, meaning he would be a threat to the Commonwealth too.

First, they need to be sure that the man in question is the spy. This requires Ange once again to impersonate Charlotte whilst she snoops around the royal chambers for clues as to his double-crossing actions. It is revealed early on that the mole is a man who cared for Ange when she was a child therefore knew about the switch with Charlotte; furthermore, he has achieved high status within the household, and has free and direct access to the Queen, making him doubly dangerous.

Yet, in his old age he is hardly a weapon-wielding double agent with hatred in his heart, he is now someone who has lived this duplicitous life for over 25 years and has had enough, hoping to retire peacefully. Of course, someone who possesses such vital and sensitive information as he does can’t just take a golden handshake and go live in the country until his time comes, and he knows it. Which is where White Pigeon come into play.

Calling Crown Handler Part 1 a film is a little spurious since it doesn’t even hit the hour mark, equating to two and a half TV episodes if you prefer. This is one aspect of this trend for moving a series to the big screen – the run time won’t feel like value for money for a start, getting less than 60-minutes viewing, whilst the integrity of the franchise is cheapened slightly by not giving the stories sufficient room to breathe. And there are six films planned in this series!

On the plus side, the time is used well, and the story is told with minimum distractions; if one thing made Princess Principal so good, it was its scripting. That said, this particular instalment does end just as it is starting to pick up steam, thus we are left wanting more. For instance, we have little background about the double agent, whose story is begging to be told but isn’t. In his current aged state, we are expected to have some sympathy for him, but should we given his life of deception and lies?

How did he come to be put in this position? Where does his true loyalty lie? Does he have regrets? Are his feelings towards Ange, Charlotte, and others genuine or part of the façade? Another thirty minutes would have covered this unanswered questions, and made the man a more complete character to understand, though I suspect some of you may enjoy the mystery and deem the chap as enigmatic for this reason. Fair play to you if you do.

I will concede this is a major niggle but not an insurmountable one in enjoying the story, but what I fear will disappointment some fans is the paucity of action sequences. Aside from the exciting opening sequence, the energy level doesn’t rise again until the closing stages during a daring escape, and even then, this is brief. It may just be because the nature of the story calls for a more cerebral approach to exposing what is ostensibly a non-violent mole, hence the measured pace and practical-based operations.

Returning fans will be pleased to know the visuals are as appealing as ever, possibly better with the additional budget. Studio Actas have again created an immersive world rich in the aesthetic of the Victorian period with a touch of Steampunk – represented by an unusual tower with what looks like a futuristic jet fighter sticking out of it. By dint of this, the animation looks more traditional and cell drawn in execution with few signs of obvious CGI, otherwise this is a classy presentation.

Making the start of a six-film series, the ending of this one is typically ambiguous – it either implies the direction the story will take in future instalments, or this is a one and done adventure, and the next chapter will start afresh with a new story. The second film has been released in Japan already whilst the third is still in production, so we Brits are not the only ones in for a long wait for this series to continue.

Princess Principal: Crown Handler is not the best jumping on point for newcomers but could lead them to seeking out the series to see more of it. For the rest of us, it is great to see White Pigeon back in action.