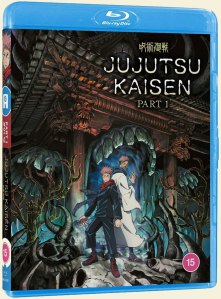 If anime is to be believed, Japan must be the most unfortunate country in the world for rampaging spirits and demon manifestations; you can’t move for stories about teenagers with latent abilities to see ghoulish aberrations or have the potential to be trained to combat them. And to prove my point, here is another one.

Yuji Itadori is a high school boy with unnatural speed and strength but no real direction in life. His grandfather on his deathbed tries to encourage Yuji to use his abilities to help others but Yuji isn’t sure how. Meanwhile, Yuji gave his friends in the school occult club an object he found for them to identify, which is also of interest to Megumi Fushiguro, a student from another school capable of recognising cursed objects that unleash evil.

Megumi senses the cursed aura on Yuji, despite not having the item which his friends have opened, revealing a finger from a powerful demon named Ryomen Sukuna. A demonic spirit appears and attacks the group and Yuji and Megumi rush to save them. Yuji eats the finger to quash its powers but instead is possessed by Sukuna but Yuji is able to suppress him although he is now cursed himself and must be exorcised.

There is an air of familiarity about Jujutsu Kaisen that might just be off-putting for the more discerning or fussy anime fan who have seen it all before and, admittedly, often done better. However, shonen fantasy adventures are a relentless subdivision of anime that cater for fans looking for something loud, brash, action packed, amusing, and above all, entertaining meaning shows like this will always prosper.

Created by Gege Akutami, Jujutsu Kaisen is either hopelessly derivative or simply wears its influences on its sleeve, but has enough room to add its own stamp on certain tropes, conventions, and clichés to engage audiences and earn their loyalty on its own merits. Depending on your mileage, this may take a while as you spend the first few episodes deciding which antecedents have been plundered, or its energy and enthusiasm wins you over straight away.

Now possessed by Sukuna, Megumi calls on his teacher Satoru Gojo, a Jujutsu sorcerer, to perform the exorcism except Yuji’s ability to suppress Sukuna prevents this. Instead, Satoru recommends Yuji enrol at the secret jujutsu training school to learn to control his powers and use them for good. But there is a catch – Sukuna had four arms meaning he had twenty fingers and six of them are in the sorcerer’s possession. To control Sukuna, Yuji has to eat the six fingers and the remaining fourteen when found, and then they will both be killed.

Of course, Yuji is a thoroughbred shonen protagonist and recalling his grandfather’s last words, agrees to these terms if it means helping others. Essentially, Yuji is now on a suicide mission which implies a rather morbid climax to this tale waits, when it happens – the manga started in 2018 and is still running, so our hero hasn’t met his fate yet. However, the script doesn’t seem to have considered this as yet, so Yuji remains upbeat and eager, rather than someone aware he has a finite amount of time left in this world.

Presumably, this is all to come later as for now, Yuji is under training, first from Satoru and later from his sorcerer colleague, the urbane Nanami Kenton, to seek the remaining fingers. His fighting training lasts two episodes, in which he joins Megumi and token female Nobara Kugisaki in minor exercises, but is curtailed when Sukuna takes over Yuji’s body and rips his heart out to stop him switching back.

Don’t worry, Yuji’s not dead already but the conniving Sukuna invites Yuji into his soul and makes a pact with him, one of the conditions of which is Yuji will forget about it, that will surely lead to disaster for Yuji when Sukuna exercises it. As for the others, they are entered into an interschool competition and when we last saw them, they were training with a team which includes a giant anthropomorphic panda named…Panda!

Something that is different about this show is how the main villain Sukuna is technically omnipotent without being a persistent or recurrent threat. Sukuna is more of a dormant concern to let others take the spotlight – like Geto, a human working with the Cursed to get rid of Satoru and bring Yuji to their side. In the second half of this set however, the chief antagonist is a Cursed of Geto’s creation, Mahito, who takes a bullied schoolboy Yoshino Junpei under his wing.

Just as it is getting good, we reach the last episode in this first volume and have to wait until the second half of this first season arrives for more. I suppose the fact I felt a pang of disappointment when this occurred means I had warmed to this show despite it being an amalgamation of numerous existing properties. The most common reference is Bleach but I saw traces of Naruto, Blue Exorcist, My Hero Academia, Black Clover, Soul Eater, and Fairy Tail as well.

Extending to the character designs, Yuji resembles Shirou from Fate/Stay Night, whilst Satoru with his spiky white hair and blindfold is a cross between F/SN’s Archer and Naruto’s Kakashi! MAPPA handle production duties and the artwork and backgrounds are stunning, truly the best asset of the show before the story kicks into gear, with the animation smooth enough to suit the show’s fantasy remit and add excitement to the fight sequences.

Admittedly, I had low expectations for Jujutsu Kaisen after the pacey, often confusing first few episodes in which we are hit with everything but the kitchen sink, but the dark turn of the script for the last few episodes revealed its potential. I’m not sure yet if this will become a genre classic like its aforementioned influences but for now, it’s a stronger candidate than other similar titles out there.