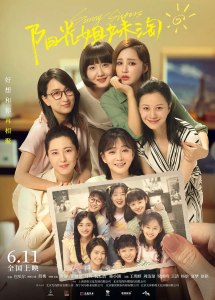 Friends are important in life – or so I’ve heard, I have none – and whilst many come and go, there are those who stay with you through thick or thin, allowing you to all grow old together. Unless that is purely in the movies.

Housewife Zhang Lijun (Yin Tao) is bored and lonely as her businessman husband (Tan Kai) is always away and her teen daughter Lie Lie (Li Zixuan) ignores her. When visiting her mother (Li Ping) in hospital, Lijun recognises an old friend in a private room, Lin Qing (Zeng Li). Catching up after 23 years, Lin Qing reveals she has terminal cancer and with no family, admits she misses her old school friends.

You can tell when you’ve made a film which has struck a chord as every other territory jumps on the remake bandwagon. The excellent Korean comedy drama Sunny appeared in 2011, and while it took a few years, the remakes started coming, beginning with Go Go Sisters from Vietnam and Sunny: Our Hearts Beat Together from Japan both in 2018 and Bebas from Indonesia a year later.

Not wanting to miss out, China has joined the fold with Sunny Sisters, directed by actor turned director Bao Bei Er. Now, I must confess it has been a decade since I saw Sunny, so my memory of it is very vague other than it being a wonderful film and my number 2 of the year. Therefore, I am unable to make any direct comparisons between the two films only of my enjoyment of them. Perhaps a rewatch of the original is due.

Cultural differences will bring some changes to the story, but, per Wikipedia, not that many, making this quite a faithful adaptation. Crucially, the song that binds the group here is not the Bobby Hebb classic Sunny but the oft-mispronounced Can’t Take My Eyes Off You, whilst one scene with political overtones is the school festival marking the return of Hong Kong to China (the flashbacks are set in 1997), likely a requisite for the nationalistic rhetoric quota Chinese cinema current insists on.

Much like Sunny, the story revolves more around Lijun in both timelines than the group as a whole. Adult Zhu Zhu (Jiang Xiahon) is a sales rep for a diet cookie company yet still can’t stop eating; Huang Xiaojuan (Zhang Xiniyi) lives a flush lady’s life though her husband is cheating on her; Yang Mei (Ma Su) is now a mother and oppressed wife; Qui Yuhong (Ni Hongjie), didn’t become Miss Hong Kong, instead is now a prostitute to pay for her sick daughter’s treatment.

Which leaves magazine cover girl Li Youran, who only spoke when she had something to say, but is brusque with Lijun. This is because Youran was from the same country town as Lijun, resenting the reminder of what she left behind, but they later become friends. Like Lin Qing, Youran protects Lijun from class bully Cao Jiahui (Jiang Yixuan) but with tragic consequences.

It is difficult to go into the plot details without turning this review into a sprawling essay, but the central thread is the group finding themselves again after finding each other. As happens in real life, not all the paths people expect to follow are open to them and fate has other ideas. For example, nobody could have seen rabbit toothed Lijun living the fine life or Lin Qing being a successful, multi-millionaire businesswoman.

Because this is a nostalgic comedy as much as it is a poignant drama, the teenage years focuses on the group antics, from fighting to singing and dancing, which if I recall, the Korean version balanced a little better in getting all the characters to connect with the audience, whereas her the sheer numbers game mean some, like Yang Mei and Yuhong stay on the periphery, though the latter’s modern day arc gets more time.

One thing both films get right is the casting with the two sets of actors creating the right chemistry to make this work. I remember the Korean youngsters being charismatic and fun to watch; their Chinese counterparts have a different sort of verve about them to avoid being carbon copies. Lijun is a real treat to watch thanks to a shining turn from 23 year-old Wang Yueting being shockingly convincing as a 15 year old.

Director Bao Bei Er ensures the adults are less like their younger selves to make the passage of time more credible than having these late 30-somethings be older replicas as you might see in a cartoon. This means placing the adult with the teen leads to some confusion if you don’t keep track of the names, but this has no bearing on the standard of the performances.

A nice trick Bao uses to great effect is in the editing to seamless flow from one timeline to the other; for example, adult Lijun might get on a bus and be obscured by someone but the shot returns with teen Lijun being seen as the person moves. And to heighten the emotional connection between the present day characters and their younger selves, Bao allows some physical cross over, symbolising the resonance of their past plights and how they grew from it.

Sunny Sisters really shouldn’t be as great a remake as it is considering how highly I rate the original, but kudos to Boa for taken the same story and crafting a retelling that feels as fresh, emotionally investing, and individual as its Korean antecedent.