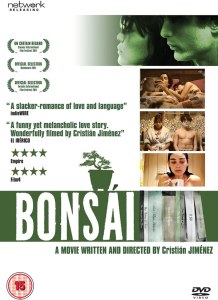 A relationship built on deceit is surely doomed to fail yet people can’t help themselves in spinning the odd white lie to win over the object of their desire. But how far should one be prepared to go in order to keep up the pretence before it gets too out of hand? And at what cost?

Told across two different timelines, the story revolves around Julio (Diego Noguera), an aspirating writer but an unproductive one despite a voracious literary interest. It is via this passion that Julio meets Emilia (Nathalia Galgani) while both are students, leading to a steamy relationship. Eight years later, Julio is still a struggling writer until he meets noted author Gazmuri (Hugo Medina), who needs someone to type up his handwritten manuscripts of his latest novel Bonsai.

Julio doesn’t get the job but wants to impress his girlfriend Blanca (Trinidad Gonzalez) so he pretends he is working for Gazmuri. To keep up the illusion, Julio writes the novel as he thinks Gazmuri would have, using his own personal experiences with Emilia as the basis of the plot, getting Blanca to help him with the transcription, hoping the story will win her over.

I don’t think I have ever seen a film that opens with a spoiler about the ending. “In the end, Emilia dies and Julio does not die.” says the voice over at the start of Bonsai. Well, that’s saved us 91 minutes then – or has it? An adaptation of a novella by Chilean poet Alejandro Zambra, Bonsai is an unabashedly literary work that is sort of about literature in how it plays into the lives of the main characters.

More likely, it will be viewed as a poetic (not in the literal sense) meditation on life and love and the mistakes we make in both, with books being the leitmotif to connect both timelines beyond Julio. The story lends itself to a rom-com in its broadest interpretation and would be more palatable for a wider audience if it was, but since the novel most featured in it is Proust’s seminal masterwork À la recherche du temps perdu, this would only work as a mainstream piece if Proust was supplanted by Jane Austen.

Before we go any further, I must confess I dozed off early in my viewing thus had to go back and play catch up via fast forward (yay subtitles!), but even by doing this, a lot of the story didn’t make sense until I consulted other write ups, then it fell into place. That said, the adapted script by director Cristián Jiménez is often lacking in major details, preferring to set the scene then build on it later.

For example, character names only appear when mentioned in conversation and not by way of a proper introduction, so it was quite a while before I learned Emilia’s flatmate was called Barbara (Gabriela Arancibia), who kindly but maybe regretfully, allows Julio to move into share Emilia’s tiny room. Barbara is an unsung hero of this tale, being the one true connection between past and present for Julio.

Well, there is one other (two if you count Proust) – the eponymous bonsai. In Gazmuri’s draft notes, his male protagonist buys his lover a bonsai tree; in Julio’s past, he and Emilia do the same as a proxy for a pet to have something to focus on together besides books and each other’s bodies. In the present, with Julio all alone, he needs a distraction and you can guess what he chooses.

Under the pretence of typing up Gazmuri’s novel and using his own story, Julio is forced to confront his past, which proves a cathartic but devastating experience for him, not in the least from it being a case of history repeating itself. As a student, Julio only claimed to have read Proust to attract Emilia, then borrowed a copy from the library to swot up on it (this leads to the film’s only good joke when he falls asleep in the sun, book on chest).

Now he is pretending once again to save face before Blanca, but she is a lot sharper than Emilia, noticing how Gazmuri’s writing style and tone had changed and the story lacking. Once Julio makes a concerted effort and digs deeper into his own history, his voice is the more prominent one, but it does begin to win Blanca over. In a nice touch to make the ruse as authentic as possible, Julio roughs up his notebooks and blemishes them with tea cup rings and nicotine stains.

Lying and being caught out on them is the obvious theme of this tale, but somewhere in the subtext is the mystery behind what Zambra was really saying – to wit: is this really an autobiographical story, even just in part? That would explain why the literary theme and references feel meta – I can’t decide if Zambra is showing off that he’s read Proust or the Frenchman’s works had a profound effect on his life, hence it feeling personal.

Regarding the dual timelines, the film is divided up into chapters with title cards to let us know which period they are set, so the jumping back and forth isn’t confusing. Plus, the fact Julio is beardless in his youth and practically a hippy when older is a handy indicator. One thing that doesn’t change is his laconic facial expression – his eyes seem to be searching for something but never sure what it is, belying what is going on inside his head and heart.

Suffice to say I liked the idea behind the plot, and would rather that was the focus but also understand the need to show both parts of Julio’s life to get the full picture of who he is. Jiménez has made an interesting if wilfully ludic film in Bonsai but not one with the immediacy I would personally have connected with. And I’ve read Proust – well, started to…