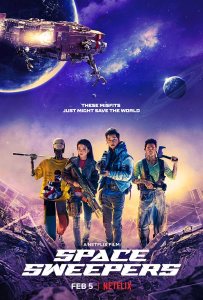 Serious question – should we really trust rich philanthropists? Obviously, nobody is going to do anything for nothing but when the wealthy reach out to do something that will benefit society on a major scale, can we be sure their generosity is genuine, or is there a less altruistic plan bubbling under the surface?

In the year 2092, earth has become uninhabitable due to pollution, so the world’s richest man, James Sullivan (Richard Armitage) CEO of UTS Corporation, has built an alternate home which orbits the earth, replicating its natural growth processes inside huge domes. However, UTS has limited its citizenship to the elite leaving the rest on earth until their ascension is approved.

For the remaining people, UTS governs them under strict regulations, with many forced to work as space sweepers, collecting debris and selling it back to the UTS factory for a small pay. One group of sweepers, led by Captain Jang (Kim Tae-ri), pick up a young girl (Park Ye-rin) hiding amongst some junk, believing her to be a robot bomb created by a terrorist group. Jang and her crew agree to sell Dorothy back to her owners but uncover a wider conspiracy along the way.

Korean sci-fi movies are extremely thin on the ground. I can think of 11:00am, Sector 7, and…well, anyway thanks to Netfilx, writer-director Jo Sung-Hee has been given the chance to go for broke and represent his country in this expansive and tricky genre with possibly the most demanding fanbase.

On the surface, Space Sweepers might invite comparisons to Guardians Of The Galaxy and the anime classic Cowboy Bebop with its cadre of rag tag anti-heroes surviving under their own rules and finding trouble on the way. Whilst this isn’t necessarily an origin tale, there is plenty for room for this to become a franchise since space is infinite and they are a cool bunch of dudes to hang with.

Jo hasn’t half-hearted the story either, despite some familiar facets within its DNA and uncomplicated narrative, he expresses ecological concerns for the safety of our planet, along with a serendipitous lashing towards social elitism and hidden agendas of the rich. Sullivan immediately gives off cult leader vibes, and the floating utopia he created is a dreamy futurism of blue skies, verdant sceneries, and pristine white uniforms, along with the ominous clinical sterility of it all.

Dorothy’s arrival to the ship brings a mixture of chaos and adult concern for the crew – on one hand, they don’t want her to explode; on the other, she is a cute little girl who brings out their protective nature. For Tae-Ho, this is a struggle since Dorothy reminds him of Su-ni. Curiously, it is Tiger Park who bonds with Dorothy the most, followed by Bubs, who has a male voice but identifies as female.

Certainly, this is a topical twist to add to a robot’s personality but at the moment, Bubs is all metal, her skin lost during military action, although her original gender is never disclosed. It may sound goofy or even divisive box ticking but it works and the character has such warm charisma, we accept it. In fact, despite their flaws, the entire crew win us over as the layers of their history are peeled back throughout the film.

By the time we get to the final act, we are now firmly in Marvel/Star Wars territory, with our heroes taking on the might of the antagonist with help from the rest of the sweepers in a deep space coalition battle echoing the climax of A New Hope. Left to the budgets from Jo’s domestic backers it is likely this would have been a bit to ambitious visually, but with Netflix money the SFX is spectacular, rivalling anything you see in Hollywood and provides great entertainment to boot.

With that in mind, Bubs is a CGI marvel and just as human in spirit as the rest of the crew, integral to the group dynamic which, through the magic of alchemy, is a believable collective. Also relatable are the supporting characters left to subsist on earth whilst the megalomaniac Sullivan and his chosen few live in idyllic luxury. Jo has created a two-tier cast system which feels scarily prescient if lie should imitate art in this respect which is very possible.

No doubt some will complain the social commentary is a bit fey within the context of a bombastic popcorn flick but Jo’s script balances the escapism with the realism sufficiently enough; the only complaint is the 137-minute runtime which as too much. The opening act is a little clunky in establishing the cast as the world of the sweepers, and only Tae-Ho’s background is explored in any depth, when the other are just as fascinating. Luckily, the cast flesh out the characters and create a connection with the audience through their performances.

Having debuted in The Handmaiden in 2016, Kim Tae-ri has been one to watch, choosing a variety of roles since then, each one different from the last, and Jang is no exception, showing more balls than the men. Song Joong-ki is the most human as the troubled Ta-Ho, oddly challenged by Yoo Hae-jin’s vocal turn as Bubs. However, it is difficult not to be enchanted and impressed by youngster Park Ye-rin as Dorothy.

If Space Sweepers marks the arrival of Korean sci-fi on the global stage then Hollywood might want to rethink any notion it has that it holds the monopoly on the genre. Smart, amusing, relevant, visually stunning, and hugely entertaining, this is a terrific film to start the K-SF revolution with.