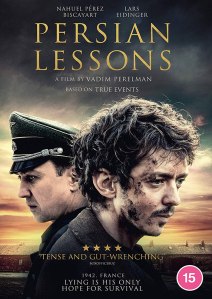 During the war – don’t worry this isn’t an Albert Trotter story – it is understandable how people would resort to duplicity to avoid being captured or killed. This was very true for the Jews who were relentlessly persecuted, causing many to hide their identities in the name of survival. Whilst limited, opportunities for a clever ruse were still present.

Gilles (Nahuel Pérez Biscayart) is a young Belgian Jew among those rounded up by the Nazis, on his way to a concentration camp. Another prisoner in the truck swaps his book of Persian poetry for a sandwich. When they arrive at the camp, the prisoners are shot except for Gilles who persuades the guards he is Persian and not Jewish, with the poetry book as confirmation.

Taken to the camp kitchens, the commander Klaus Koch (Lars Eidinger) sends for Gilles to teach him Farsi, as he plans to move to Iran where his brother is, and open a German restaurant. Gilles has no clue how to read, write, or speak Farsi so he makes it up in the hope he can stay safe as Koch’s teacher. With suspicions as to whether Gilles is being truthful, officer Max Beyer (Jonas Nay) tries to undermine Koch by exposing Gilles.

Based on a short story, Erfindung einer Sprache by Wolfgang Kohlhaase, which the DVD cover claims is based on true events, Persian Lessons has a premise that reads as ludicrous and improbable, lending itself more to comedy yet works remarkably well as a poignant drama. It is not without needing to suspend disbelief, but since the endgame is to make fools of the Nazis, I think it can be forgiven.

Ukrainian director Vadim Perelman approached this film as a prestige movie since it was the Belarusian entry for the 2020 Oscars, but was disqualified since the cast and crew were mostly from other countries. It is epic in feel and in tone, not in the least with its 122-minute run time, yet not every aspect of this grandeur is met, which will work either for or against it, depending on what you want or expect from this film.

Handsomely shot and evocative in atmosphere, this is a more sensitive film than others set during this period, therefore lacking the grit and discomfort of its depiction of the persecution of the Jews. Then again, with so many films existing which already cover this topic in harrowing detail, maybe this respite will be appreciated as refreshing, again, a matter of personal taste.

Superficially, the ruse Gilles perpetrates is genius if incredibly risky; he seems to be gambling on the fact Koch and the other Germans don’t speak Persian/Farsi, as well as nobody else in the camp who does. Gilles shows some ingenuity in pretending to be dead when his party are all shot but the guards were too smart, implying this is an old trick. But this is a temporary stay of execution, as Koch is very clear he will shoot Gilles if he is found to be lying.

At first, it is not discernible where Gilles gets his “Farsi” words from – when Koch inspects the book and sees an inscription signed “Bawbaw” and asks what it is, Gilles quickly says “father”. Plausible, I suppose in a phonetic translation sense. Tasked with coming up with forty words a week so Koch will have a vocabulary of a few thousand words, the pressure is on for Gilles to keep the invention and the façade alive.

When his own imagination for making them up runs dry, being upgraded to logging the intake of Jewish prisoners gives Gilles the idea of using syllables from their names. This would have significant impact at the end of the film as well as on his ability to remember all the words he taught Koch, as he was forbidden from writing them down. This does sound like something which *could* be true.

Meanwhile, as the relationship between Gilles and Koch predictably grows, a subplot involving Beyer jogs alongside the main story. He is flirting with Koch’s secretary Elsa (Leonie Benesch) yet is unaware officer Jana (Luisa-Céline Gaffron) is in love with him. Unfortunately, the pay off from this love triangle is a lame gag about Koch’s superior being under-endowed, doing little to legitimise Beyer’s campaign against Gilles.

One problem, despite the two main performances being compelling and the characters inhabited, we don’t know much about them or their history. Gilles obviously is looking to survive but we don’t know if this is simple self-preservation or if he has someone waiting back home for him. And what is there about him that he can improvise and create a new language with such skill? Is he an academic or some kind of savant?

Koch is ostensibly an archetypal Nazi camp general – barking orders, dyspeptic towards failure and disobedience, keen to work the system for his own gain. Yet his background as a chef (Koch is German for “cook”) and the fact he has a brother is the extent of his biography. A few hints about how his brother may have been a deserter and the safe choice of his post-war occupation imply he is not the warmonger his actions depict him as but joined the party out of romantic idealisation.

Perelman’s steady hand allows the drama to ebb and flow rather than pile on the misery, and whilst not the darkest of Holocaust films, he captures the hardship and bleakness of the Jews’ plight during incarceration with sensitivity but doesn’t shy away from ensuring our sympathies are in the right place. Thankfully, he is not heavy handed with it, staying close to his vision of this being a character driven affair.

Even with the curious but wholly enticing premise, Persian Lessons offers a less histrionic change of pace for the Holocaust drama but knows when to hit hard emotionally, whilst needing to trim some extraneous fat. A solid, well acted and engaging enough effort despite the niggles.