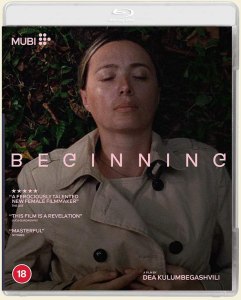 Religious persecution is a subject that doesn’t get the insightful probing treatment in fictional cinema as others do, presumably as there is no room for objectivity when giving those who inflict this a platform without bias from both sides. In this film, it seems like we might be heading in this direction but instead a maudlin, individual tale is told.

A congregation of Jehovah Witnesses attend their Sunday service in a quiet rural town when a firebomb is thrown through the doors, razing the building to the ground. In order to rebuild the prayer home, religious leader David (Rati Oneli) decides to meet with the elders in Tbilisi to help raise the funds, his tired wife Yana (Ia Sukhitashvili) opting to stay behind with their son Giorgi (Saba Gogichaishvili).

In David’s absence, a man claiming to be from the police in Tbilisi (Kakha Kintsurashvili) pays Yana a visit, asking her to persuade David to drop the charges. When she refuses, he makes an improper advance at Yana, leaving her scared and shaken. Trying to stay strong for her son’s sake, Yana quietly unravels at being trapped by external threats, but the worst is yet to come.

Jehovah Witnesses are like the James Corden of religion – even the other religions hate them – but how much do we know about them that they incur such hatred? Sadly, Beginning is not the film to provide us with any answers. Instead, first time director Dea Kulumbegashvili is adding her name to the many directors fixated with the restrictive claw hold of the patriarchy in her country of Georgia.

Frankly, the religious aspect could have been omitted and the story could have worked for all the importance it plays in it. Certainly, David’s stifling and dismissive attitudes towards Yana’s sense of aimlessness are party guided by his beliefs – she was an actress but in his eyes, she can’t be both that and his wife. But such chauvinism exists outside of religion in many cultures, rendering the faith angle almost incidental.

Presented in a 4:3 picture ratio and comprising on many long single take scenes, the visual allegory of Yana’s constricted existence is not lost on the viewer, whilst the mostly static camera is eerily voyeuristic through remaining at a distance. This is at its most heightened during a night time rape scene in which the audience wishes it could jump through the screen and end it but instead we are left feeling helpless and not wanting to watch any further.

A painfully quite film, many scenes are protracted beyond their usefulness regardless of how stunning the composition is, a polarising approach for some tastes. Beginning didn’t need to be 125-minutes long and this is the reason why, yet after the superb opening scene it becomes clear the silence is there to be broken. Shot in single take, a firebomb is suddenly flung through the door mid sermon injecting an immediate sense of energy and excitement into the proceedings, which it sadly is unable to replicate thereafter.

We don’t know who the attackers are – the only clue is the imposter police officer might be connected – a shame as this would make for a far more interesting film to learn why they hate Witnesses so much. As Yana grew up in the area she seems almost resigned to it whilst David isn’t so easily placated, upset that Yana doesn’t support his anger “like a normal person would”.

So we know where Yana stands in the marriage, making it uncomfortably horrific later in the film when David learns about the rape yet is angry at her for letting it happen. By way of light relief, and I use that term lightly, Yana is preparing kids for their upcoming baptism, including Giorgi, and whilst it lifts the tone as they have a good laugh at silly things, there is an air of menace at how readily they accept the teachings without question and recite learned by rote doctrine like they would a nursery rhyme.

Their answers to the questions “What is heaven? What is hell?” offers similar levity if only for the naivety of their interpretations based on what they have been told, but it could be argued this is a loaded question for a bunch of 8 year olds. Meanwhile, Yana is experiencing her own hell, trapped in both an unfulfilling marriage and in a society that has great expectation of her but never once asks how she is doing.

Likely to be the most divisive scene of the film – some will revel in its serenity, other will be bored stupid – Yana teases Giorgi by pretending to be dead, laying amongst the flowers in the park. As the poor boy cries for his inert mother, she is for the only time at peace. This scene, shot from above and concentrated solely on Yana, feels like it lasts for 15 minutes though it is probably half that.

Channelling Michael Haneke and Cristi Puiu, Kulumbegashvili’s filming style is a little too referential to single her out as one to watch based on this debut. She knows when to time her shocks so they come out of nowhere, whilst the naturalism of the quotidian is raw and gravid, but also often quite dull. The 4:3 picture ratio also works as a device for keeping danger out of sight, making it more sinister and ominous when left to the actors to delineate the mood of the scene.

Heavily rewarded for writing, directing, and acting – Ia Sukhitashvili is utterly compelling as Yana – Beginning has won Kulumbegashvili many fans. For this writer however, it is too ponderous and reliant on implied subtext in the lingering shots to feel emotionally connected, and god knows what that ending was. Although the photography is delightful, I’d have preferred a tighter investigation into religious persecution than another “female crushed by the patriarchy” drama, as well made as it is.

Definitely a “mileage will vary” film.