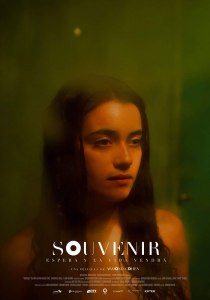 “Mirrors and copulation are abominable, since they both multiply the numbers of men…”

Parenthood is not as straightforward as it may seem. For a start, not everyone wants to have children, whilst not everyone can have children. Then they are those who do have children but end up separated from them via divorce or other unfortunate scenarios. Whether alive or yet to born, it is always the children who suffer…

Divorced literature teacher and lapsed writer Bruno (Marco Perez) is donating blood at a hospital when he is approached by a former student of his, Isabel (Paulina Gaitan), now a young woman. They exchange pleasantries then go their own way, until Isabel using her work database at a bank, tracks Bruno down and asks him out to dinner, after which they spend the night together.

After a few more dates, Bruno is visited at work by Joaquin (Flavio Medina) with whom Isabel lives to talk about her “situation” but Bruno has no clue what Joaquin means. Demanding answers, Bruno learns Isabel is carrying a baby for Joaquin and his wife Sara (Yuriria del Valle), but their possessive behaviour is driving Isabel to Bruno who, as someone who doesn’t want children, objects to the idea, but Isabel has her reasons.

In his feature debut, Armond Cohen tackles the subject of renting wombs or “host surrogacy”, which is where the surrogate carries the fertilised egg of both husband and wife rather than her own egg. Both situations incur many complex moral quandaries, which Cohen aims to cover in Souvenir, a brave move for a topic largely taboo in his native Mexico, hence the use of the term “substitute” instead of “surrogate”.

Cohen doesn’t scrimp on the melodrama, necessary in making the story palatable for the squeamish and avoiding didacticism. He posits all opinions as valid through a cast of characters each with their own flaws or personal reasons for their stance, allowing the emotional gamut of the situation to have different effects on the cast and the audience. That the script refers to it as a “situation” make it sound illicit, tawdry, or immoral, yet never loses sight of the fact a new human life coming into the world.

Unlike most other films, Cohen doesn’t give us all the information right away, even if it means keeping the reveal of the surrogacy until a third of the way into the story. Just like in real life where it takes time to get to know somebody and their business, this is the approach taken here, proving bold and refreshing, yet likely to frustrate less patient audiences. The upside is the lack of predictability meaning every development is ultimately high stakes in our view.

For Isabel, this is not about altruism but about a means to an end. She has a young son of her own Leon (Patricio Porras), but he is in the US with his controlling father, who is keeping them apart. Whilst not explicitly stated, we can infer Isabel is hoping to use the cash to either see Leon in person again, or perhaps even try to get custody of him. Not so clear is why she would begin a relationship with Bruno, but that is answered at the very end.

Bruno is a divorced because he didn’t want children but his wife did. At the very start of the film, we see him in a clinic about to have a vasectomy behind his wife’s back which the doctor tries to talk him out of. It is also implied the divorce coincided with Bruno’s inability to write, whilst a friend of his says Bruno is Tocophobic – afraid of parenthood. He is kept in the dark a little longer than we are about the surrogacy and is initially aghast at the whole idea, but it triggers his curiosity and he starts writing again.

The most difficult characters to get a reading on are Sara and Joaquin. When Joaquin jokes to Isabel when she moves in with them that Sara be in charge of the house, he isn’t kidding. Both have a dark, serious aura to them that makes people uncomfortable but that might be a result of the stress of Sara’s four miscarriages – that and their unsteady finances which are shrinking fast.

Where this is manifest the most is in how they treat Isabel, like she was a child and not somebody doing them a huge favour. Interestingly, it is hard to determine Isabel’s age as she looks and dresses like a teenager most of the time, but looks adult when at work or in uniform; then there is Leon who must be about 5 or 6, which puts her at mid-20s at best. Bruno is much older, as are Sara and Joaquin, yet he treats Isabel like an adult, with any concerns coming across as more protective that possessive.

Regardless of this aesthetic discrepancy, Paulina Gaitan is an absolute gem as Isabel. An arresting and engaging performance somehow suffused with understatement to make her character seem smaller than she is, the rawness she exudes is offset by the hysteria of those around her. Flavio Medina and Yuriria del Valle work hard in disguising the hurt and anguish of Joaquin and Sara that makes them monsters, like Marco Perez’s man-child Bruno, who, we are reminded, are only human.

Scripted by Ricardo Aguado, this is a surprisingly twisty tale given the subject is one that normally lends itself to a unfussy narrative. Much like childbirth itself, not everyone likes to know what is going to happen until it happens, giving this a sort of meta-allegorical spin. Despite how it paints an prickly picture of desperate people resorting to desperate measure, this is quite sensitive about the demonising of surrogacy and the emotional strain of it all.

Quite a provocative but humane debut, Souvenir offers much to debate about the issue of surrogacy, along with introducing us to Armond Cohen as an interesting new prospect in cinema.