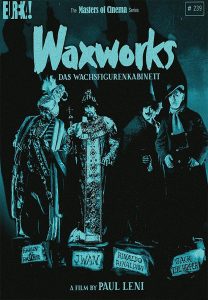 Have you ever wandered through a museum or art display, looked at the exhibits, and ever pondered the stories behind them? There must be something exciting about their history to warrant public display in the first place that we don’t always know about. If not, why not make up your own story?

A poet (William Dieterle) answers a job ad, finding himself at a waxworks museum. The proprietor (John Gottowt) and his daughter Eva (Olga Belajeff) welcome the writer and to test him, ask him to write a story for three waxwork dummies – Harun al-Rashid, Ivan the Terrible, and Jack the Ripper – to increase visitor’s interest. The poet notices that Harun al-Rashid’s arm had fallen off, giving him the inspiration for his first story, along with Eva as his muse as the two seem bewitched with each other.

In this tale, an impoverished baker (Dieterle) is married to Maimune (Belajeff). When smoke from the oven distracts the Caliph of Baghdad Harun al-Rashid (Emil Jannings) and causes him to lose a game of chess, he sends his Grand Vizier (Paul Biensfeldt) to bring him the baker’s head. Instead, the Vizier returns gushing about Maimune, and the Caliph plans to pay her a visit. Meanwhile, Maimune is fed up with their poverty, so the baker vows to make amends by stealing the Caliph’s Wishing Ring.

Story number two concerns Ivan the Terrible (Conrad Veidt), an evil Russian Czar who enjoyed torturing people and watching them die. His favourite game was to have them poisoned then watch an hourglass count their final minutes of life. But when Ivan learns that his poison mixer (Ernst Legal) was lenient towards a victim, he orders his execution. Realising his fate, the poison mixer writes Ivan’s name on an hourglass, leading Ivan to take drastic measures to avoid death.

Finally, a bit of a bait-and-switch as the waxwork of Jack the Ripper aka Spring-Heeled Jack (Werner Krauss) comes to life and stalks the poet. Of the three segments, this one is barely five minutes and – spoiler alert – is clearly a dream sequence anyway, serving more as an excuse to use optical effects in a present day setting if anything, to end things on a happy note as the poet and Eva get together.

Waxworks was the final film to be made in Germany by Paul Leni, prior to being whisked away to Hollywood by legendary horror producer Carl Laemmle. Originally, there were to be four segments in this film but money run out, possibly explain the brevity of the last story. Also, at the start, there are four waxworks but the writer is only introduced to three of them; knowing this budgetary issue makes this less conspicuous.

Like many films from the silent era, a complete version of Waxworks doesn’t exist. The original version was said to be around 100-minutes – the cut on this Blu-ray release is just 81-minutes, and even then, it drags a bit. However, it isn’t noticeably evident where the cuts may have occurred as the stories feel complete as they are, save for the rushed final part.

Blending historical fiction with German Expressionism is not new – Paul Wegener did it (twice) with Der Golem – but Leni pushes this a bit further with his interpretations of the lives of this legendary figures. In the first tale for example, the tiny house the baker lives in is painted in thick dark strokes, to create not just a sense of poverty but the gloominess and entrapment of living in squalor.

Maimune is essentially a prisoner in her own home due to her husband’s jealousy over the attention his wife’s beauty attracts from other men. Clearly, either being a baker wasn’t a profitable trade in Baghdad in those days, or he simply wasn’t any good! But, the way the home is painted carries that symbolism of it being a cell for Maimune, her only exposure to the outside world being the barred window through which she watches her husband.

This might explain why, when the lecherous Caliph comes calling at night, Maimune isn’t distraught but embraces his attention, as if he might be able to take her away from her miserable existence, even though she does love her husband. At the same time, the baker has snuck into the royal palace to steal the Wishing Ring from a sleeping Caliph. But hang on, he’s at the baker’s house wooing his wife so what gives?

You’ll have to watch the film to find to but it’s a cute twist and the sign of a good writer being able to use his surroundings to great effect. Nothing so ambitious for the story featuring Ivan the Terrible, but the Expressionist aesthetic is amped up a few notches to make the torture chambers of the Czar’s palace creepy and imposing. We fits see Ivan creeping through a passageway, his shadow looming large against the wall, his steely eyes burning through his bushy eyebrows.

Definitely unhinged, Ivan radiates twisted evil through his posture, paranoid mien, and requisite pointy beard. Having condemned the poison mixer to death, the story shifts to Ivan’s appointment as a guest at the wedding of a nobleman’s daughter (Belajeff again), but fearing for his life, he switches clothes with the nobleman to fool any assassins. Ivan then takes over the wedding party and ends up abducting the bride – and he wonders why people would want to kill him.

Each story has something different to say – less obvious in the final one for being so short – and is presented in its own unique style, but they are slow in pace. Had Leni sped things up, maybe they would have shot less and saved money to complete the whole script. That said, the influence of Waxworks on the triptych format is evident as is the stylings and atmosphere of horror films to come, even if this isn’t strictly horror. Inventive, if a little dull.