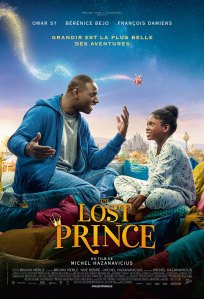 Being a parent is one of the hardest jobs in the world emotionally, from playing the bad guy when children play up to fretting over their welfare when they are out of sight. One of the hardest things for some is accepting their little babies are growing up and having to alter the way they interact with them, a potential source of ugly conflict.

Single father mechanic Djibi (Omar Sy) is raising 8 year-old daughter Sofia (Keyla Fala), a precocious young girl who adores her father. At night, Djibi tells Sofia stories of a heroic prince in a fantasy world he created – a fantasy we can see featuring Djibi as the prince and Sofia as the princess in need of rescue, played out like a film production, with the scripts dictated by Sofia’s interests in the stories.

Fast forward three years and Sofia (Sarah Gaye) is now at middle school and her father’s playful antics are now a source of embarrassment, especially since popular classmate Max (Néotis Ronzon) takes a shine to her. But the problem extends to the fantasy world where Sofia is now longer in Djibi as a prince and wants Max to be her hero instead, leaving Djibi shunned in both realities, which he finds hard to deal with.

This could have been an overwrought drama or hideously saccharine but director Michel Hazanavicius, of Oscar winning The Artist fame, instead opts for a whimsical approach to covering this age-old parental dilemma. Mixing vibrant fairy tale worlds with the harsher aspects of real life, The Lost Prince is superficially aimed at family audiences, except for some needless adult language that puts it just outside of Disney territory.

Disney does however provide an interesting comparison in relation to the story land Djibi creates in his mind, a magical kingdom where princes, princesses, dragons, fairies, and other attendant characters reside. Unlike Disney, this is a tongue-in-cheek existence with its Meta subtext of being a staged production with the characters having their own dressing rooms, a props and effects team in operation, and so on.

In this world, anything can happen and usually does based on whatever Djibi can invent and whether Sofia buys into it or not. For example, in the first scene, the prince, in his gaudy pink striped tights, finds a pair of flippers for his hands which allow him to swat away invisible birds and fly to save the princess from an ogre. His nemesis in these adventures is Pritprout (François Damiens), or El Farto in the subtitles, the rudest thing in this otherwise fairly clean and kiddie friendly fun.

However, Pritprout asks how long they can keep this up far, to which the prince replies, “it will never stop”. Famous last words indeed. It is as if Djibi didn’t get the memo that kids grow up, or maybe as a single parent, he has nobody to consult and steer him in the right direction. We feel for Sofia when the bus doors open after school and Djibi on board waiting for her, talking to her like a child in front of Max.

Perhaps Djibi needs a distraction – enter new neighbour, 30-something singleton Clotilde (Bérénice Bejo). She takes a liking to Djibi, but he never takes the hint; when she calls in under a typically shallow pretence, Djibi brusquely tells Clotilde it is a bad time and sends her away, leaving Clotilde to kick herself for being so lame. Although it is quite obvious where this is heading, it is not played out so obviously.

Meanwhile in the story world, the prince is confused when he is escorted off set to make way the new prince, the flashier Max, which also means a downsizing of his dressing from star to extra when needed. Unfortunately for the prince, he becomes an Oblivian – someone or something Sofia no longer thinks about – after Djibi and Sofia fight over her going to a party at Max’s house, resulting in Sofia sneaking out.

Oblivion, a dumping ground for Sofia’s past, echoing Toy Story in featuring a collection of old toys, now transparent from being faded memories. Only the Prince and Pritprout are human, the rest are CGI creations, more cartoony than realistic which some will write off as cheap and poor but they work well enough given this is a fantasy. That said, most of this world employs practical props and sets, it is only the wide shots that CGI takes over.

An interesting and fresh take on the compromised father-daughter relationship, there is plenty of mileage in the parallels between the two worlds, and Bruno Merle’s script does a wonderful job in making us wonder why nobody had thought of it before. The caveat however, is that the story is at its strongest when set in the fantasy world and the real world events are almost secondary.

Needless to say, the conflict between Sofia and Djibi is resolved with haste, leading to an equally rushed coda that brings the schmaltz the film managed to avoid for so long. You can see what they were aiming for and it gives us the uplifting ending we knew was on the horizon, it just needed more of the creativity that made the rest of the film such a joy to watch.

Giving their all are a strong cast, with Omar Sy being charismatic and a solid anchor in his dual roles, meshing well with Bérénice Bejo’s clutzy, amiable love interest and both incarnations of Sofia. Hazanavicius ensures the two worlds work independently of each other in tone, overlapping when the narrative calls for it and getting the blend just right so neither feel incongruent.

Where The Lost Prince succeeds is being a visually pleasing, amusing, and well-meaning piece of escapism that puts a different twist on a tender subject. Sadly, the rushed final act and cheesy coda jars with the inventiveness that precedes it is more of a shame than it is a crime.