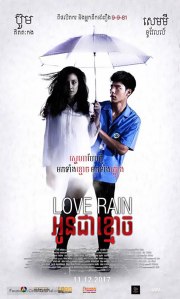 We all need a push in life and it can come from either somebody we know or an outside influence whose impartiality can make all of the difference. A little less likely is getting this encouragement from the other side – i.e. from a ghost who could do with a little support themselves.

Som (Sammy Cowell) works at a hair salon as the general dogsbody, then at night likes to play video games at an internet café where her skills are legendary. A bit of a plain Jane, Som is single despite many women trying to fix her up with someone. One night, Som stops by the local convenience store to witness rich boy Gap (Kitkong Khamkit) humiliate the shop owner Phon (Kapol Thongphup) and demands he apologies.

A tipsy Gap arrogantly tells Som to do one so she douses him in beer. The next day, Gap is aghast to get a call from his father informing him he is stopping his allowance as Gap hasn’t attended school like he should. Already in debt, Gap swallows his pride and takes a night shift job at the convenience store, where he is paid a visit by a familiar face – Som, now a ghost with no memory of how she died.

Love Rain (also known as Red Rain) purports to be a horror rom-com but doesn’t offer much to satiate either genre, unless there is something lost in translation. Since the English subtitles on the version I watched were awful, I am sure key facets of the story didn’t come across correctly whilst localised nuance may also have been compromised. But the gist of the story manages to seep through the maladroit translations even of the humour doesn’t.

They may not be well known on these shores but there is a palpable air about this film which suggests it was devised as a vehicle for its photogenic leads, with the prospect of a romantic frisson between them enough to encourage their faithful followers  to hit the cinemas in their droves. And with Kitkong Khamkit being the bigger star of the two, he gets the lion share of the screen time despite having the least interesting plot arc.

Gap is your off-the-peg arrogant spoiled kid believing the world revolves round him. He should be studying at university but instead spends the fees living it up at his father’s expense. When we first meet Gap, he is two timing another source of easy money, Ann (Wanvisa Khawnual) with a girl at a club, with whom he later scores, setting the mood for a romantic night by buying some booze at the convenience store.

In complete contrast, Som is a dowdy girl hiding behind baggy clothes and large glasses despite being obviously attractive regardless of how she is presented (Sammy Cowell won a Thai Supermodel contest at 16). She has her admirers though, like the Net café owner but she isn’t interested, enjoying single life albeit somewhat reluctantly – at least that is the inference.

Very little is shared about Som, other than she is ordered about at the salon and when her tacitly gay boss (yes, that was a joke) heads off to Paris for a break, Som moves into the salon. She wants to study at university but can’t afford it whilst her job doesn’t allow her the time to do so anyway. This is as deep as the dichotomy of Som’s hardships vs. Gap’s easy life goes.

Now working at the convenience store, Gap has to learn to take order rather than give them and do a honest night’s work (yet he still shows up for day shifts which is weird). A large portion of the film is devoted to Gap’s slow road to redemption in experiencing life as a pauper, with a painfully protracted and pointless ten minute segment with a friend of Phon’s telling ghost stories, designed to establish Gap is afraid of ghosts.

Had somebody – anybody – else written this script, this same thing could have been achieved in less than a minute, instead we get a rambling fool boring us to tears while his companions laugh their heads off, in case I wasn’t the only one aware this was the comedy portion of the film. But the scripting problems don’t end there, as it isn’t until 40 minutes into the 88-minute runtime that spectre Som appears.

Except she is no ordinary ghost. Unless it is a cultural thing, Som doesn’t walk through walls but does appear and disappear. She is also tactile as in Gap can hold her hand or carry her about rather than pass through her, but most incredible of all, Som becomes unwell in her current expired state. This isn’t your usual case of rigor mortis setting in, she suffers nosebleeds and her hair and teeth start to fall out.

Yes, this is one very confused script indeed and not being able to discern the correct meaning of the mistranslated subtitles doesn’t help much either. We are able to see that Som needs to know how she died before passing on and Gap decides to help her recover her memories, marking his belated first step to growing up and putting other people first for once. Yet, it still isn’t as sweet as it hopes to be unless I am too jaded for my own good.

Perhaps I am but I can still be positive so here goes: the film is well shot, and whilst the blue lighting for the night time scene in the shop creates a nice eerie atmosphere, we do wonder if the shop doesn’t have any light bulbs. Sammy Cowell has charisma by the bucket load, looks cute, and will be a great comedy actor; Kitkong Khamkit however, has the personality of tissue paper but will have young girls swooning.

Unless you are Thai, Love Rain will come across as a wasted opportunity to tell a cute ghost story, beset with narrative and presentation issues.