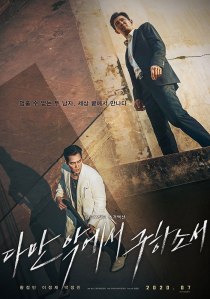 Everyone makes enemies in their line of work; it is inevitable with so many strong and diverse personalities brought together. In some jobs, this is not just inevitability but almost a job requirement, making it easier to deal with anyone who ruins your day – like a professional assassin for example…

Korean hitman In-nam (Hwang Jung-Min) is in Japan on what he thought was his final job to eliminate a Yakuza named Koreeda, having begun plans to retire in Panama. His boss Chun-sung (Song Young-chang) says there is one more job to do, but In-nam refuses and returns to Korea. The target was Ray The Butcher (Lee Jung-jae), Koreeda’s estranged psychopathic younger brother now vowing to avenge his brother’s death.

Meanwhile in Thailand, Korean real estate agent Young-joo (Choi Hee-seo) drops her daughter Yoo-min off at school, telling her the babysitter will pick her up, which she does but doesn’t takes Yoo-min home. With the Thai police being no help, Young-joo calls In-nam who doesn’t answer. Young-joo is then found dead and Yoo-min is still missing. Realising Yoo-min is his daughter, In-man heads to Thailand.

From the prolific writer of gory, intense Korean crime thrillers Hong Won-Chan, Deliver Us From Evil marks Hong’s second stint as director, following the quietly grim Office. Story wise, this is Hong in familiar territory, with morally ambiguous characters posited as anti-heroes in the seedy underbelly of a corrupt society, only this time, blood is freely spilled across three different Asian countries.

Taking on more of an action thriller than his usual, taut sinuous dramas, Hong presents us with a story in which the themes are less obvious because of the impressive litany of deaths and carnage on offer. It works as a standard tale of redemption whilst stealthily running alongside this is a crimson soaked parable on the futility of vengeance. Add in the fate of young children and we have the emotional hook holding it all together.

In-man is a ruthless, almost cyborg like assassin with a peerless success rate but he tires of this life of cold blooded murder to suit other people’s whims, and wants out. His past isn’t explored with any depth, restricted to one flashback from eight years earlier in which it is revealed he was an NIA agent alongside Chun-sung. The fallout from one case meant In-man needed to go into hiding, meaning he had to leave his lover Young-joo, unaware she was pregnant.

Actually, the maths are a bit off here as Yoo-min is repeatedly referred to as being 9 years old, something I am surprised wasn’t picked up on before, unless either Young-joo cheated on In-man or somebody dropped a clanger. But I digress. Having shut everyone but Chun-sung out of his life, In-man is still reluctant to help Young-joo’s until learning of her death, presumably at the hands of the kidnappers who she had gone to meet and broker a deal for Yoo-min’s release.

Over in Thailand, Chun-sung has set up a contact for In-man in Young-bae (Lee Seo-hwan) to serve as his fix it man. They learn of the fraud by the babysitter to get Yoo-min from Young-joo and hand her over to a gang of child traffickers specialising in selling children’s organs, with Korean kids commanding a higher price. Needing to get close to the gang, Young-bae introduces In-man to bilingual Korean transgender Yui (Park Jung-min) to pose as a client.

What they discover at the building is upsetting enough, the fact Yoo-ji had literally just been shipped off to have her heart removed pushes In-man over the edge. But getting to Yoo-min means over coming three obstacles – the police, local crime boss Lan Chaopo (Vithaya Pansringarm) who runs the city including the police, and a mad, heavily armed, equally dangerous Ray, hot on In-man’s heels having arrived in Thailand himself.

Here is where things get a little bit silly. The story is prickly and full of well-orchestrated moments of suspension and tension as In-man gets close yet still distant from Yoo-ji, and the action is a heady mix of explosive bombast and gruesome bloody violence the Koreans are noted for. The problem is in the indestructibility of both In-man and Ray. The punishment both men endure is staggering yet nothing puts them down for long, hence my cyborg comparison earlier in this review.

Stealing a page from James Bond, they are stabbed, shot, beaten, blown up, crash cars, and in Ray’s case, take on an entire swat team alone, yet are left with a few cuts and bruises. I get what Hong was doing in wanting to explore how an insatiable thirst for vengeance can become so consuming it robs people of their humanity, but in all honesty this Hollywood style spectacle threatens to take us out of the real life horrors of child trafficking, which needed to be a primary focus.

Conversely, the characters really flesh themselves out as the story progress when I am sure I wasn’t the only one who wanted more backstory, especially from Yui as the topical totem of a transgender woman. Park Jung-min is terrific in this role, the nuance and minutiae of his body language and affectations encourages us to learn more about Yui, whilst in the same vein, Hwang Jung-Min is such a versatile actor, he too makes us feel we know in-Man very well through his layered performance.

Director Hong may not be established like writer Hong, but after the psychological drama of Office, Hong set out to prove he can go big as well. Aside from a few issues with the editing creating a rush in the timeline, Hong successfully keeps the pacing brisk and the mood always on edge, and importantly, lets the characters come alive.

Granted, I might be nitpicking over a few things but without question, if you crave a violent, emotionally driven Korean action thriller, then Deliver Us From Evil is an easy recommendation, guaranteed to satiate your every need.