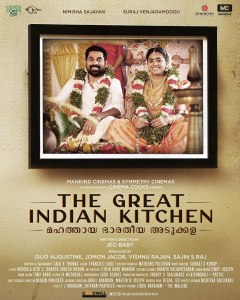 Back when I was a teen I had a Def Leppard T-shirt based on the track Women from the Hysteria album, where the word “women” was an acronym for “Worship Our Master’s Every Need”. Even then I knew it was cheeky but now I realise how awful an attitude this is and that in some countries it is not a joke but a reality.

An educated young dancer (Nimisha Sajayan) born and raised in Manama, enters into an arranged marriage with a teacher (Suraj Venjaramood) of a noted but deeply traditional and patriarchal family. Things are fine at first, the couple living in the same house as the groom’s parents Achan, (T. Suresh Babu) and Amma (Ajitha V.M.), with Achan doing most of the domestic chores with the bride helping.

When Achan’s pregnant daughter needs caring for, she leaves the household duties to the bride. The honeymoon period now over, she is no longer a wife or daughter-in-law but a slave to men who don’t lift a finger, make demands on how food should be cooked, and take her for granted. Tensions build as the bride becomes increasingly put upon, her freedoms compromised by these strict religious tenets.

To call The Great Indian Kitchen a vexing and emotionally galvanising film is like saying Donald Trump has silly hair. The latest film from Mollywood (aka Malayalam cinema) director Jeo Baby is a very on the nose with its bold critique of hidebound deference to antiquated religious mores. Yet, it isn’t an angry film or so blatant that in spelling out what is wrong, Baby tells the story and the audience draws its own conclusions.

No doubt, many Hindus will find this an offensive and inaccurate portrayal, leaving those of us on the outside to trust our instincts as to where the truth lays. Tackling issues of cultural traditions is always a challenge for filmmakers who face threats of censorship or worse, depending on the country, so this bravery should be rewarded by giving their films the attention they deserve.

Malayalam cinema isn’t the same a Bollywood, at least judging from this film, in which the overtly garish aesthetic and bubbly veneer of the latter is far from integral to its makeup. The film opens with the bride as part of a dance class, quickly followed by the awkward first meeting with her husband to be, and finally the wedding. Nothing too lavish except for the colourful attire, and bespoke customs that will seem odd to us.

It is barely 24 hours before the bride is in the kitchen helping make big meals, doing the washing up and cleaning the house alongside her dutiful mother-in-law, whose energy and willing subservience belies her age. Instead of the bride being her replacement so she can put her feet up, Achan remains active without complaint. She is shown handing her husband his toothbrush and toothpaste rather than getting it himself.

So it becomes apparent the rule of this family are the man is the lord and master and women are there to serve. Amma and his son eat together, the women only allowed to eat afterwards at the same table with empty plates and food residue all over it. Later, when the young couple dine at a chicken restaurant, the groom puts his bone on a plate. Wifey notes this surprise display of table manners, incurring an angry lecture amounting to “My house, I do as I like”.

Eventually, the bride wants to get a job but is shut down because “it doesn’t suit us” according to Amma – i.e. who will cook and clean for us? She applies anyway, getting another lecture from Amma, explaining with an unctuous smile that a housewife is more prestigious than a politician. Because the bride grew up in a progressive and modern society, she is chastised for not knowing about these backwards ideals.

However, the ultimate indignity is saved for when the bride has her period and is outcast and forced into isolation. For some reason, menstrual women are believed to be impure, and anything they touch is either washed or burned to purify it. Baby uses a recent scandal to put this outdated thinking into context – the Indian Supreme Court decreed the prohibition of menstrual women pilgrims at a temple in Sabarimala was unlawful, leading to protests from the faithful.

Of the many bold things about this film, the boldest is the how the first hour is almost an endless cycle of the bride going about her domestic and uxorial duties, a near non-stop montage of cooking and cleaning. It should be hideously repetitive and tedious; instead it is quite hypnotic, partly because actress Nimisha Sajayan is doing it all for real, but because we know the purpose of this is to experience the drudgery of the character, creating empathy beyond the superficial. Mileage will vary, naturally.

Jeo Baby captures the domestic scenes like a cooking reality show, each shot likely to either make you hungry or be sick at the sight of food. Everything is handsomely shot and as mentioned earlier, any Bollywood glitter is mostly absent save for the final scene. Personally, I felt this coda was unnecessary and the film should have ended five minutes earlier, but I suppose it was designed to give us a more upbeat ending.

Giving her all as the bride-turned-slave, I hope Nimisha Sajayan didn’t go home after filming to cook dinner for anyone, but her performance here is quietly powerful. We can see her vitality and vivacity be from her from scene to scene, and feel her frustration at being mentally crushed by the selfish expectation of domestic duty.

Divisive ending aside, The Great Indian Kitchen has a very important and topical message to impart and does so with a measured voice and total conviction. I think this could turn the most ignorant of men into a feminist by the end, it is that effective in showing shameful behaviour without the shaming.