Movie Review – Sheep Without A Shepherd 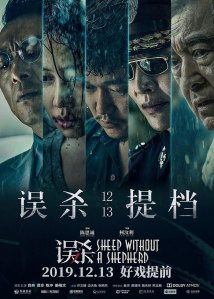 Sheep Without A Shepherd (Cert 15)

“Why do my actions have consequences?”

It won’t surprise you to learn this epigrammatic lament came from Homer Simpson, but for the people involved in this messy tale who should really know better, they learn this lesson for too late despite both being right and wrong in their reasons.

Suchat then blackmails Ping Ping with footage of the assault for more favours, but she tells her mother and in the midst of a confrontation, Ping Ping strikes and kills Suchat. Weijie was away the night it happened and when he returns, devises a plan that will divert police attention away from them, with a vengeful Laoorn and corrupt police officer Sangkun (Shih Ming-Shuai) putting pressure on them at every turn.

A remake of a 2013 Indian Malayalam film Drishyam, Malaysian-Chinese director Sam Quah applies the story to tap into the very current socio-political vein of police brutality in China and the Chinese government’s oppressive authoritarian stance over Hong Kong. To circumvent Chinese censors and possible jail, Quah relocates the setting to Thailand for Sheep Without A Shepherd but retains a Chinese cast in a case of having his cake and eating it.

That the film was a huge hit in China illustrates how much it resonates with mainland audiences, unless they were unable to read between the lines, yet I doubt the arrogance of anyone in authority would allow them to heed the message contained therein. The story seems pretty basic at first but veers off into a completely different direction of pure genius, a sinuous yarn of cat and mouse where the lines of morality are compromised in the name of justice.

For the first act, this could be mistaken for a well-meaning comedy – Weijie is a decent, hard working man with a passion for films, always watching videos at the office. Despite living in a big house – from being next to a cemetery – his wealth is modest, at odds with the expensive demands of his two daughters. An orphan with no education to speak of, Weijie gets by on his wits and charisma, a popular chap locally, with the exception of Sangkun who holds a grudge against him.

Meanwhile, Suchat is the arrogant rich kid spoiled by his mother, whose authority he hides behind for his wanton misbehaviour, and ignored by his politically ambitious father who isn’t afraid to teach him a lesson. The mayoral elections are upcoming and Dutpon is a frontrunner, so anything that might affect his campaign would not be well received by him; shame his son didn’t get the memo or he would still be alive.

By this point, it is a story we’ve seen many times before – arrogant kid with influential parents thinks he can act with impunity until he gets his, poor victims try to avoid being crushed by a biased system – and the direction henceforth is predictable, except it isn’t, not by a long shot. Recalling recent film watches – including Korea’s Montage and Billy Wilder classic Witness For The Prosecution – Weijie lays out his plan to keep the family in the clear.

Quah knows the Li family shouldn’t realistically get away with it, and as much as we are required to suspend disbelief towards what follows, the plausibility of it, and of course the ingenuity, forces us to capitulate. The askew morality at play doesn’t factor into why we are firmly on the side of Team Li, knowing their attempts to cover up Suchat’s death has to blow up in their faces.

Laoorn might be a walkover of a mother at home but on duty, she is borderline Gestapo police chief, only missing a swastika. This case is personal but as we know from a scene early on, Laoorn isn’t beyond a little malfeasance herself. Along with Sungkat’s grudge, Weijie’s popularity, and with minors arrested, public unrest against the police explodes. So, we have two wrongs not even attempting to make a right and it is such compelling viewing.

Revel in the beauty of the scripting, as the veracity of the Li family’s stories balances on a knife-edge; we know they aren’t lying and it is up to the police to prove it, and without solid evidence they can’t, but their counter rationale is also correct, which they also can’t prove. Yet, as much as we will the Li family on to be acquitted, we must also remember that a mother has lost her son, and Weijie’s Machiavellian plotting is denying her both the truth and closure.

Joan Chen’s impressive essaying of Laoorn plays a vital role in polarising audience opinion towards her, hoping the police chief gets all the egg on her face she deserves, yet feels for shattered, grieving mother in the denouement. Chen’s daughter Audrey Hui has yet to inherit her mother’s talent but this is just her second film. Xiao Yang leaves his Chopsticks comedy duo world behind for this dramatic turn as Weijie, supported ably by Tan Zhuo and cute junior Zhang Xiran.

Perhaps the biggest take away from this film is how assured and in control Sam Quah is in his debut feature. Having already truncated the story from the Indian original’s 160-minutes to less than two hours, Quah delivers a tight end product for a story that twists and turns with such frequency without missing a beat.

How you view Sheep Without A Shepherd – as either a message film or stirring drama – is your choice, but it is an accomplished, riveting, and emotional galvanising work and a high calibre debut nonetheless.