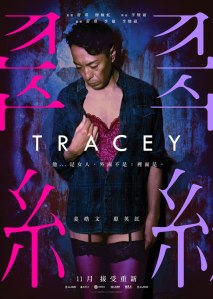 Gay rights in many countries are still a fantasy despite us now being in the 21st century. Whether it is because of religion or hidebound attitudes afraid of causing uproar, even those who view themselves as progressive thinkers still deny homosexuals some civil liberties. Hong Kong, it seems, falls into this category.

Tung Tai-Hung (Philip Keung) is a 51 year-old optician, married to Anne (Kara Wai), with a teenage son Vincent (Ng Siu-hin) and married daughter Brigitte (Jennifer Yu). One day Tai-Hung receives a letter informing him his war photographer friend Ching was killed in Syria, which leaves him devastated. Along with his other friend Jun (Eric Kot), Tai-Hung awaits the arrival of Ching’s ashes into Hong Kong, by somebody named Bond Tann from Singapore.

Bond (River Huang) does indeed arrive with Ching’s ashes but has another surprise – he was Ching’s husband! Despite their initial shock they knew he was gay, but for Tai-Hung this goes deeper. Every day, at work he secretly puts on women’s underwear to satiate the strong feelings of femininity inside him. A chance meeting with an old mentor, opera singer Brother Darling (Ben Yuen), who also has gender identity issues, sets Tai-Hung on a journey of self discovery and honesty.

A provocative debut from Jun Li, Tracey is an unashamedly on the nose dissertation on the oppression of Hong Kong’s gay community, but one smartly disguised as a palatable drama than a didactic outburst. With is slow build and sympathetic tone, the idea does appear more to encourage discussion than to shame prejudiced attitudes, all the while cheerfully standing up for LGBTQ recognition.

Yet the most important message being imparted here how behind the times Hong Kong is on gay and trans rights, which for a nation that prides itself on being modern thinking and inclusive, is surely an embarrassment. I don’t know if Li is gay himself, and I’m sure it doesn’t matter, but if he isn’t, there is something to be said about the silence of gay filmmakers in Hong Kong if Li has to take the baton on their behalf.

Politically, the closest the story gets to opprobrium is via the hassle Bond had in taking Ching’s ashes through Hong Kong customs. Not only did they question the veracity of his claim about the ashes but they refused to acknowledge the marriage (which took place here in the UK) between two men. Fortunately, Tai-Hung’s son-in-law Jeffery (Aaron Chow) is a lawyer and is on the case.

Li instead sticks with grass roots discrimination as his target, namely within the Tung household. Anne is conservative and snobby – she wants to fire her Indonesian maid because she has a boyfriend and is worried she’ll bring foreign diseases into the house. Vincent calls Anne on her ignorance and even calls her a racist; true enough, when pregnant daughter Brigitte reveals she has an STD from Jeffrey cheating on her, Anne dissuades her from divorcing this rich, lawyer philanderer.

Remember this for later when “woke” Vincent becomes the first one in the Tung family to learn his father’s secret. Until then, with this domestic prejudice established, the focus is on how Tai-Hung is forced to confront his own gender identity. Flashbacks reveal how close knit the trio of Tai-Hung, Ching, and Jun were, full of gravid homoerotic frivolity as they swim in a mountain river, teasing the odd moment of mutual affection.

Sharing a confused past is Brother Darling. A former Opera singer renowned for playing female roles he was beaten up in a restaurant for using the ladies toilets when the men’s were out of action. He then confesses to the three friends he is a woman trapped in a man’s body, something they don’t understand in the 1970s but they are sympathetic.

Now in 2018, Brother Darling lives like a pauper, occasionally singing to make ends meet, reuniting with Tai-Hung at a show Anne was singing at. Whilst this was catalyst for Tai-Hung to question his identity, he is further conflicted when a grieving Bond tries to kiss him, his reaction to recoil and leave. As he has for most of his life, Tai-Hung goes into denial but Bond, Jun, and Brother Darling can read him better than he can himself.

Even though it is clear from some, Li makes sure to differentiate between being gay and being either transgender or transvestite, which says a lot about Hong Kong audiences requiring education on this distinction. The standout moment comes when Tai-Hung and Brother Darling finally embrace their female selves in full make-up and garb and hit the clubs where nobody bats an eyelid. The point? There is no sign it is a gay club.

We can debate that the film runs a bit long at 2 hours, with the final 15 minutes acting as a protracted coda – albeit with a heart warming final scene – since everything was said in the intense showdown between Tai-Hung and Anne, who of course makes it about her. Fortunately, Kara Wai is terrifyingly on point in this role, a waspish bigot for whom normalcy is the only truth, and this scene may show her at her darkest but also her most human.

Having spent his career in support roles, Philip Keung first starring roles is probably not what he expected it to be, but like Tai-Hung, it is his coming out party. Carrying himself with a quiet dignity to hide the inner turmoil of his sexual identity, Keung leaves is usual thug/cop characters behind and blossoms like a butterfly, essaying Tai-Hung’s gradual arrival at his true self with sensitivity and panache, remaining oddly relatable despite the niche appeal of the role.

Unapologetic in delivering its message, the necessity for a film like Tracey probably says more about Hong Kong than Li’s blunt but accessible handling of the subject. Whether it has any effect remains to be seen but is a step forward for LGBTQ representation in HK cinema.