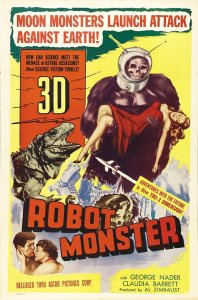 You’ve heard the expression “so bad it’s good”. Well, it doesn’t always work out that way and some things just can’t erase the negative stigma surrounding them. Films are a prime example of this, with many celluloid efforts bestowed a reputation for being god awful deserving of their ignominy.

Take this 1953 classic stinker, an ultra-low budget sci-fi opus that lives in infamy due to its cheapness, stolen stock footage, and derivative (also stolen) script, not to mention the now legendary costume for the titular Robot Monster – a gorilla suit with a space helmet shaped like a diving helmet with antennae on top!

Ripping off the plot from bigger budget Invaders From Mars which was released a month earlier, the story is set on an earth ravaged by the invading Ro-Men from the planet Ro-Man. Currently scouting the planet is Ro-Man Extension XJ-2 (George Barrows), Ro-man hereafter, who has discovered six humans remain alive, and his orders from the Great guidance (Barrows again) is to eliminate them.

Hiding nearby are an archaeology professor (John Mylong), his wife (Selena Royle), daughters Alice (Claudia Barrett) and Carla (Pamela Paulson), son Johnny (Gregory Moffett), and the Professor’s assistant Roy (George Nader). They have created a serum that rids all known diseases and also makes them immune from the Ro-Man’s Calcinator Death Ray, forcing Ro-Man to find another way to kill them.

Sounds exciting but frankly isn’t for reasons that soon become obvious and not just due to the absent budget either. I should explain that the film actually opens with Johnny and Carla playing spacemen at a cave where Roy and the Professor are working when they are called in for dinner by their mother. This is actually significant as it relates to a twist ending, which was just one of the ideas screenwriter Wyott Ordung pinched from Invaders From Mars.

Johnny then later returns to the cave to play but hides when Ro-Man appears behind his giant bubble machine (nope, me neither) and eavesdrops as Ro-Man communicates with Great Guidance via a proto-video monitor. No bubbles for the Guidance but he does get a violin bow to wave around and a static electricity gizmo for his desk. I guess $16,000 only went so far in 1953.

Anyway, Ro-Man is told he must wipe out the surviving humans before returning home, though the motives for this are somewhat vague, vacillating between taking over the earth or attacking humans before they attack them because this race of gorilla robots think earthlings are barbarians. They are the ones intent on wiping out life on an entire planet and WE are the monsters?

In the meantime, we learn there are two other survivors ready to take a rocket ship to a space station somewhere which has a stock of the serum but they don’t want Ro-Man to know. So Alice devises a plan to rewire their video communicator to prevent the video signals from being intercepted. These people are living in a dilapidated building with no roof but have a fully functioning video monitor?

Unfortunately, Johnny goes to taunt Ro-Man about how his death ray is useless against him but blabs about the rocket ship, which allows Great Guidance to blow it up by firing lightning bolts from his fingertips. The footage for this sequence comes from two other films, Rocketship X-M and Flight To Mars yet they STILL look cheap and nasty! For the record, the oft-repeated clip of lizards fighting was pinched from Man And His Mate and the stop motion dinosaurs from 1951’s version of Lost Continent.

But Ro-Man discovers another way to kill the humans – strangling them – although he becomes conflicted when he spies Alice on the video monitor and seemingly falls in love with her. Bearing in mind, Ro-Man is a robot and, as reminded by the Great Guidance, they are superior to humans through not having emotions, this is an odd development, that and the fact Alice marries Roy at one point.

Let’s be fair, this is an interesting idea and one that has resurfaced many times in sci-fi stories where robots, androids, and now AI develop human emotions but this script just doesn’t have the wit, the depth, or the desire to explore it properly. Add in the fact the film only runs for 66 minutes and half the screen time is wasted on nonsense anyway, it is not difficult to see why this is has become such a joke.

However, there is one interesting thing to note – the musical score was by one Elmer Bernstein! How is this, you may ask? Well, this was during an era when Hollywood didn’t care for left-wingers like Bernstein so he took whatever work he could get. No surprises that the score is arguably the best thing about this film.

Caught in a similar situation to Bernstein was cast member Selena Royle, a victim of the McCarthy-era witch hunt that saw her stock diminish as a result and this would be her penultimate film. George Nader went on to win a Promising Newcomer award in 1955 by people who clearly never saw this film, whilst Claudia Barrett later admitted she enjoyed making this film – well it was only four days work!

Less fortunate was director Phil Tucker who tried to commit suicide after the negative reviews for the film and from not being paid for his work on it. Even when released in 3D (the old type with the red and green overlay) the film was still slated but it did make a profit of $1 million to its $16,000 budget – but Tucker was refused his cut. That’s just cruel!

Robot Monster is irrefutably and hilariously bad, maybe not intentionally or irredeemably so when you pay attention to the rare nuances and potential of the pilfered story, but its reputation of one of the worst films ever is justified. Check it out on Amazon Prime – if you dare…