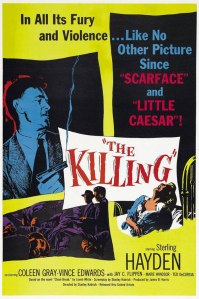 “I love it when a plan comes together”

The popular catchphrase of Hannibal Smith from the The A-Team was usually uttered to mark the success of another adventure. It was in the planning. If you don’t have that then what do you have?

Ex-con Johnny Clay (Sterling Hayden) is planning an audacious robbery at a racetrack with $2 million up for grabs before he settles down and marries his fiancée Fay (Coleen Gray). Assembling a group of men all in need of or desiring a nice cash injection to their fortunes, Clay concocts a plan so meticulously laid out and timed to the second it can’t possible fail.

However, one of the men George Peatty (Elisha Cook Jr), inadvertently mentions the job to his gold digging wife Sherry (Marie Windsor) to stop her from leaving him. She then tells her younger lover Val (Vince Edwards) and they plot to steal the money from the gang after the robbery. With all the pieces in place, can Johnny and the boys pull off this heist successfully or will Val’s interference ruin it?

Stanley Kubrick is considered one of the all time great directors yet even he had to start at the bottom and work his way up. Based on the novel Clean Break by Lionel White, The Killing was Kubrick’s third film and the first one to get him noticed after a few zero budget flops. Ironically, The Killing was also a box office flop but its popularity among the critics impressed MGM enough to offer Kubrick and producer/collaborator James B. Harris the chance to make their next film, Paths Of Glory.

As is the fate of many classic films, The Killing might appear to be little more than a checklist of noir/crime thriller clichés to modern eyes, when in fact these conventions began with films like this. It’s a sprightly film of just 84-Minutes long and can essentially be broken down into three parts – the planning and preparations, the actual heist, and the aftermath.

Because of this, not all of the characters are particularly well fleshed out but are given enough time to establish their motives for participating. With Sherry’s interruption of the gang meeting, George is identified as the cuckolded husband who can’t believe a girl like Sherry would marry him (and neither can we), yet his delusion about how genuine her love is for him is matched by his jealousy.

George is a window teller at the racetrack and Mike O’Reilly (Joe Sawyer) is a bartender, with a sick wife, whilst corrupt cop Randy Kennan (Ted de Corsia) is heavily in debt to the mob. Johnny seems to encourage loyalty from many people – an old friend Marvin Unger (Jay C. Flippen) puts up the money to buy the firearms and other necessities, and ex-wrestler Maurice Oboukhoff (Kola Kwariani) also takes part for his old friend.

Finally, Johnny hires sharpshooter Nikki Arane (Timothy Carey) to be the man to sets the whole thing in motion on the day of the heist, again someone willing to play a part in this for a nominal fee without accepting a cut from the loot like Randy, Mike, and George are. The conceit of this operation is that not everyone is actually crooked, and Johnny is apparently mindful of this which is why he is careful in choosing who is directly involved and who remains on the periphery, though every role vital to its success.

Complex in concept and with so many working parts that rely on precision timing and desired responses from people not involved, notably the public and the police, it is easy to see how this genre has been parodied. Yet, we are in awe at how much thought has gone into this, notwithstanding the absence of technology to both help and hinder them, giving it credence hard to find in heist movies made today.

With this being a criminal activity, the audience is not supposed to root for the gang to succeed, hence Sherry and Val’s interjection into the proceedings to subvert this moral ambiguity, giving us a reason to want them to prevail. Admittedly, there isn’t much tension built during this part of the film, but there is a sense of anticipation and curiosity in seeing if the plan will be executed to the letter.

Kubrick compensates for the lack of tension by creating a different atmosphere through the camera. Unable to fulfil the role of cinematographer and director, Kubrick brought in veteran Lucien Ballard with whom he fought a lot but the results are worth it. Relying on long single tracking shots, the camera follows the cast through many rooms of a single apartment, shot from down low for a sense of gravity.

Movement via the camerawork is a key facet in helping the film speed along without the viewer being wary of the time, and this tempo is also the reason why the actual heist seems remarkably short. To pad it out, key scenes are shown from different perspectives rather than cutting in the action taking place elsewhere, presumably from not wanting to interrupt the flow of what is happening.

Of the cast, I only know Elisha Cook Jr which is just as well as I felt he was one of the stronger performers here as George, belying his pathetic look and stature by bringing an aura of danger to his paranoia, exacerbated by the shifty Sherry, a different sort of femme fatale as essayed by a charismatic Marie Windsor. Former wrestler Kola Kwariani is actually quite personable and warm, unlike Sterling Hayden, a rare protagonist able to keep the audience at a safe distance.

Quite how The Killing didn’t fare better upon its release is a shame as it not only brings something daring, clever and visually intense to noir cinema but it heralded a new talent destined for greatness. Talk about missing the boat, but as we know the best was yet to come from Mr. Kubrick.

2 thoughts on “The Killing”