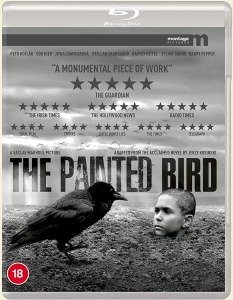 Survival is something we all have to do in our lives in one way or another, but are forced to some start earlier than others; war, for example, being a prominent cause for this. The fortunate ones will get help when they need it but again this can prove a lottery at a time when many are preoccupied with looking out for themselves.

A young, unnamed Jewish boy (Petr Kotlár) in an undisclosed war torn Eastern European country has been sent by his parents to live with his aunt (Nina Shunevych) in the mountains to stay safe, but she dies and the boy begins a long journey home. At every stop along the way, the boy meets and is taken in by many different people, some kind, most utterly cruel, yet somehow he keeps his resolve and carries on.

For Czech director Václav Marhoul, he couldn’t have made a more divisive film than The Painted Bird. It is adapted from the 1965 novel by Polish World War II survivor Jerzy Kosiński, originally promoted as autobiographical but later admitted to be a work of fiction. It didn’t sit well with everyone as the novel was banned in Poland for being anti-Polish and not published until after the fall of the Communist government in 1989.

Marhoul, like many, saw something in the novel and was determined to film it, having to wait until Kosiński passed away to secure the rights, which he finally did in 2012, then spent the next seven years writing numerous drafts of the script, getting the financing, and then the filming. This took two years to allow Petr Kotlár to age naturally across the time span of the story, the lad being just 9 years-old when they began shooting.

It is hard to imagine how Kotlár’s callow, impressionable psyche survived being exposed to such grim, harrowing vicissitudes even in a fictional context; perhaps the breaks in between filming helped, but he still had to face new challenges once the prior ones were behind him. I sincerely hope there was child psychologist on set for Kotlár but also practices in place to ensure he didn’t see half of what his character does.

The film’s title refers to a scene during the boy’s stay with a bird keeper (Lech Dyblik), who paints a bird’s wings white then lets it loose as a flock of its fellow birds approaches. As the flock don’t recognise the bird as one of them, they attack it, tearing it to pieces, its ravaged corpse finally plummeting to the ground. As metaphors go, this is savage but also one of the lighter moments in the film, philosophically and graphically.

Over the course of the boy’s eventful journey, he witnesses a mink being burned alive, accidentally burns his aunt’s house down, is beaten by almost everyone he meets, labelled a devil child by a shaman, raped by a paedophile, sexually assaulted by a raging nymphomaniac who he then sees fornicate with a goat, watched a man gouge another man’s eyes out with a spoon, was almost drowned, is captured by the Germans, and ends up killing two men – all before turning 12 years-old.

How can one boy endure such hardships and not just give in and end it all like many an adult would have? It is almost as if he is a glutton for punishment, moving from village to village, beating to beating, abuse to abuse, with no lesson learned. At least this is the case initially – by the end of the film, he is a world weary and cynical as someone three times his age, having learned than nobody is worth trusting.

Each time the boy thinks he has landed on his feet, tragedy or revealing of true colours plunge him right back into this endless cycle of physical and mental abuse. The ultimate betrayal comes when he is taken by kindly priest (Harvey Keitel) as a choirboy only to be sent to live with a paedophile Garbos (Julian Sands). Quite what it is that makes the boy such a magnet for this litany of hatred and mistreatment is never explained, outside of the obvious anti-Semitism when in a town or under the Nazi’s radar.

Marhoul’s decision to film in black and white was arguably the correct one is lessening the visual impact of the violence, but not by much, along with the austerity it creates as much of the film is set in bucolic locations where modernity, even for World War II, has not yet arrived. The use of shadows is not accidental nor an affectation, proving vital for highlighting the hopelessness and claustrophobia of the stark impoverished existence.

Joining Keitel in providing some name recognition to this film are Udo Kier as the eye gouger, and Stellan Skarsgård as a compassionate Nazi soldier. Their roles are small as not to overshadow the immense main performance from Petr Kotlár, who does more in this one film than most actors will in a lifetime. As hard as it is watch most of the material here, it is worth it for Kotlár’s performance alone.

The Panted Bird is a difficult film to settle on a definite conclusion about unless you are able to see past its contentious themes, unfettered bleakness, and defiant outré, and recognise it as a powerful, committed work and labour of love for Marhoul. Conversely, one can also respect the opinion of it being a near three-hour run of black and white arthouse debauchery, deviance, and animal cruelty with nothing to say, since this is a film about the journey and not the destination.

Few films hit hard and remain in the memory like this one but its rewatch value is as close to zero as it gets unless there is a need to find something you missed first time. Love it or hate it, this film is a stupendous piece of visual phantasmagoria as much as it is a blunt and unforgiving torture of the senses.