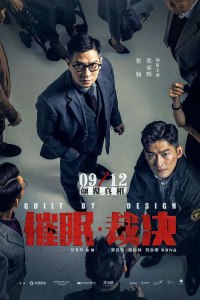 Court cases are supposed to be tried by a jury honest and true in their deliberation and verdict. But since many on trial are criminals, they are not beneath influencing a jury to acquit them of their crime – it’s how to knobble a jury that is the problem…

Hui Lap Seng (Nick Cheung) is a former hypnotist turned psychology lecturer chosen as one of the seven jurors for the case of a young heiress of a multi-national company, Lam Tsz Ying (Renci Yeung), accused of killing her uncle for his share of the inheritance. Despite her father Lam Kowk Kuen (Paul Chin Pui) knowing she is innocent, he hires bent cop Tang Siu-Keung (Eddie Cheng) to fix the verdict so she is convicted anyway.

Along with having someone on the jury to ensure things run to plan, Tang has Hui’s daughter Hui Chun-Yan (Ai Mee) kidnapped, then through an ear piece, instructs Hui to hypnotise members of the jury to guarantee the requisite majority vote of five to seal Tsz Ying’s fate. Hui has 90 minutes to complete the task or his daughter dies, and whilst he complies, he isn’t prepared to give in that easily either.

Guilt By Design sees three up and coming Hong Kong/Chinese directors come together, under the guidance of producer Derek Yee, hoping to follow in the footsteps of the Hong Kong crime drama greats like Johnnie To, Herman Yau, Ringo Lam, and Yee himself. The evidence is this young trio have studied the masters well but maybe a little too well, with the old aphorism regarding too many cooks threatening to be quite apposite.

There is no denying the central premise is rather appetising, offering a fresh and unique take on the classic 12 Angry Men (with only four of the seven jurors needing converting), the challenge is pulling it off. Giving themselves just 90 minutes to do so means there is little room to breathe, thus we jump right into the introduction for Hui and his hypnotic skills, making it plain he is the only character with any narrative depth.

Fortunately, this is a rare example of where relying on family tropes has its benefits, allowing the audience get a quick reading on the characters without needing too much elaboration. Hui’s athletic daughter is predictably cute as a button girl and missing her busy, single father at her races, relying instead on her uncle, Hui’s brother-in-law Yang Kai (Hans Zhang Han), for support.

Yang Kai giving Chun-Yan a watch with a tracker in it is not an accident, neither are the brain teaser puzzles shared by father and daughter, which you don’t need me to tell you will become factors later on. When Chun-Yan is kidnapped, Hui sends the threatening phone message to Yang Kai who immediately leaps into action – and I do mean action – providing some physical thrills to contrast the psychological tension in the jury room.

Smartly, in the case of the jurors they haven’t been completely predictable and chosen a blinkered bigot, or agitated business man for whom time is money, but have given them a quirk or condition Hui must exploit for his mission. Fong Wai-Shan (Cecilia So) is a timorous wheelchair bound young woman haunted by her own court experiences; and business woman May Yim (Jo Koo) bought shares in the Lam company and expects a huge windfall when Tsz Ying is acquitted.

One of Hui’s students, Chan Wing-Hei (Babyjohn Choi) is also on the jury and he suffers from some form of epilepsy, leaving non-nonsense Mrs. Lau (Elaine Jin), smarmy Chow Yung (Sheung-ching Lee), and foreman Leung Sir (Kent Cheng) to round off the group. One by one, Hui must choose a victim and surreptitiously use their weaknesses against them to either change their vote or eliminate them from the jury altogether if need be.

It’s a tall order within the confines of a rather sizeable deliberation room, which is why the script goes into contrivance overload in depicting Hui’s hypnotic conquests without any apparent consideration for credibility. Hui’s regular trips to the toilet to converse with Tang don’t go unnoticed but can be forgiven; spending almost three minutes under a table with May Yim while he uses a pendant on her is stretching things a lot, and although it does factor into the story, would not fly in real life.

With explosions and injuries not limited to the car chases and shoot outs involving the pursuit of the kidnappers, it is a miracle the judge and the court bailiffs don’t suspect something with so many mishaps occurring in one room inside an hour, nor do they question it. This is all topped by a final act Jackie Chan would be proud of in terms of extravagance but also the reason some might find this film hard to swallow.

Despite these elaborate missteps, this is a still an enjoyable outing with a strong story and neat twists to hold out attention, the streamlining of the narrative due to the brisk run time working in its favour. Ideally, the psychological aspect of the hypnosis angle deserves greater attention as would getting to know the characters better, but even in this functional form it somehow maintains an air of curiosity about it.

Led by the always dependable Nick Cheung, the cast do their most to keep things afloat, choosing to ignore whenever things get too preposterous, drawing the audience in as much as the fast paced action does. It’s a bit of a patchwork affair, on occasion feeling like two separate films with the tense court room drama intertwined with Yang Kai’s adrenaline rush rescue mission, but amazingly comes together by the end.

Guilt By Design might suffer from a surfeit of ideas and genre conventions but is no less a decent quick fix watch for Hong Kong film fans. Directors Sze, Lai, and Lau all show promise and work well together, but maybe might flourish more separately.