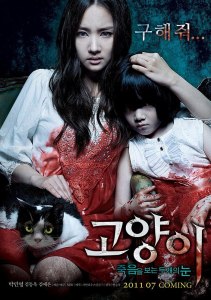 If you follow me on social media or note the occasional comments on this site, you’ll know I am a dog owner of a pug named Penny. So, you’ll forgive me if I concur with the theme of this Korean horror which suggests cats are evil! Just kidding cat lovers, nothing against them personally, though this film might not be what you expect…

So-Yeon (Park Min-Young) is a pet groomer working at a salon for a man (Lee Han-Wi) who seems to hate animals. A rich client (Yoon Ga-Hyun) collects her temperamental cat Bidanyi as So-yeon and returns home, but dies under mysterious circumstances in the lift to her apartment. Police officer Joon-Suk (Kim Dong-Wook), a friend of So-yeon’s, asks her to take care of Bidanyi while the husband grieves.

Meanwhile, So-yeon’s friend Bo-Hee (Shin Da-Eun) visits a cat shelter to adopt a cat, but the next day, Bo-Hee is found dead in her closet. Strange things also happen around So-yeon and Bidanyi that revolve around a little girl with cat-like eyes (Kim Ye-Ron), so she takes him back to the original owner, who believes the cat is cursed and she should let him go. This however, doesn’t stop the weird happenings around her.

You might be wondering how a two word English title like The Cat can have such a long original translation – in fact, the full Korean version is The Cat: Eyes That See Death, not just a mouthful but also a bit of a giveaway as what to expect. Then again, it doesn’t give everything away, but given how the cursed video/phone/house concept has been a staple of Asian horror for decades now, there are few surprises either.

Either way, feline fans might find this a bittersweet experience – there are cats aplenty to adore but they are mostly vicious beasts, and some end up in some dire situations. But don’t fret because right before the end credits there is a disclaimer announcing that no cats were harmed in the making of this film. I hope that makes you feel better!

By now, you may be wondering why the cats are considered cursed and biting back at us humans. Well, that is what So-yeon and Joon-suk intend to find out though it takes a while to connect the dots between the deaths and the cats. For So-yeon, she is more bothered about the little girl with the bob hair cut and green eyes like a cat who appears before her in the most unusual places, like under her bed.

As it transpires, the little girl gets about a bit, surfacing in Bo-hee’s flat as she tries to practice her grooming on her adopted cat Dimwit. He runs into her closet with Bo-hee in hot pursuit but only one of them comes out alive, thanks to the owner of the evil green eyes hiding in the dark. The police might have realised this but So-yeon starts to wonder why cats seem to be the common denominator in two deaths and the weirdness in her own life, but that of course would be silly, right?

Not really, as we wouldn’t have a film but I digress. Whilst the connection between the cats and girl seems tenuous at best even to the audience, it is not even a consideration to the police, since So-yeon is the only one who could see her. But a visit, to the old lady’s husband reveals she too spoke of a young girl haunting her, soon after Bidanyi was adopted and brought home.

Like any good horror protagonist, So-yeon has a weakness: claustrophobia, following a childhood trauma. If she is ends up in an enclosed space, which of course happens a lot, So-yeon starts to hallucinate and experience weird things, giving director Byun Seung-Wook a chance to mine the “Favourite Cinema Scares” playbook for these reality-bending apparitions.

For example, following Bo-hee’s death at the hospital, So-yeon is forced to take the lift with two male nurses and Bo-hee’s body, when he panic attack kicks in (ignored by the nurses) and the body start moving, grabbing So-yeon’s arm, before she snaps back to reality. As much as the concept is different, many of the scares aren’t so fresh and can be seen coming a mile off.

What we have learned from Asian horror is that a vengeful spirit has to have a reason for terrorising the living and it is often rooted in tragedy. This is very much the case here too, perhaps testing the limits of credibility but that is an inherent trait of horror cinema. The big issue is the story surrounding it and how the ramifications of it got so out of hand and for so long.

There is a dark, melancholic streak running through this film pushing it closer to being more depressing than scary, partially down to the general absence of a usual foreboding musical soundtrack, but in much of the subplot that is just decidedly bleak. The horror is quite pedestrian it has to be said, but the film is not short on horrific moments; in one scene, a cat is about to be put down at the cat shelter, and the (animatronic) look of terror on its face as the man tries to inject the needle is nightmare inducing.

Despite being the unwitting lead and her struggle with claustrophobia, So-yeon is not the best-drawn protagonist, leaving Park Min-Young to rely on her ability to engender sympathy through her natural amiability to compensate. This is not a sleight against her fine performance, more against Byun not being sure how to get to the best from her when some of the secondary characters are better defined.

Ironically, there are no black cats in The Cat, but plenty of other fiery felines to keep the fans distracted from the uninspired plotting and lacklustre scares. The ending is stronger than the build however, in what is a sadly derivative and underperforming variation on a well-worn theme