George Méliès’ A Trip To The Moon

George Méliès’ A Trip To The Moon (Cert U)

One of the most enduring and iconic images in cinema history adorns the front cover of this Blu-ray release of one of the most famous and influential films of all time, and even if you don’t know the film itself or have seen it, you know that the image comes from it. This may sound like a paradox but it is somewhat fitting.

A Trip To The Moon (Le Voyage dans la Lune) was made in 1902 and is the first science fiction film. Its creator George Méliès, a magician, artist, and musician before turning filmmaker, had already dabbled with visual effects in his previous films dating back to 1896, and although these barely lasted three minutes on most occasions, they were enough to blow the minds of audiences in the nascent days of cinema.

In comparison to these minor attractions, Moon was an epic, running for just under 13 minutes and costing 10,000 francs to make. Filming took three months, because of the sheer scale of the production, which included multiple sets, costumes, and props, all shot in the studio Méliès himself built. Then there is the editing, which incorporated many of the tricks Méliès was known for, along with a crude form of animation and a very early use of dissolve transitions.

The story is very simple and doesn’t even need intertitles, which is just as well as there aren’t any. A group of scientists, led by Méliès, decide to build a rocket that will take them to the moon. The mission is a success and once on the lunar surface, they find many wonders to behold but also discover a form of life, in a tribe of insect people. The scientists are captured but they escape and return to earth to a jubilant reception.

Like I said, it’s barely 13 minutes long but it packs a lot into that time. The first thing one should notice is how most scenes are shot in a single take since cutaway editing wouldn’t be devised for another few years yet. Considering each scene has a large cast in shot and takes place on a big set with many moveable parts, and shot during the day to make use of daylight, the three-month filming run starts to make sense.

Since space travel was mere fantasy in 1902, there were no real reference points as to how the surface of the moon would look, what sort of vehicle would be needed and so on. All Méliès had to rely on was his own imagination and that of Jules Verne and H.G Wells, whose novels were an inspiration. Therefore, modern viewers might snigger at the sight of the rocket which resembles a large bullet, how it can comfortably fit six grown men inside it, and the fact it is launched out a giant cannon (complete with a fuse).

Despite landing right in the moon’s eye, the rocket lands in a forest like environment with large fungi and rocks surrounding them. Concepts like gravity and toxic atmosphere have yet to be discerned so you’ll have to forgive the lack of spacesuits and breathing apparatus. The insect people are acrobats in costumes, which is handy for when they bounce around to attack the scientists, only to be easily defeated with a punch that sees them explode into dust.

Luckily the feebleness of the insect people is what allows our heroes to fight their way to freedom, returning the rocket and make their way home, with Méliès on the outside of the rocket. Yes, I know, he’d be burned to a crisp upon re-entry but again this was the simpler times of 1902. Regardless of absent logic and scant credibility in its science, even modern audiences should marvel at the ambition, scale and the execution of this film for its time when most people were still learning how to load their cameras.

Méliès not only created sci-fi cinema with Moon, but also special effects, and one might even contest he created the basic language of film narrative. Each film saw Méliès take things a step further, with more daring edits, bigger sets, and impressive looking props, though everything was still rather sedentary as Méliès was a product of the stage, and the only thing he didn’t invent was moving camera.

Remarkably, Moon wouldn’t be the apex of Méliès’ creative powers or the increasingly elaborate productions, but it is the one in which he did it all first and threw down the gauntlet for all filmmakers to embrace the possibilities of cinema in brining the extremes of our imaginations to life. It is for that reason Moon remains Méliès’ most famous and seminal film.

Now, you might be wondering why you should pay Blu-ray money for a 13-minute film. Arrow Films are clearly mindful of the content vs. cost value ratio and have loaded this release with some sublime supplementary material. On disc extras include featurettes and fascinating documentaries looking at Méliès and his career, a dramatic re-enactment of his post film life, from Georges Franju, black and white and colour versions of Moon, and alternate musical scores.

Unquestionably, the crown jewel of the bonus features is the hardbound copy of Méliès’ autobiography, translated into English for the first time. Please note, this is a limited edition only offer, but if that doesn’t tempt you to get your wallets out, nothing will. Otherwise, this is quite a comprehensive document on the life and works of Méliès even without the book, thus worth the money for die-hard film buffs.

Very few films of this vintage remain intact let alone are important enough to warrant a independent attention outside of a retrospective compilation, and without hyperbole A Trip To The Moon is that one exception, and I defy anyone to challenge this. If you didn’t know Méliès before or why he is so significant to the growth of cinema as an art form, this release not only educates you but also will leave you wanting more.

The Innovations of Grand Méliès 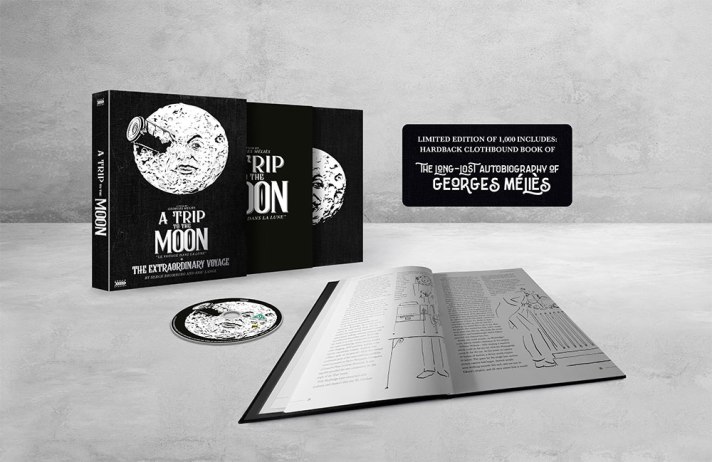 3 thoughts on “George Méliès’ A Trip To The Moon”