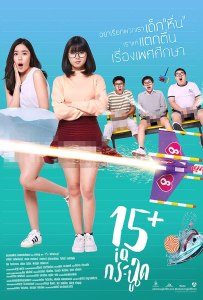 “Life doesn’t begin at a certain age. It begins whenever you realise it.”

A profound yet somewhat askew pearl of wisdom that has the misfortune of appearing in a film that sets the #MeToo movement back a couple of decades, or illustrates how Thai cinema might be a little behind the rest of the world.

15 year-old Chaladlert (Yongsin Wongpanitnon) is like most boys his age – curious about sex but doesn’t quite understand why. With his two friends O-Bue (Jirakit Wongsripheng) and O-Young (Thanset Suriyapornchaikul), they lewd the girls at their school from afar. One in particular, Cherry (Lita Janvararpa), is the object of desire for Chaladlert but an accidental case of miscommunication has drive a wedge between them.

Keen to win Cherry’s trust back, Chaladlert vows to enter and win the school’s science engineering competition to impress her, but that means defeating the best student in the whole school, Sudarat (Ploy Sornnarin). Because Sudarat and Chaladlert are neighbours, O-Young suggests Chaladlert cosy’s up to Sudarat and steal her plan for her competition entry, unaware that Sudarat in fact has a crush on Chaladlert.

Ribald teen sex comedies were a staple of US cinema in the early 80’s which morphed into the slacker comedy of the early millennium, until the recent scandals in Hollywood saw films objectifying women almost evaporate overnight. Unfortunately, it seems Asian cinema didn’t get the email and Thailand once again are late to the party if 15+ Coming Of Age is any indication.

What makes this more awkward is that this genre is apparently underrepresented in Thai cinema so its release was seen as doing something fresh. Even its teen stars have said in interviews it is “more funny and cute than dirty”, quite a divisive statement. In some ways, there is an element of truth to this as the core theme is teen relationships as well as proving sex education for 15 year olds, yet I imagine a lot of the smuttier material will mean they are precluded from seeing it by the Thai film ratings board.

It isn’t so much about the boys – and some girls – being obsessed with sex, it is the tired tropes – like Chaladlert’s aunt Balloon (Pinsuda Tanphairoh) being a sexy young filly – and objectification of women that is the problem. All females under 40 are naturally photogenic, the older ones scantily dressed, girls are judged by the breast sizes, and a line is crossed in a tawdry fantasy vision of Sudarat being aroused.

Coupled with two young female student teachers whose only purpose is to have their skirts ride up to show their underwear, and a panty shot scene involving Cherry which crosses another line, and I can’t see female audiences in the west caring much for this film. But I suppose it is okay because the boys are all spotty, glasses wearing geeks and over time, their hijinks backfire on them, resulting in humiliation of some kind.

This isn’t exclusive to the boys though –  a male student known only as Top is apparently so devastatingly handsome that he is consider a “public personality” thus no girl has a chance to date him, including Cherry, who is in love with him. Then there is Sudarat, the perfect student against who every other student is measured, with a giant poster on the school walls encouraging everyone to be like her.

Sudarat is a typically plain, bespectacled girl married to her books, but she too harbours secret desires to understand the pleasures of the libido. Having grown up with a single mother, she has lost faith in relationships until a noble gesture from Chaladlert when they were younger stirred something with her. Since then Sudarat has felt a vibe from him and wants to explore it further, resulting in a game changing study session.

Now we get to the sex education part of the film as proclaimed by its stars and with it a change in tone. Without spoiling anything, the inevitable happens and within the remit of inculcating to teen audiences, it is a necessary development, albeit one that arrives a bit late in the film. But the impression presented here is that the male is to assume full responsibility for this, when both are complicit, which seems hugely one sided.

However, a possible subtext to this is to explain to boys they can’t have it both ways – if they are man enough to do the deed they also need to be man enough to deal with the consequences. My inference is this was designed to shock male Thai teens into keeping in their pants until they are ready to deal with it. The drama goes a little further with a surprise twist regarding one person’s personality, before tying it all up with the main plot and an implied happy ending.

Earlier, I mentioned Hollywood teen sex comedies which directors Napat Jidwerapat & Artwanun Klinaiem clearly took their cues from, some of which are quite amusing, some sadly tacky in the modern climate. Had this been a US film, the cast would have been in their 20s, yet here they were the same age or barely older than their characters, making the prurient material harder to digest.

Yongsin Wongpanitnon was 15 when he played Chaladlert, lending natural authenticity to his gauche persona in a strong debut, whilst then 18 year-old Lita Janvararpa confesses Cherry’s kissing scene was her first ever kiss! Best of the bunch for this writer was Ploy Sornnarin as Sudarat, now aged 19 and a veteran compared to the others, someone who has a great career ahead of her if she gets the right roles and is allowed to grow.

15+ Coming Of Age has me conflicted – it is often amusing and belatedly well intended, but its overt bawdy content and sexualisation of 15-year olds jars badly against current social attitudes. Maybe you need to be 15 to enjoy it without condition or context.