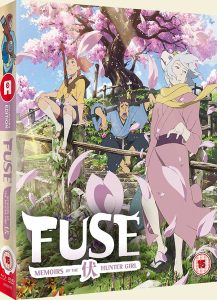 Dogs are a man’s best friend, so they say. Well, we have a pug and she prefers to hang around with my mum over me and my dad, so I guess that is one theory disproved. But I digress, as ours is a domesticated dog and the ones featured in this anime film are far from friendly…

In Edo period Japan, Hamaji Ooyama, a hunter girl living in the mountains, receives a letter from her brother Dousetsu living in Edo, asking her to pay him a visit. Because she can’t read, Hamaji gets lost trying to find Dousetsu’s house upon arriving in Edo, but when a fight breaks out between a masked man and two samurai, Hamaji is caught in the midst of it and assumed to be the man’s accomplice as he escapes.

By showing his gratitude, the man takes Hamaji to her brother’s house, where Dousetsu suggests he and Hamaji team up to hunt down the last two Fuse – half-human, half-dog killers terrorising Edo. The shogun Iesada Tokugawa puts a hefty bounty on the Fuse to anyone who can deliver their heads, and Dousetsu hopes catching one will finally help him become a samurai. However, neither are aware that Hamaji has just met one of the remaining Fuse.

Considering they eat dogs in Asia, it probably isn’t a surprise to see them portrayed as horrific beasts in their art and culture, though there is a twist to this in Masayuki Miyaji’s adaptation of Kazuki Sakuraba’s novel Fusé Gansaku: Satomi Hakkenden. This is partly due to Sakuraba’s novel playing fast and loose with the central concept of the classic epic Japanese novel Nansō Satomi Hakkenden by Kyokutei Bakin, about eight samurai brothers descended from dogs.

A two-season anime TV series riffing on this story, Hakkenden: Eight Dogs Of The East, might be more familiar to many fans but Memoirs Of The Hunter Girl goes one better with its meta narrative, courtesy of Meido, aspiring writer and fictional granddaughter to Kyokutei Bakin – yes, Bakin appears in a version of his own story! In fact, it is Meido reading aloud from her unfinished novel that bookends the film, explaining the title and why the voice over narration isn’t in the first person.

Miyaji opens the film with a grisly scene of Hamaji hunting and killing a show dog whilst explaining how her late grandfather taught her to make a connection with her prey. This “connection” can’t be empathy because Hamaji slays the poor creature despite the terror in its eyes, which leaks a tear as its life slips away. Not a good start for us dog lovers…

Nor is the first thing Hamaji sees upon arriving in Edo – six severed heads of the eight Fuse on public display, the blood still fresh on the most recent one. Hamaji balks at this gory attraction, in compete contrast to her killing an innocent dog just moments earlier, but the boasting samurai who made this kill is on hand to explain to Hamaji – and the audience – about the Fuse.

Pronounced “foo-say”, the titular beasts are presented as shape shifters, predominantly in human form, capable of transforming into werewolf like canine killers. They feast on human “essence” and their victims are chosen with discrimination, hence the shogun’s bounty being so high, fearing his status won’t protect him from an attack. Since they are indistinguishable from other humans, the main giveaway of the Fuse is a seven-petal peony mark on their body.

With just two left to hunt down, Hamaji and Dousetsu cover every corner of Edo with no luck, oblivious to the fact one is right under their nose. The silver haired masked man Hamaji became inadvertently caught up with, Shino, is one of the two remaining Fuse and – you guessed it – Hamaji felt a “connection” to him. Since he felt it too, Shino refuses to eat Hamaji’s essence, playing protector whenever she gets in trouble due to their association.

Somewhere in the middle of this, Hamaji finds herself agreeing to deliver a letter on behalf of the Fuse Doustesu kills, having now discovered the empathy she was missing at the start of the film. It feels like a sudden change but not a drastic one given how Hamaji reacted when she saw the severed Fuse heads, making her coldness at killing the snow dog less true to her character.

The story takes an interesting turn when Hamaji discovers Shino is in fact a celebrated kabuki actor – playing the female lead of course, because what is an anime without a bi-shonen male lead – and his trope puts on a play which explains the creation of the Fuse, as written by the Bakin featured as a character in this film. If things get any more meta, maybe it will turn out Bakin is writing a story about me writing this review about this film based on his works!

Really though, it is not so mind bending like a Satoshi Kon film, but the final act takes into a new direction with another hastily added twist leading to what is an all talk and no action climax. This is disappointing as prior to this some nifty actions scenes take place, with blood galore courtesy of the sword swinging denizens of Edo and the feral-clawed attacks of the Fuse.

Handling the production is TMS Entertainment, one of the oldest anime studios in Japan, who have taken Ghibli’s whimsy and suffused it with Hosoda’s loose character designs and artwork. The result is cartoony in places but not egregiously, whilst staying true to the period setting being depicted; however both Hamaji and Meido sport modern looking attire, the only real distraction from an otherwise credible historical aesthetic.

Fusé: Memoirs Of The Hunter Girl provides a unique modern twist to a classic Japanese tale, giving it a heart yet doesn’t skimp on the action. It could still have been a bit kinder to dogs though…

5 thoughts on “Fusé: Memoirs Of The Hunter Girl (Fuse: teppô musume no torimonochô)”