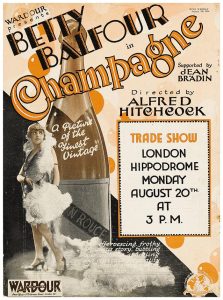 People who grew up with wealth are the worst. There, I said it. Now, I realise that might be deemed and egregious generalisation, but there are far too many examples of people whose sense of entitlement has come from not having to struggle or often actually work to afford even the basics in life.

A wealthy magnate in the champagne business (Gordon Harker) is aghast to read in the newspapers that his daughter (Betty Balfour) is to fly out in her father’s private plane to meet her boyfriend (Jean Bradin), who happens to be on a cruise ship heading to France. This elaborate rendezvous takes place as planned, but the happiness is short lived when the boyfriend’s seasickness leaves the girl open to be wooed by another male passenger (Theo von Alten).

Following an argument over the girl’s capricious attitude due to her wealth, the couple arrive in France separately, as does the girl’s father. He announces that his fortune has been lost due to a stock market wipe out leaving them penniless and unable to leave France. The girl suggests she sell her jewellery but she is robbed before she can, so the only option left is to get a job; however, this is all a ruse by her father to get his daughter to appreciate their wealth and not be so greedy.

Based on a story from Walter C. Mycroft, there is little about Champagne that screams “Hitchcock” to the discerning cineaste, and indeed there is a reason why it is considered one his lesser and easily overlooked works. He may have written the screenplay himself with Eliot Stannard, but don’t expect his trademark suspense to surface because there is no room for it in this lightweight comedy.

Hitch’s silent output is largely a curio to most film fans anyway; this was his penultimate film before the talkies (sort of – 1929’s Blackmail was shot as a silent and with sound), during what was a lean period in terms of success for the future Master of Suspense. He would later distance himself from this film, lamenting it “had no story tell”, which would be a rare occasion when Hitch and the critics would be in agreement about one of his films.

One can see the potential in the basic plot of trying to teach a spoiled girl the value of money and its scope for comedy, but for whatever reason, the script fails to capitalise on any of this. Even though it is clearly a comedy, the one thing Hitchcock was often good at with his humour was subtlety yet there is nothing subtle about how he illustrates this levity to the audience.

The opening scene is the father losing his rag reading (and ripping up) the daily news papers for telling him what his wasteful and defiant daughter is spending his money on, complete with exaggerated facials, and trite attempts at hilarity as he takes his ire out on his fawning staff. Looking at this through modern eyes, the big question is how did the press know about the girl’s plans before her father did, and how exactly is this front-page news?

Maybe she is a proto-Kardashian in making headlines for no reason other than existing but I digress. It would appear her man feels diminished in their relationship as the girl makes all the decisions because she can since daddy’s wealth is footing the bill. This is the cause of their arguments but every time they try to make up, it is her haughtiness that ruins it.

Now down and out, the girl struggles to make do with the pittance they have left, living in a tiny flat and forced to cook for herself with predictably dire results. Of course, her father sneaks out and dines in luxury, whilst his daughter ends up employed as a flower girl in a “high class” restaurant. Again, the humour is derived from her lack of common sense in being on the other side of the patron-staff divide but salvation comes in the unlikely form of the man who was chasing her on the ship.

In reality, this could have been a chance to inject some danger into the plot and make the man a crazed stalker and have him mould the girl to his whims since he has money and she doesn’t. The boyfriend could come to the rescue, and/or the father could be held to ransom, revealing the ruse and creating a Stockholm syndrome scenario for the girl to get her father back for his deceit.

Unfortunately, this isn’t what we get. At best, this is Hitchcock dabbling in the screwball comedy genre and not making a good fist of it. There is also truth in how it had no story to tell, as even at 85-minutes long many scenes are padded out with protracted shots of the surroundings, like the bustle at the busy restaurant, for what seems like an eternity when the story could have been progressed.

Whilst Hitchcock the writer was having an off day, Hitchcock the director was steadily trying new things behind the camera. Many of his little touches from prior films, such as double exposure shots and the use of close ups to denote bad intentions, resurface here with a few fresh ideas. One, which is used twice, is the POV from behind the champagne glass as it is being drunk; on both occasions it has a different purpose but visually it is a cleverly disorientating yet enigmatic image to behold.

Perhaps Champagne was the reason why Hitchcock didn’t attempt another comedy for a long time after this, which might be justified since there is very little of him in the DNA of this film. It’s not a terrible film, just an unremarkable one and more importantly, a missed opportunity given the main plot which maintains its resonance in today’s world of financial inequality.

Even the greats can have an off day, and this is Hitch’s.