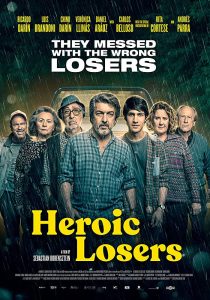 “What do you do when you realise that it’s not only one, but a whole army of arseholes that ruined your life?”

This might be an emotionally driven rhetorical question from the distraught protagonist of this Argentinean comedy heist film but the subject of his revenge is just one person, though he didn’t act alone in his crime. But this is still about the little person standing up to the greed of the powerful and corrupt.

2001 and retired football star Fermín Perlassi (Ricardo Darín), along with his wife Lidia (Verónica Llinás) and old friend Antonio (Luis Brandoni), decides to help the economy of his hometown of Villa Alsina by reopening La Metodica, an agricultural cooperative that shut down a decade earlier. To cover the basic investment costs they rally some of the locals to form a consortium, managing to raise half of the money needed, which Fermin puts in a safety deposit box at his local bank’s vault.

A few days later, the manager Alvarado (Luciano Cazaux) persuades Fermin to move the money into his own account so Central Bank will approve the loan much quicker. However, 24 hours later the President announces a freeze on all bank accounts with a strict withdrawal limit, but worst still, Alvarado was in cahoots with corrupt lawyer Fortunato Manzi (Andrés Parra), allowing him to steal all the money in the bank prior to the freeze. Having lost everything, Fermin and co, plot their revenge.

If you’ve seen the Ocean’s Eleven films you might make comparisons between them and Heroic Losers but I haven’t so I can’t. If anything, it is made clear during the film that it owes a more obvious debt to How to Steal a Million, from which Fermin watches and borrows his masterplan. And the 2001 financial lockdown of Argentine did indeed happen though I hope somebody nicking all the money didn’t.

Based on the novel La noche de la Usina (The Night of the Heroic Losers) by Eduardo Sacheri, who also wrote the screenplay, this could essentially be seen as a working class take on the above mentioned films, pitting ordinary country yokels against the financial clout of the pernicious social elite. Their access to hi-tech equipment to aid them in their quest to reclaim their money is severely limited but that doesn’t mean their plans are lacking in audacity.

Despite his once great moment in scoring a goal that changed the fortunes of his team, and a shabby statue in his honour, there is no celeb vibe about Fermin and only minor reverence among those of his generation. This allows him to pass about town with some anonymity like the rest of the folk, placing him among the hard working citizens now he runs a small petrol station. Plus his wife Lidia is not a supermodel type, and the one with the hardnosed gumption, allowing Fermin to keep his feet firmly on the ground.

No surprises that the folk Fermin recruits to invest in his project are typically dirt under the nails types not known for the business acumen, aside from shipping company owner Carmén Lorgio (Rita Cortese). Among this motley crew of generous souls are dopey self-employed Gomez brothers Eladio (Alejandro Gigena) and José (Guillermo Jacubowicz), mechanic Rolo Belaúnde (Daniel Aráoz) and unemployed yokel Medina (Carlos Belloso).

Little do they know the disaster that awaits after agreeing to support this charitable endeavour but Fermin is about to lose much more than money when after a fruitless confrontation with the slimy Alvarado, whom Fermin considered an old friend, a car crash leaves Fermin badly injured whilst Lidia died. This brings their son Rodrigo (Chino Darín – son of Ricardo) back home from studying and keen to join in with the revenge plan.

Manzi, it seemed, underestimated the cunning and community spirit of the townsfolk, since he chose to hide the stolen millions away in what he thought was a remote location but was in fact right under the noses of his victims. They learn through the grapevine that Manzi had an underground vault built in the back of some fields which was protect by a hi-tech security alarm, so the devise a plan to break into the vault and have some fun at Manzi’s expense.

Perhaps what makes this film work so well despite its moments of silliness is the grass roots way they bring down the pernicious villain with simple-minded guile and elbow grease. No complex computer hacking programmes are devised, or daring escape plans, it is all down to timing, teamwork, and an understanding of their surroundings. The most hi-tech equipment used are early mobile phones and a remote control car.

This does mean Manzi is the flimsiest of bad guys with nothing to define him besides his evil pantomime beard and arrogance, but it works in making Fermin and friends easy to root for, though the sheer principle of their grievance is enough. Also underdeveloped, or avoided depending on your point of view, is the obligatory teased romance between Rodrigo and Manzi’s hot young secretary Florencia (Ailín Zaninovich) which nearly derails the heist.

Remarkably, it doesn’t matter than no new ground is broken with the script or the plot for that matter, since the fun is in the tireless efforts of the group in thwart their enemy, not to mention it is never certain if they’ll actually pull it off thanks to a final act with some neat little twists. Sebastián Borensztein directs the climax like it was a suspenseful thriller following 100 minutes plus of gentle humour and predictable drama, played out by the committed cast, led by the ever-reliable Ricardo Darin.

I actually missed a mid-credit coda first time round which adds literal acidic flavour to the denouement in reviving the cheeky humour, and beautifully underplayed to boot. In conclusion, Heroic Losers ticks all the boxes beholden to the genre yet is accomplished enough to be perfectly enjoyable and entertaining in spite of this.