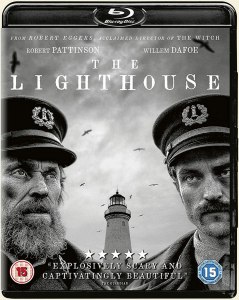 Loneliness can be a real killer, which is why “lighthouse keeper” is hardly at the top of any list of career choices, though these days they are probably computer operated. Back in the days of yore however, a human presence was a necessity and even then, it wasn’t a top job prospect for many. I wonder why?

On a remote New England island during the 1890’s, Ephraim Winslow (Robert Pattinson) arrives to work as a wickie at the lighthouse, under the aegis of cantankerous old-timer Thomas Wake (Willem Dafoe). The assignment is only for four weeks and Winslow is pushed hard by Wake, doubling his duties and plying on the pressure for not meeting his unfairly high standards.

Biding his time, Winslow finds a small figurine of a mermaid which he pockets, and soon after begins to have strange visions of a real one (Valeriia Karamän) being washed up on the shore. Meanwhile, Wake is acting weird too, sneaking off during the night to the lantern room naked, forbidding Winslow from going in there. When a storm prevents Winslow from leaving, tensions between the two men reach breaking point but it may not be their doing…

After impressing with his debut The Witch, Robert Eggers unites with his brother Max for this throwback follow-up The Lighthouse. I say throwback – shot in black and white and in 1.19:1 picture ratio, it shares the aesthetic of Bait in replicating cinema of old, but is far more modern in presentation and execution of its darker, artier moments. This includes one particular image I doubt anyone expected to see on the big screen.

Just like his debut, Eggers presents a slow building horror story, but centred on just two men and their internal demons spiralling out of control. Using the old legend of the sea being a bringer of misery, we experience their raw, existential dread and hallucinatory supernatural overtones climaxing in a febrile orgasm of delirium and a haunting closing shot that will be remembered for a long while.

Then again, calling this a horror might be slightly erroneous if this is to appeal to fans of gore and jump scares – gothic horror would seem more accurate given the origin of the story is supposedly based on the last unfinished work of Edgar Allan Poe. Yet the horror is mostly visceral and largely psychological, the majority in their minds anyway, or so we are led to believe, thus the conceit of the plot.

Having left a job in timber in Canada, Winslow took this post hearing the pay was good enough for saving to settling down, but Wake’s petty picking might scupper that. When asked about his predecessor, Winslow is told he went mad and died shortly after, but he has his doubts based on Wake’s own behaviour and strict restrictions to parts of the lighthouse.

Nothing too creepy so far, except for the one eyed seagull that pesters Winslow outside the lighthouse. Wake warns Winslow never to harm a sea bird but the avian antagonist pushes its luck and pays the price. Coincidence that things start to get really tense and peculiar around the lighthouse? Winslow’s dreams of mermaids and all things tentacle related get wilder, Wake becomes even more irascible, and then the storm hits.

In the second half of the film, the mood oscillates between these two drunkenly bonding and revealing their secrets one moment then going for each other’s throats the next. Neither can afford to make an enemy of the other but whether a clash of personalities or some kind of malevolent force interfering, paranoia and distrust is the pervasive feeling hereon in, and we know it isn’t going end with a handshake and the raising of glasses.

Creating a plausible chemistry is paramount when you have two conflicting yet oddly similar characters coming together. The grizzled, salty old sea dog used to his own ways opening his doors to a taciturn younger hired hand is always a combustible situation, but there are times when it feels like we’re watching an eerie lost episode of Steptoe & Son, with Wake’s unapologetic flatulence and the generation-clash bickering that occurs.

Recalling the visual confusion of Bergman’s Persona and the unflinching provocation of Lars von Trier’s Anti-Christ, Eggars serves up a tasteless buffet of grotesque imagery in rapid cut tandem with the quotidian to create a disorienting nightmare vision we live through as much the characters do. But it is not just there to shock, it all has meaning in reflecting the damaged psyches of the two men, accentuated by the evocative black and white photography.

Willem Dafoe was robbed of an Oscar nomination for his turn as Wake. He captures that aged, unyielding, ex-sea farer with insightful precision, his “pirate” tinged accent lending credence to the sublime period dialogue coming from something of tropey figure. I have to confess I’ve not seen a Robert Pattinson film before this. During the first half, I wasn’t convinced by his delivery though I understood Winslow insularity was the cause; once the mood switches he suddenly comes alive and actually showed me something, so kudos to him.

Depending on your point of view, The Lighthouse is arguably a less accessible film than The Witch which wasn’t quite mainstream to begin with despite the marquee cast, but does show Eggars is not one for resting on his laurels. Proving the genre can be rooted in reality even when dealing with mythical creatures, this is another promising slice of modern arthouse horror, and Eggars is one of its leading voices.

2 thoughts on “The Lighthouse”