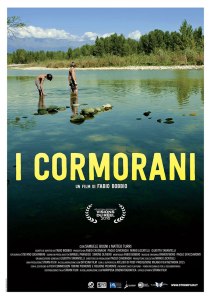 Childhood summers, spent with friends hanging out, living life without a care. It sounds idyllic and for many might be the stuff of fiction like an Enid Blyton story rather than real life, but real life doesn’t always make for fun and engrossing cinema either.

Two friends in rural Italy on the cusp of becoming teenagers, Matteo (Matteo Turri) and Samuele (Samuele Bogni), spend their days together during the summer break. They are either by the river, at the shopping centre, or the local funfair, doing no real harm but still getting up to juvenile hijinks to bide their time.

And that is the entire plot of The Cormorants. If you search IMDb, you’ll find a synopsis far more detailed than the one above, promising a coming-of- age tale of two friends embarking on a life-changing journey of self-discovery. Maybe that was the intent of Fabio Bobbio, a documentary maker presenting his first fictional work, but this doesn’t come through with enough clarity to suggest that is what we are indeed watching.

Yet, something about this unaffected, bucolic outing that is oddly captivating yet is not exactly riveting either. By avoiding contrivance and conventional narrative, there is no drama thus the implied rites of passage discovery isn’t manifest as tangible for the viewer. The upside is no predictable crisis point where the central relationship is jeopardised, leading to a crowd-pleasing reunion for the finale, but there needs to something more substantial in its place.

Other people inhabit the world as Matteo and Samuele but are largely incidental and not even given names. They include a prostitute (Valentina Padovan) they watch from the bushes as she conducts her business in a roadside lay by, and a gang of boys apparently stalking them for reasons unknown. For the bulk of the film, it is just as if only Matt and Sam exist.

Nothing of significance is shared about either boy, making their story one the audience is left to construct themselves. Both wear the same clothes every day, implying they might be homeless, or just staying away from home. They have money for food and fun, and Sam has a phone which is charged and with credit, hinting they have somewhere to go after all.

Since conversation is at a premium, it is hard to get a reading on their personalities and maturity; their demonstrable resourcefulness and self-sufficiency shows them at least worldly and happy at home with Mother Nature. Swimming in the river, making camps out of branches and leaves, and fishing, they’d make good boy scouts if nothing else, yet they are equally enamoured by video games and fun fair rides.

Really, their existence borders on being an endless cycle of all of the above with the only discoveries being padlocked underground pathways, paint cans with residual content, and the titular cormorants flying over the river. They seem content with each other’s company with implicit hints it might be something more if they would ever let it, but are not so insular they can’t flirt with girls at the fun fair.

With their ages purported to be twelve years old, sex is something Matt and Sam have a typically juvenile grasp of, per their chat about kissing girls being a major notch on their manhood scorecard, but are quick to write off the prostitute as a slut. Later, Sam dares Matt to ask her how much she charges for their amusement more than anything, eventually leading to what is for this writer, the most telling scene of the film.

For the first time the boys are inside a house, sat on a settee with Sam dozing off and Matt giggling like an idiot at something. The camera eventually turns round to reveal the prostitute performing a striptease for them. Sam sits up once the woman’s top is off and she remains committed to her act despite her underage audience laughing throughout, not showing the slightest sign of excitement or titillation.

The reason I found this such a gravid scene is because it could be read two ways – the boys were either laughing because the prostitute had played into their cynical hands, showing a total lack of self-respect by doing a turn for two kids, or they were laughing because they were in over their heads and this was their nervous reaction to their first personal experience of adult sexuality.

Conversely, this is symbolic of my own frustration for not being able to read the rest of the film in the same way. For 86 minutes, Matt and Sam go through a daily routine that is either mundane or eventful, yet not everything lends itself to the upheaval of adolescence it is supposed to chart. Therefore, I don’t know if I’m being thick again for not picking up on everything or if Bobbio is too smart.

Bobbio’s documentary past emphatically shines through in the lack of defined plot, loose structure, and near voyeuristic presentation captured by Stefano Giovannini’s stunning cinematography. Every frame exudes beauty regardless of the surroundings, the verdant greens of the forest carrying a pure nostalgic evocation of summer for some, just as the vibrant, neon lit excitement of the fun fair will for others.

If the two leads weren’t already friends before this they are great actors, such is the natural rapport and lack of artifice in their interactions together. With an untrained cast and hardly any set-ups that feel scripted – the prostitute scene aside – this may as well be a documentary, but would be duller if it was, due to the unhurried pace and quotidian repetition.

Recommending The Cormorants is wholly dependent on how dense and ambiguous you like your arthouse cinema. If visual poetry and vérité ethos is your thing, go for it, but if you need more of hook than gorgeous imagery, the oblique narrative may prove too challenging to embrace. A mildly refreshing snack but not as nourishing as I hoped it would be.