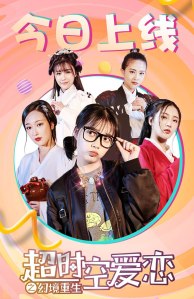 Many of us spend our lives trying to meet the expectations of others but rarely do we succeed if we don’t know where the fault lies. Clearly, we need help identifying these weaknesses but whom do we turn to? Maybe we don’t need to find someone, maybe it was in us all along…

In ancient times, four different women – warrior Liu Rusi, winebibber Chen Zilian, geisha Li Mengying, and prodigal daughter Susu – each receive a specially coloured apple which they believe is a gift from God. Instead, their souls are transferred into the apples and become ornaments on a magical necklace, which is then found in modern times by plain downtrodden singleton Qin Duyi (You Menghan).

The four women appear before Duyi explaining how she has been chosen to help them with a mission that will return them to their previous lives. All she has to do is get four conceited men who wouldn’t otherwise look at her to say “I love you”. To guide Duyi, each woman will take over her body as their individual personalities will attract the men as Duyi is lacking these qualities.

Before I go any further, I have to apologise for the lack of information regarding this film which I found on Amazon Prime and only watched because it was short, seemed light, and of course, has a gorgeous cast. Sadly, even with some of the names available, not Google can help put them to the faces, other than You Menghan (and even that was by fluke), so I’m afraid this will be a rather lacking review on that front.

Perhaps I shouldn’t be too surprised that Timeless Romance is so under the radar, since it appears to a low budget flick with big ambitions that it half meets and half does the best it can within these modest parameters. I don’t know if it got a theatrical release in its native China or it was straight to VOD (hence it being on Prime), it certainly has that feel to it in places, yet in others it punches way above its weight.

For instance, the opening sequence introduces us to the four ancient beauties in their normal realms, beginning with Liu Rusi valiantly taking on a group of men alone with just a sword in a forest. We then meet Chen Zilian who seems to be a professional wine drinker if such a thing existed in Ancient China, before joining Li Mengying in the middle of a seductive dance. Finally girl kid Susu is shown showering the peasants in the street with money because she is nice and talented.

Every one of these scenes looks credible enough, from the costumes to the architecture and the period setting, betraying any idea this wasn’t a cheap and nasty as it sounds. If anything, it is the modern day set content which is more likely to give this away, but even then, there are enough smoke and mirrors to help these shortcomings seem less of an issue.

Qin Duyi works at the offices for a construction company, which are admittedly sparse in appearance but not embarrassingly so, where everyone is professional and dressed as such except for her. She is often late, dresses casually, and with her large glasses (with no lenses – curse the budget!) there is little ambiguity that Duyi is posited as the ugly duckling soon to become a swan (except she is as cute as a button).

Taking one day each, Duyi is controlled by these differing personalities, which nobody seems to think is weird, but it does make her more attractive to them. Liu brings out Duyi’s toughness and physicality, Susu makes her very proactive and helpful, Chen helps her out drink anyone (apparently an admirable quality in Asia), and Mengying turns Duyi into a sultry seductress with a taste for tea.

Making things a little confusing, sometimes the women themselves are shown with the men to represent Duyi under their influence, but then we will see Duyi dressed in their attire instead as another method of illustration. It is also inferred the men can see the other women like the audience can, except they also make a point to suggest otherwise. Having Duyi wearing their clothes is also distracting since we know she is not actually dressed that way, as they revert to her own fashion in the same scene.

Since Duyi is only meant to be guided by their personalities, it seems odd director Tian Tian didn’t trust the audience enough to be led by Duyi acting out these different traits to follow the plot. A little later on this does happen as two of the women take over Duyi in front of their men, having her flip between personalities, but it would have surely been funnier to show Duyi acting tough like Liu or sensuous like Mengying throughout.

It’s not as if You Menghan isn’t capable of pulling it off as her adaptability carries the whole film, essentially playing five roles in one. All the women have a strong presence despite looking quite similar – at first I thought they were all the same actress hence the choosing of Duyi – making the most of their flimsily sketched characters.

One thing noticeably absent is the romance the title implies. Nothing happens that can be described as romantic, making the basis of the male interest in Duyi shallow and solipsistic. To balance this out, a nerdy food stall owner likes the “real” Duyi but she doesn’t notice until a predictable last act twist gives us a happy ending.

Whilst Timeless Romance has a fun premise with huge potential, Tian Tian wasn’t able to exploit much of it. Whether it was down to the budget or lack of experience, Tian stumbles early and goes in the wrong direction to recover. Watch it for the pulchritude if you must and appreciate the earnest effort, then hope for a bigger budget and better scripted remake.