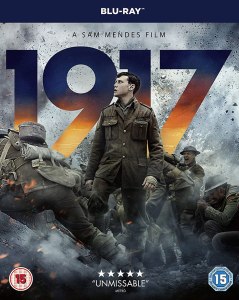 War films have largely been either political or patriotic, but always keen to exploit the mental or physical suffering of those on the front line. The depiction of the battles is not just to wow the audience but also to give us a front row seat in witnessing what for most of us are just fables. Sam Mendes now takes us a step closer to letting us feel like we are actually in the trenches.

April 6th 1917 and Lance Corporals William Schofield (George MacKay) and Thomas Blake (Dean-Charles Chapman) have been selected for an important, time sensitive mission by General Erinmore (Colin Firth). Intelligence has discovered the German army retreat to the Hindenburg Line is a ruse to ambush the attacking British soldiers, but with all lines of communication down, there is no other way to get the message to Colonel Mackenzie (Benedict Cumberbatch) to cancel the order to attack than on foot.

Schofield and Blake carefully make their way across No Man’s Land, through abandoned German trenches and other treacherous terrains to make it to the front line in Écoust. With Blake killed by a German pilot grounded after a dogfight, Schofield must continue the journey alone, with time rapidly running out and dangers becoming increasingly insurmountable.

Mendes based 1917 on the stories told to him by his grandfather Alfred Hubert Mendes, a messenger during World War I, co-writing the screenplay with Krysty Wilson-Cairns. At the risk of sounding flippant it is a rare case of the plea “Don’t shoot the messenger” not just being wilfully ignored but also encouraged, though the true motive is to honour the unsung heroes who gave as much for their countries as any other ranked soldier did.

It is a tale of courage, fortitude, resilience, and heroism as much as it is about simply surviving against the odds in the most hostile of environments imaginable. Schofield is at first presented as the less confident one of the duo, following Blake’s lead more than forging a joint path together; then again, Blake’s brother Joseph (Richard Madden) is a Lieutenant in the squad at Écoust, so he has a personal interest in this mission.

However, it does seem a little callous to send Blake knowing he could die before being reunited with his brother, but presumably the thinking was this reward would spur Blake on to make an extra effort to ensure the mission. Take your pick on how you view this. Schofield was only picked because he was with Blake when he got the order – except he is in fact a veteran of the Somme and received a medal (which he exchanged for wine from a Frenchman), so his passive demeanour is a bit of a façade.

Blake’s early departure comes after Schofield is shown to be the clumsy one, cutting his hand on barbed wire, and setting off a trip wire bomb in the abandoned trenches that should have killed him. We are supposed to wonder how this milquetoast soldier can survive after this but contrivance is on hand, as Schofield lucks his way into the path of another battalion, led by Captain Smith (Mark Strong), to give him a lift.

Until their truck reaches a wrecked bridge and Schofield is back on foot again as time is of the essence. Alone again, Schofield has to rely on his own mettle to survive against attacking German soldiers and avoiding drowning in a tumultuous river in full angry flow. There is some respite as he meets a young French woman (Claire Duburcq – the only female in the film) hiding underground with a baby she found, but this is fleeting as dawn is approaching.

Admittedly, it is hard to make a film about war that not only tells a fresh story but also implements action and battle sequences to keep the energy levels up and appease the blockbuster audience. Mendes ensures there is never a dull moment across these two hours, something the last two James Bond film Skyfall and Spectre allowed him to draw influence from, in terms of how much peril one man can endure.

Yet we know Mendes had an ace up his sleeve to play in making his film stand out, and that was the employing the “single shot” method – i.e. to convince us what we were seeing was filmed in consecutive real time single take. Of course, it clearly wasn’t as there is a blackout at 66-minutes to mark the passing of time from day to night; this is not me being churlish though, Mendes had intended this to be a two-act film.

Plus, if you know what to look for, you can see where an edit has been made, nor was it ever a secret that whilst they did do long takes they were never more than 10 minutes at a time. But you know what? Who cares? Lee Smith’s editing is exceptional in doing exactly what was required of him to make it look like it was a continuous shot, and I’m sure most people wouldn’t have noticed anyway, so mission accomplished. That Smith didn’t get an Oscar for his work is a travesty.

Veteran Roger Deakins also deserves the highest praise for his impeccable camerawork, following the actors every step of the way, staying close or keeping his distance when required and never missing a beat. To compose these shots and capture them in one go in real time is quite an achievement and the fact it is so flawlessly done is a testament to the talent and skill of the crew, and indeed the cast for hitting their cues and acting their socks off every time.

1917 will live and die solely as a technical achievement for many but it also has a story with heart, emotion, and raw drama to add substance and purpose to its unquestionable visual marvel, which, as an immersive experience that leaves you breathless, this is the new standard to meet.

The Weight Of The World: Sam Mendes