Every Day’s A Holiday 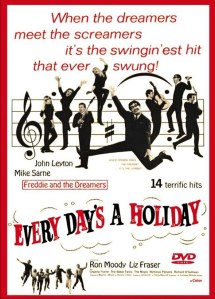 Every Day’s A Holiday

The rock’n’roll movie was probably an inevitability after Bill Haley and Elvis took off and Hollywood decided to capitalise on their fame. It wasn’t long before British rockers got the same treatment with Tommy Steele and Cliff Richard. But by the 60s, it seems anyone with a chart hit was put on the big screen as this shoddy little outing attests.

I’m afraid that really is the sum of the plot, aside from Gerry and Timothy being rivals for Christina’s affections, whilst her stuffy aunt (Hazel Hughes), who forbade Christina from working at the resort, turns up to take her home. And this was credited to THREE writers!

Every Day’s A Holiday came in the wake of Cliff’s mega hits and in the same year as The Beatles’ A Hard Day’s Night but displays no signs of providing any kind of threat to their evergreen legacies in the rock’n’roll movie oeuvre. For its US release it was renamed Seaside Swingers, a decidedly saucier but even less representative title for what it had to offer, more so as I doubt most of the “name” acts ever made in across the pond.

John Leyton started out as a soap actor before having a few hits produced by Joe Meek, notably the classic number one Johnny Remember Me; Mike Sarne also had a number one with Come Outside, a comedy record with the late Wendy Richard before becoming an actor and director. I have no idea who The Baker Twins or Grazina Frame were, the latter apparently provided the singing voices for the female leads in two of Cliff’s films.

Perhaps it is some irony that the only act in this film with any real lasting name value is Freddie & The Dreamers, who never had a UK number one but did actually hit the top spot in the US with I’m Telling You Now two year after its UK release. Their presence is mostly as the chefs at the resort, performing a staged musical number under that guise, then doing a song as themselves during the talent show.

Whether this was enough to entice British and American fans to flock to the cinema I can’t say but in the case of the latter, I wonder what they would make of our holiday resorts? The film was shot at a Butlins in Clacton and the patrons, as you might have guessed, were your average working class families, packed into communal food halls for their meals, and finding entertainment at the bingo.

Occasionally the cast will burst into song, usually John Leyton who gets four numbers, one accompanied by a full on themed dance routine, no doubt designed to emulate those in Cliff’s films but comes off as second class on every level. The Baker Twins, assigned as children’s nurses, warble an ode to boys called Romeo Jones, whilst bathing a couple of toddlers, yet is less embarrassing as Leyton’s number.

The humour is naturally very broad and of its time – i.e. dated and hasn’t aged well. The first gag of the film sees Mr. Close’s secretary Miss Slightly (Liz Fraser) reading a book on the psychology of sex, which she admits she is “very much into”, because the Carry On films didn’t have the monopoly on innuendo. Slightly more successful is self-absorbed posh boy Timothy woefully miscast as the camp’s children’s entertainer Uncle Timmy, his verbose interactions with the perplexed kiddies proving mildly amusing.

Because of the period it came from, other aspects of this film won’t be warmly accepted by modern audiences.  In an early scene, Gerry sings to the mirror imaging himself as Frank Sinatra and Nat King Cole, and if you are wondering if he black faced to portray Cole, sadly he did, ironically singing a take on the Cole classic Unforgettable called Unforgiveable…

Something that was always amazing about British cinema during the 50s to the 70s was how many top names would appear these low budget films, maybe just to keep working or maybe they needed the money. Liz Fraser will be a well-known face though one might argue that Ron Moody, playing Christina’s Italian music teacher Professor Bastinado, was the bigger name.

His role is as the comic foil for Christina’s aunt, having helped cover for Christina so she can work at the resort and now has to keep her aunt from finding her niece. But, it turns out there is more the professor than meets the eye, as revealed in the third act. At least Moody’s character had a purpose, I’m still struggling to see why Richard O’Sullivan was here, unless it was because of his appearing in Cliff’s films. His character is either gay or simply likes fashion and… that’s it really.

Unquestionably the star of the film is the late great Nicholas Parsons, who passed away recently. He plays the pretentious TV producer Goddard, a hurricane of frayed nerves and deluded aspirations of creating high art. He goes overboard in the role to make it work, and as a result is arguably the most entertaining character here. And digressing slightly, the DOP for this film was one Nicolas Roeg.

Every Day’s A Holiday isn’t a total wash out but isn’t close to what it was aiming to be. A fair way to describe it is “The Beatles on a budget” (not referring to the appearance from Scouse band The Mojos either). Ironically for a musical, the songs are best skipped to get the most from this anaemic but curious 60s cash in.