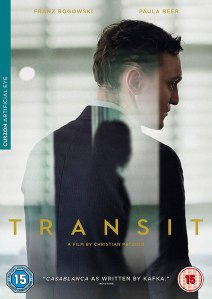 Survival in extreme circumstances may often require the odd white lie – or even a major one – to be told, but is there a line which shouldn’t be crossed in distorting the truth, especially if it means unwittingly involving others in this grand deception?

In an alternate present-day Paris under Nazi occupation, German political refugee Georg (Franz Rogowski) seeks to leave the capital but first is tasked with delivering a letter to noted writer Franz Weidel at a nearby hotel. When Georg gets there, he discovers Weidel has committed suicide, and takes his final manuscript and identity papers promising safe refuge in Mexico.

Georg escapes to Marseille with a friend, Heinz, who dies during the journey, leaving a deaf widow Melissa (Maryam Zaree) and young son Driss (Lilien Batman). When Georg visits the Mexican consul to hand in Weidel’s papers, they mistakenly assume Georg is Weidel and give him Weidel’s transit visas to Mexico. Using Weidel’s identity, Georg comes unstuck when he meets and falls in love with Weidel’s widow Marie (Paula Beer).

To clarify, the modern day Nazi occupation of France does not make Transit a dystopian drama, rather Christian Petzold chose not to use the original setting of the 1944 novel by German author Anna Seghers, based on her own wartime experiences. A staunch anti-Fascist, Seghers defected from Germany to France until the Nazi’s occupied Paris forced her to seek refuge in Mexico.

Although, this is a 21st century without mod cons like TVs, mobile phones, computers, etc, with only vehicles and a transistor radio coming the close to representing modernity, otherwise the general aesthetic tactfully carries a 1942-esque veneer to reflect Seghers’ original vision. It also allows for the central conceit of the story to work without incurring accusations of glaring plot holes and incredulity.

Georg is a shady character in that the audience can’t get a proper reading on him or his motives. The film opens pretty much in media res offering no build up or introduction to Georg or the situation, with not much more forthcoming as things progress. Such details being held back are necessary in keeping up parts of the mystery in the later stages but work against getting the audience invested in the characters.

Complicating matters, or simply adding to the ambiguity of the developments depending on one’s point of view, the narrator of the novel appears in voice over form but isn’t made clear if this is Georg or an impartial observer providing the commentary. At first it feels like Georg is recalling events from memory, a pretence kept up for most of the film until the drama with Marie begins, then things subtly appear to change perspective.

Initially, the events taking Georg from Paris to Marseille are par for the course in a war time setting – sneaking about to avoid capture, stumbling upon an unfortunate suicide, inheriting someone else’s personal effects, a daring escape from the enemy – so nothing seems too out of the ordinary there. Having Heinz’s family also be illegal immigrants is a topical touch, yet keeps the “underground operation” aspect of the day-to-day survival in an occupied country a salient plot point.

However, the Mexican consul mistaking Georg for Weidel just doesn’t ring true at all, since there was zero effort on Georg’s part to create such a deceit, but unless I missed something, nothing in the conversation even leads to such a suggestion, so where the consul got the idea from is horribly executed, therefore implausible in this circumstance. But Petzold soldiers on with it and so must we.

Marie is the pivot that turns the story into something different. We know her name from one of Weidel’s letters in Georg’s possession, but her identity isn’t revealed to much later under unusual circumstances. Before this, Georg is beguiled by a woman who seems to pop up wherever he goes, running in and out of cafes, public offices, even approaching him in the street in a case of mistaken identity, her appearance desperate and haunted, her silence eerie and sudden disappearance ethereal.

Without giving too much away, Georg and Marie’s meeting leads to a love triangle which refuses to follow the traditional paths, in part due to their identities being unknown to each other, the rest a result of the need to escape France for freer climes. Unfortunately the pace still doesn’t pick up even though the final act is twist upon twist with nobody not knowing what they really want, making sacrifices without knowing why they are making them

And the change in the narrator’s perspective and use of tense accompanying the visuals is a prelude to our understanding of what we are watching, throwing doubt over its veracity and our powers of observation. I’ll say no more except the answer has been under our noses all the time but Petzold doesn’t feel it necessary to confirm or deny any conclusions we arrive at.

Petzold is known for a slow burn approach to his films and whilst Transit is no exception, the pacing is rather erratic, starting with a huge crash landing that drops us directly in the middle of the chaos of an occupied country. It then settles down once Georg reaches Marseille before giving way to a jauntier second half where enigma is the pervasive direction in subverting our expectations without betraying the source material.

Franz Rogowski is the film’s anchor as Georg, as an unconventional looking leading man making his relaying of the various internal and moral struggles palpable in someone who can’t believe it is happening to him either. Paula Beer as Marie also possesses versatile looks that blur the lines between reality and fiction, modernity and the past.

Despite being a Petzold film in tone and spirit, for me Transit feels a little flat in that it doesn’t build to a crescendo and leave you staggered, meandering for most of its duration, never fully committing to all of its many curious ideas.