2019 was the year of the Isekai anime. For reasons that continue to baffle, every season featured at least three to four new titles in which somebody from modern day Japan was transported to another world. This might have been through magic where someone was summoned, the now-passé trapped in a virtual video game route, or in at least one case, reincarnation.

Quite how these series – and indeed the source manga/light novels – got green lit when it is obvious this is a subgenre which is already oversaturated with similar titles tends to highlight the paucity of fresh ideas and the laziness of the anime industry in cultivating new concepts. Then again this isn’t new – not that long ago it was all mecha shows, then the magical girl phase, and more recently the high school harem, so this is another fad we’ll just have weather until a new one comes along.

This proliferation of identical titles meant I gave most of them a wide berth although not all were so generic and derivative. Two in particular proved fun: Hataage! Kemono Michi in which a pro-wrestler is transported to another world during a match to defeat demon beasts, but instead decides to open a pet shop; and Honzuki no Gekokujou (Ascendance of A Bookworm), the story of a reclusive girl with a love of books who is killed then reincarnated in the body of a sickly child where there are no books, so she vows to make her own.

A few classics were given a modern make-over like Fruits Basket, Blade Of The Immortal and Dororo, whilst many hot properties continued to roll on, such as Attack On Titan, My Hero Academia, Black Clover, Psycho Pass, and of course the unstoppable One Piece. But, like above, this reliance on hardy perennials and sequels doesn’t bode well for the next big breakout hit, which is out there somewhere.

Unfortunately, one the major stories of the year regarding anime was the fire at the Kyoto Animation studios which took the lives of 36 workers and injured a further 33. A result of a deliberate arson attack, this shocked the industry and the fandom but everyone rallied round and true to the Japanese spirit, KyoAni was back to business in no time, which is good news for everyone.

So, without further ado, here are my personal Top Ten shows which aired on Japanese TV in 2019 and as usual agree or disagree as is your wont.

10. Dumbbell Nan Kilo Moteru? (How Heavy Are The Dumbbells You Lift?) 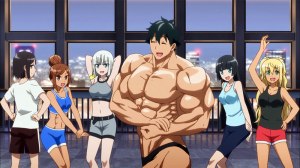 Quite a few anime shows have an educational foundation to them, though this tends to be restricted to science, food, and cultural mores. This one focuses on exercise, working out, and looking after our bodies. Schoolgirl Hibiki Sakura feels she is putting on weight because she eats too much so her friend Ayaka encourages her to join a gym. Under the tutelage of the uber muscular Naruzo Machio, they learn all the right exercises and the benefits of keeping fit. Funny, silly, fan servicey, but very educational. 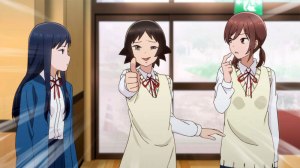 Can I say something amazing right now? Nobody does off the wall, irreverent slice-of-life comedy like the Japanese do and this is one of two shows on the list that exemplify this. The above opening line is a running gag courtesy of Nozomu “Baka” Tanaka, one the central cadre of this madcap series of unexpected happenings and surreal adjuncts in which the simplest things become a complicated matter for no discernible reason. Witty, barking mad, self-aware, and relentlessly funny. 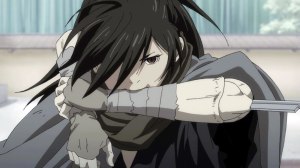 The creation of the legendary Osamu Tezuka, the first anime adaptation of Dororo was made in 1969; 50 years later it returns with updated visuals, streamlined storytelling and a few new twists to introduced the characters to a whole new audience. A bloody fantasy epic, Dororo is in fact a cheeky young petty thief who encounters Hyakkimaru, a cursed swordsman looking to reclaim his body parts after his father sacrificed them in a pact with demons for power. Available on Amazon Prime if you missed it.

7. Doukyonin wa Hiza, Tokidoki, Atama no Ue (My Roommate Is A Cat)

As a dog owner, I should have avoided this show but it was too cute to pass up, proving to be one of the more endearing titles of the year. Subaru Mikazuki is an introverted who ends up adopting a stray cat named Haru, and the living arrangement is a huge learning curve for both man and moggy. The twist is we see the story from both perspectives, revealing how Haru sees Sabaru and why she reacts the way he does to a situation, and how Sabaru gets it so wrong. Great fun. 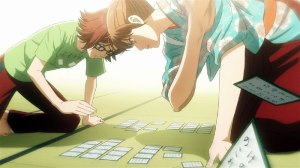 Returning after an agonising absence of six years, the third instalment of this comedy drama involving the card game of Karuta may still be running but has lost none of its sparkle and ability to draw us into the nail-biting contests. Despite the huge gap in adaptations, the story continues where it left off in season two, introducing new faces to the game whilst upping the personal stakes for the established cast members Chihaya, Arata, and Taichi.

Granted the story is old hat – a niche school club is in danger of being shut down if the last surviving member can’t get more people to join, which he does then sees the group test their talents in national competition. What makes this show different is the central hobby – the Koto, a traditional Japanese stringed instrument. The drama is typical, the comedy is broad, and the tropes too familiar but it possesses an intangible magic that makes it compelling viewing, maybe the music of the Koto itself.

The other anarchic comedy of the countdown, the conceit behind this show is the entire case are animals you’d find in Africa! It revolves around the central trio of a lion, a lizard and a toucan, the latter a slimy, lazy, disingenuous, and self-absorbed jerk and possibly the greatest new character of the year. The office politics are the same as any other, the only difference is the instigators would find the jungle a less threatening environment. Surreal, subversive, superb! 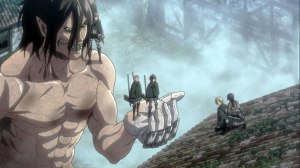 With the first part of the third season taking a detour to explore a different aspect of this ongoing war between humans and titans, part two sees a return to the stuff that got this mega show noticed in the first place. There are still secrets to be revealed about the creation of the Titans, and twists to unfold as a result, but this is more action focused than part one, with plenty of devastating battles to behold and new levels of violence reached. And we’re STILL not done! 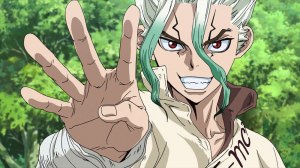 Education time again in this implausible but scientifically sound show with the message that the impossible can seem possible, all you need is a little know how. When a strange event occurs, which petrifies everything in its wake it seems like the end has arrived. But 3700 years later, precocious science boffin Senku Ishigami awakens and frees a few others before deciding to rebuild the world from scratch using his scientific knowledge. It’s life Jim but not as we know it…yet!

When I was a child and I was naughty, my parents used to frighten me into being good by threatening to send me to a children’s home. Having seen this show, I am SO relieved I chose to behave. Set in an alternate 2045, this is the story of a group of orphans who learn their loving upbringing at a remote orphanage is not quite as perfect as it seems, when two of the older children, Emma and Norman, discover why they were forbidden from leaving the grounds.

Despite lurching into realms of absurdity and suspension of disbelief, mostly due to the resourcefulness of the kids, The Promised Neverland ranks one of the most visceral and disturbing anime to arrive in some time. Not because of the minor supernatural horror and the extremes of the battle of wills between the kids and their guardian Isabella, but because plays on the paranoia of kids who have already lost everything in life and stand to lose a lot more. Season two can’t come quick enough.

A mixed bag of titles that was hard to settle on as a few other shows had the potential for inclusion too, like the aforementioned isekai shows, as well as the violent historical adventure Vinland Saga, musical drama Given, coming of age drama Araburu Kisetsu no Otome-domo yo. and slice-of-life comedy Hitori Bocchi no Marumaru Seikatsu.

Like with most years a few gems appear among the rough and no doubt there are some others I missed for a number of reasons that I might encounter down the line if they get a future UK release, so, take this as a snapshot of what 2019 had to offer.

Join me again at the end of 2020 to see what new treats were served up in the home of anime, and which ones made the grade in MIB’s Top Ten.

Thanks for reading and until next time, this is the Man in Black saying Sayonara!