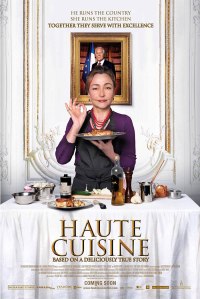 Politics is a messy game for politicians and the general public who suffer at the hands of the bickering and dirty tricks of the various parties. Yet, it seems the true backbiting and malfeasance occurs not in the chambers of political office in the backrooms, for example, the kitchens of the French President.

In the early 1990’s, news reporter Mary (Arly Jover) is covering the work of a scientific expedition in the Antarctic when she notices the buzz surrounding the arrival of a woman to the base camp. In asking who the woman is, Mary learns it is the camp cook Hortense Laborie (Catherine Frot), not just popular due to her culinary skills but because she was previously the personal chef to the President of France.

Hortense is based on a real person, Danièle Mazet-Delpeuch, the first ever female personal chef to President François Mitterrand from 1988-1990. This is a brisk dramatised account of those two years creating dishes and meals to suit the palette of the most powerful man in the country and the many dignitaries who were his guests during his record 14 years in office.

Director Christian Vincent has only allowed himself 90 minutes to tell this story, leaving much of the formalities and details concerning Hortense’s appointment to be lacking any real insight into how one lands such a job. A succinct depiction shows Hortense escorted from her home in Périgord to the Élysée Palace, where she is offered the job of running the private kitchens, based on her reputation as a bastion of classic French cuisine.

Since it would no doubt be rude to refuse, Hortense accepts the job which comes with a set of strict rules to be adhered to, such as having the daily lunch menu ready early to be approved by the President personally, whilst observing his likes and dislikes, and to enter the building through a staff entrance away from main chambers.

This last rule is broken a few days in when the doorman isn’t present to open up, forcing Hortense to sneak in through the main building. This marks her first meeting with the President (Jean d’Ormesson), who she discovers is a kindly older man with a romantic view of food, enjoying a Proustian trip down memory lane via certain meals. This gives Hortense a confidence boost to strive to create the perfect meals for him.

But it is not all hot pots and harmony behind the scenes as Hortense and her assistant Nicolas (Arthur Dupont) face opposition from disgruntled main kitchen chef Pascal Le Piq (Brice Fournier). Clearly put out by being usurped by an outsider, and a woman at that, Le Piq refuses to cooperate with requests for items from Hortense, though she doesn’t let it stop her from doing her job.

It is as petty as it sounds but this was the 80’s France, not that this is any excuse but the male ego was far more fragile back then. It is quite likely Le Piq (or his real life counterpart if he did exist) resented the immediate connection Hortense had with the President given his years of service, maybe seeing it as a slight against his own cooking. Whilst the President’s day job is seldom featured it is this friction that provides the drama – as such as it is.

When Hortense is tasked with providing a truly special lunch she goes all out to honour the President’s request with an ambitious spread including an esoteric cream cheese dish for the main, which Le Piq decides is a dessert which is his department. Le Piq demands it is removed from the pre-approved menu, creating an internal incident by going over Hortense’s head to get it changed.

Since this is the height of excitement and tension, it make the film comes across as lacking in ambition beyond the food aspect. Unlike horror films which shouldn’t be watched on a full stomach, Haute Cuisine shouldn’t watched on an empty stomach! Hortense and Nicolas conjure up many mouth-watering delights with military precision to make anyone salivate.

Yet, these scenes are sadly too infrequent to inspire the audience to dig out their own recipe books, and fewer tersely delivered instructions are passed on. If the purpose is to illustrate the charm of quaint vintage recipes and the exacting preparation methods of Hortense/Mazet-Delpeuch then aim accomplished. They may be serving posh nosh and making it with care, but the homely approach is key to the magic.

Hortense’s time at Élysée Palace is shown via flashback, intertwined with the present day setting at the Antarctic base, where it is her last day as chef. Running the kitchen just as she did for the President, Hortense still takes pride in her work and whilst the diners may be less refined than international heads of state, they are still fed with quality cuisine.

Names and dates have been changed but the basic framework of this story is rooted in fact. Mazet-Delpeuch’s tale carries plenty of fascination, and is clearly worthy of deeper exploration. Keeping it fictional means nothing official (read: contentious) is revealed, a shame depending on if one is looking for a juicy tell-all yarn and not a breezy tribute to a woman who made history in the kitchen.

Catherine Frot may not resemble Mazet-Delpeuch but is able to portray her as a strong woman with pride in her work and character. Frot effortlessly exudes poise and class as Hortense, whether she is on duty for the President or “slumming it” in a tiny canteen for a team of scruffy scientists. As the prominent female in the film, it is quite remarkable her gender is barely an issue, avoiding bogging the story down a feminist narrative.

One can see Haute Cuisine has a lot more to offer than this competent taster of Mazet-Delpeuch’s intriguing experiences, possibly limited by official protocol, though there is enough here to stave off that movie hunger, leaving enough room for afters.