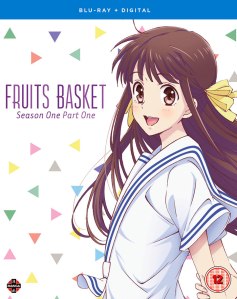 In this age of film and TV reboots, we shouldn’t be surprised to see many classic or fan favourite anime titles be given a modern overhaul. With anime though, the reason for as reboot is not so much a lack of new ideas but because of the original show was victim to the perennial problem of out-running its source material.

When the original TV adaption of Fruits Basket aired in 2001, the manga by Natsuki Takaya was still running, eventually ending in 2006. The anime therefore deviated from its source in order to conclude within its allotted 26-episode run, leaving many die-hard fans unfulfilled and dissatisfied by the bespoke, newly scripted ending.

Now time has passed, it is time for the slate to be wiped clean and bring Fruits Basket back for a new generation to enjoy and to give older fans what they have waited years for. With TMS/8PAN, one of the oldest anime companies, taking over from Studio DEEN this 2019 reboot promises to be more faithful to Takaya’s original work and will tell the complete story from start to finish, as illustrated by this release coming from Season One.

The story, hasn’t changed one iota – orphaned schoolgirl Tohru Honda finds herself living with members of the Soma family, victims of a curse in which they have been possessed by spirits of the animals of Chinese Zodiac and coming into contact by female humans will trigger the transformation. You can read the full details of the plot in my review of the original adaptation HERE (one of the first anime titles reviewed on this site).

It’s an unusual but surprisingly fertile premise for what is superficially appears a reverse harem comedy which ultimately reveals itself as a tale of kinship and emotional bonds between abandoned souls in a society where judgement is rife. Whether it’s within the family units of the Soma or the Hondas, or external influences like school and work, this is a group of people who learn that it is okay to be yourself and end up all the better for it.

Since the story remains unchanged, at least for the first part of its run, the question will be whether the visual update is enough to warrant committing oneself to this saga once again. There is no denying the improved artwork and animation is a great hook and in this age of HD TV is far superior to the original, but sometimes this clinical makeover brings with it a lack of warmth in the overall feel of the production.

Fear not, because this is not the case with Fruits Basket 2019. If anything, one will find the experience much more immersive and emotive and far from being a soulless affair, which we can attribute to the characters actually moving more fluidly and being more expressive compared to the original where things were static and minimal. As mentioned in my first review, the visuals were dated even by 2001’s standards so an overhaul was completely necessary to compete with modern day titles.

Whilst some might want to argue the tightening up of the facial features is a betrayal of the manga’s character designs – for example, Tohru no longer has enormous eyes that dominate her tiny face, and the male leads are more chiselled but still effete within the bi-shonen template – it is not like Tohru, Kyo, or Yuki are suddenly unrecognisable from, nor have the personalities been recalibrated to reflect modern cultural affectations.

One area here this has been subtly addressed however, is in how the Soma clan tend to take advantage of Tohru’s willingness to cook for them in exchange for accommodation. In the original this was made an explicit condition of the arrangement at the start but not mentioned here, as this wouldn’t jive well with many I am sure. Instead, there is a dependency to rely on Tohru for the cooking but others pitch in with housework too.

Rather noticeable is the absence of an overarching storyline pitting Tohru and the Soma boys against a defined antagonist to overcome. The episodes are sequential and some plot points might span successive chapters, otherwise the driving force behind the plot is the day-to-day existence of this eclectic bunch. It is a testament to the strength of the cast that despite some repetition – Yuki and Kyo always fighting, new family members showing up, etc. – it never feels dull.

This is very much a comedy show first, and isn’t afraid to get a bit silly with some of its comic asides, embracing the frivolity of chibi figures, sweatdrops, and surreal non-sequiturs since much of this joviality is broad at best. To expect subtly in a show where people turn into animals upon human contact is pure folly which is why it is easier to simply run with it and enjoy the moment.

Yet, this does nothing to undermine the moments where things get serious and darker, another example of where the updated presentation improves the visual storytelling. Had the original character designs remained, they would clash drastically with the sumptuous artwork of the backgrounds, buildings, and other set pieces, all rendered with meticulous care and attention to detail.

Following in the footsteps of Fullmetal Alchemist – Brotherhood, Hellsing Ultimate and other current updates of classics like Dororo and Blade Of The Immortal, the benefits of giving Fruits Basket a new lease of life should become apparent fairly quickly, regardless of how attached or devoted you may be to the prior adaptation. Beyond the superior visuals, there is an energy and vibrancy to this version that makes it feel fresher whilst the small twists in some of the details are vital to appealing to modern audiences.

Even at the halfway stage of this Fruits Basket reboot, I can’t imagine any hardcore fan of the saga being disappointed with this release and should celebrating getting to see the story told as it deserves to be.

Fruits Basket Inside The Episode:

A stand for the figurines