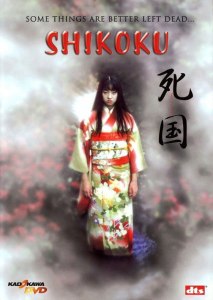 The problem with success is that whilst it brings recognition and fortune it can also result in unintentional notoriety. For example, the 1998 Japanese horror Ringu kick-started the J-Horror boom, but within this boom came the many imitators, lifting wholesale from Ringu’s quiet atmospheric style and vengeful long haired female spirit.

One of the quickest off the bat was Shikoku, which ironically played in cinemas as part of a double bill with Ringu 2. The story revolves around the titular rural Japanese island where a young girl, Hinako Myoujin lives with her two friends Fumiya Akizawa and Sayori Hiura, the daughter of the local shrine priestess. This trio are split up when Hinako’s parents move to Tokyo and lose contact shortly after.

Hinako (Yui Natsukawa) returns to Shikoku many years later to sell the old family home and to reconnect with her old friends, but learned Sayori (Chiaki Kuriyama) had drowned when she was 16. She finds Fumiya (Michitaka Tsutsui) still grieving for Sayori as her death is shrouded in mystery, whilst there are a spate of desecrations of shrines that are part of the 88 temple pilgrimage, which Sayori’s mother Teruko (Toshie Negishi) has just undertaken.

Just to clarify, nobody is actively blaming Ringu for the fact numerous filmmakers were inspired to make their own horror film in its wake; it has to carry the burden of being the launching pad for some many inferior copycats. Despite sharing a few glancing story and aesthetic similarities Shikoku can be put into this category, though it falls on its own inherent flaws rather than being a Ringu rip-off.

Shikoku is based on the novel by Masako Bando, its title something of a pun if you know Japanese, specifically how it is written. Shikoku is in fact the name of the fourth of the four main islands of Japan, its name translating to Four (shi) Kingdoms (koku), but shi is also the Japanese word for “death” (which is why four is also “yon”, and “shichi” – seven – is “nana”), so by changing the first kanji, Shikoku can also mean “land of the dead”.

And if that wasn’t deep enough for you, the island is noted for its 88 Buddhist temples and every year followers of the Shinto religion make the 1400 km round trip pilgrimage to visit every one of these mountain set shrines. Bando works this into her story to fulfil the supernatural remit, adding a folklore practice about sealing evil away by following the route in a clockwise direction – go the other way and you’ll revive the dead!

With Japanese and Asian folklore rich with such wonderfully esoteric yet plausible tales, it is easy to see why artists regularly mine them to form the foundations for horror films and the like. It is also a testament to said artists that they can pull it off with such aplomb, as they remain a vital part of their culture and heritage – well, most of the time anyway.

Despite the obvious potential of the story, director Shunichi Nagasaki and writers Kunimi Manda and Takenori Sento are unable to create anything remotely riveting with it, let alone scary. In trying to replicate the psychological dread of Ringu and blend it with the errant whimsy of traditional folklore, the only thing they achieve is making a film that doesn’t really know what it wants to be.

It opens with a young girl conducting some form of physical séance performance for the grieving parents of a dead boy, though it isn’t until alter we realise the girl is a young Sayori. Through a hastily edited and haphazard exposition dump, we meet the junior trio going about their typical kiddie business, with Sayori declaring her intention to leave the island for a better life, again, the reason still ambiguous to us.

There is a touch of irony – or perhaps prescient cruelty – that Sayori’s drowning is in an abstract way foretold when Hinako falls into the river and Sayori saves her. When Hinako moves away, tears are shed but Sayori doesn’t seem too sad. Upon her return to the island, Hinako learns from Fumiya that Sayori was jealous Hinako got to leave first, burned all her letters, and cursed her daily.

Fumiya and Sayori became a couple, and after her death, Fumiya continued to mourn, carrying a photo of Sayori, believing she is watching over him. Yet, as soon as Hinako arrives, Fumiya decides he can now move on and makes a move on her, which she reciprocates. If Sayori is watching over them, she isn’t going to be pleased with them, but as she is dead, this isn’t going to be an issue.

As exciting as this sounds the execution is the exact opposite – this is an exceedingly dull film that doesn’t even reach first gear. This is directly in relation to the aforementioned attempt to emulate Ringu’s eerie atmosphere, failing through flat visuals, unnecessarily jaunty hand held camerawork and two leads lacking in any charisma or personality. The film is also too quiet, with too much dialogue whispered and buried so low in the mix it might as well be a silent film. Yay for subtitles!

Whilst some horrors work best with a low budget, this one suffers because of it, evident in the cheap looking sets. There is one scene where everything is bathed in a powerful blue light which works very well but it sadly stands alone. And let’s not even start on the acting. Sayori was supposed to be the dead one but even as a resurrected corpse she shows more signs of life than her co-stars, a pair of inert blank slates with no agency or urgency.

Shikoku could have worked in the right hands. The ambition is there (somewhere) but is derailed by the harsh practicalities inherent with being a rushed, frugal production, which would also have served better forging its own identity instead of ripping off other films.