The Adventures Of Barry McKenzie 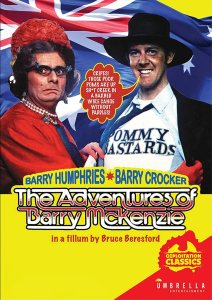 The Adventures Of Barry McKenzie

Strewth! If you Pommies thought Aussie cinema was all Crocodile Dundee then you’re all a bunch of raw prawns! Fair shake of the pineapple, they’ve been putting out fair dinkum films for a while, but nobody saw them – until a true Aussie statesman and his aunt crossed the pacific to pay us a visit in the 1970’s and share the benefit of their wisdom with us.

Barry McKenzie (Barry Crocker) is bequeathed $2000 ASD by his father but only on the proviso he travels to the UK and expand his cultural horizons. As luck would have it, Barry’s aunt Edna Everage (Barry Humphries) wants to visit the UK to catch up with her old friend Madge Allsop and joins Barry on what turns out to be a very eventful trip.

Hopefully most of you will know or have heard of Dame Edna Everage, though I suspect few of you will be familiar with her nephew Barrington Bradman Bing McKenzie. Both are creations of legendary Australian comedian Barry Humphries, but whilst Humphries portrayed Dame Edna, who he created in 1955, Barry McKenzie was a comic strip character created for Private Eye magazine in 1964 at the suggestion of Peter Cook after seeing another Humphries creation, Buster Thompson.

The concept of Barry McKenzie was him being a sex obsessed (but inexperienced), boozing, boisterous Aussie male navigating his way through Swinging London, and his fortnightly antics in Private Eye proved very popular. However, the strip cease by the end of the decade due to Humphries alcoholism caused him to miss print deadlines, though subsequently released compilation books also sold well.

With that in mind, The Adventures Of Barry McKenzie is very much a product of its time, illustrated in the use of derogatory terms now considered offensive and other vestiges of unsubtle vernacular long since outlawed by political correctness. But the character and this film were designed to be a stinging satire on stereotypes on both sides of the cultural fence and that certainly comes through one has to be aware of the reference points first otherwise it will seem like an onslaught of offensiveness.

Setting its stall out from the onset with “No poofters” scrawled across the bottom of the certification screen, the brash, caustic nature of the verbiage rarely stops for the next 108 minutes. But it is important to reiterate that this isn’t about being deliberately offensive or antagonistic – Barry is meant to be a rough around the edges – or if you like, ignorant – Aussie bum who doesn’t know any different and it is this refreshing frankness that excites conservative London.

As there is no discernible plot to speak of, we follow Barry and Edna on their series of misadventures across London, with the odd visit outside the city, in which the lanky lout not only finds fellow Aussies wherever he goes, ensuring he is well stocked on the amber nectar that is Fosters lager, but enchants the British folk around him. Wondering from one situation to the next, Barry’s rough charm sees him inexplicably land on his feet every time.

Britain was in the midst of a love affair with Australia at this point, explaining why the “Pommie Sheilas” are happy to be wooed by him, musicians want to steal his music, and ad execs want his rugged Aussie charm to sell their products. Yet, the many other Aussie ex-pats in England are somehow overlooked, instead treated like a nuisance and forced to live in slum like conditions in Earls Court, which they’ve turned into a graffiti haven.

Having Barry as a totem Aussie male runs the risk of reinforcing negative stereotypes but his roots in a satirical magazine born to prick the bubble of the establishment means this portrayal is firmly tongue-in-cheek. This applies to some of the British characters too, like the posh but perverted Gorts (Dennis Price and Avice Landone) who think Barry is loaded and hope to palm their gormless daughter Sarah (Jenny Tomasin) onto him and claim his wealth.

Other cameos include Spike Milligan as the landlord of the dingiest guesthouse, Peter Cook as a TV producer, Joan Bakewell as herself interviewing Barry in an embarrassing TV moment for the ages, and Julie Covington as a hippy singer. One of her fellow band mates is Barry Humphries in another of his three roles in this film, looking to exploit Barry for his own gain, a regular theme of the film.

If the regular use of certain verboten terms is the downside of the script for many, the redemption is in Barry’s lexicon of imaginative euphemisms, especially for using the toilet. I defy any man to watch this film and not start excusing themselves saying they wish to “point Percy at the porcelain”, “shake hands with the wife’s best friend”, “siphon the python”, “drain the dragon” or any of the wonderful phrases in this extensive canon of witty wordplay.

The script was co-written by Barry Humphries, who also wrote all the songs – even the puerile ones – and director Bruce Beresford, who only did it to get funding from the Australian government. Whilst is was a box office hit, the first domestic film to surpass $1 million ASD, it was critically mauled and instead of Beresford getting more work, his career temporarily nosedive, leading him to declare this film and its sequel “a mistake”.

Credit has to go to Barry Crocker, a popular crooner in Oz, for assuming such a ribald and outrageous role but he attacks with such pure unadulterated gusto that it is hard to tell if he is acting or not. Trivia note – Crocker sung the original version of the TV soap Neighbours theme tune! Stone the crows!

Unfortunately, the run time means the joke isn’t sustainable, and whilst beset with “of its time” inappropriate material, there are still many genuine laughs in The Adventures Of Barry McKenzie along with many creative and colourful additions to our euphemism dictionaries, cobber!