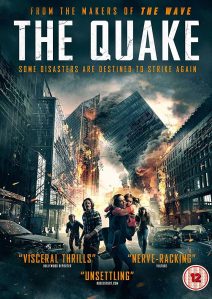 Natural disasters – God’s way of telling us we’ve messed up the planet with architectural, technology advancements, indulgences, and start again. Or for filmmakers, the perfect opportunity to destroy famous landmarks, properties and locations in the name of entertainment.

It has been three years since the devastating rockslide in Geiranger, Norway, which saw geologist Kristian Eikfjord (Kristoffer Joner) emerge as a hero for saving hundreds of lives. Since then, Kristian has been obsessed with finding those declared missing after the rockslide, causing his marriage to Idun (Ane Dahl Torp) to collapse, with her moving to Oslo with their two children Sondre (Jonas Hoff Oftebro) and Julia (Edith Haagenrud-Sande).

When Kristian’s former colleague dies while inspecting a tunnel in Oslo, he journeys over to the city to find out what happened. With the help of Marit (Kathrine Thorborg Johansen), his colleague’s daughter, Kristian discovers he was in the tunnel investigating unusual seismic activity, which Kristian believes is a pre-cursor to a possible earthquake measuring 8.5 on the Richter scale. Then the first tremors appear.

You may be wondering why the first paragraph of the plot summary says “the” rockslide and not “a” rockslide. This is because The Quake is a sequel to 2015’s The Wave, and expects you to be aware of this when watching. The most we get by way of a connection is the opening scene in which Kristian nervously appears on a TV chat show shortly after the first disaster.

Of course, the many reviews for this film and the DVD artwork will alert viewers of the fact The Quake comes from the same people behind The Wave and this usually means we can expect more of the same. Despite a different director in John Andreas Anderson taking over the helm, more of the same is exactly what we get, and mileage will vary as to whether this is a good or bad thing.

Those in the latter category will likely feel this way through this sequel following the general slow burn structure of its predecessor to the letter, right down to the first sign of trouble not occurring until very late in the movie and the last act being dedicated to the fallout. To clarify, the first minor tremors hit around the 48 minute mark but the real damage is done 20 minutes later, lasting roughly two and half minutes.

Prior to this, it’s a maudlin affair of Kristian moping around having let himself go as he work alone in the remains of the hotel from the first film, trying to piece together any information that will help him find the missing people from the rockslide. This obsession is enough to put a damper on daughter Julia’s stay with him, summarily sending her back home after one night from worrying she will distract him from his work.

Having abrogated his father of the year responsibilities, Kristian conveniently researches earthquakes in Norway – which has the highest earthquake activity outside of the Alps, according to the end credits coda – and notices irregular seismic movements in Oslo which he attaches to the cause of this friend’s death. However, nobody wants to listen to Kristian, dismissing his theory as paranoia after the previous incident, since the above fact about earthquakes apparently hasn’t been shared with the cast of this film.

You can figure out the rest which is asking a lot of the audience by offering such a paint by numbers plot. The worst crime is how the death in the tunnel starts to turn into a conspiracy theory when it is admitted the tunnel is notorious for its poor safety record and susceptibility to naturally occurring phenomena, which then goes nowhere. Then there is the rather swift change of heart from Marit, thinking Kristian is weird to trusting him blindly in the space of two scenes.

Even a minor tremor in the city centre is waved off as the result of a boisterous concert at the opera house (who was performing this opera, Metallica?) but Kristian knows better and decides to get his family out of Oslo ASAP, before the big one hits. Naturally, he isn’t successful a Sondre is in a college lecture ignoring his calls and Idun is at work in a skyscraper restaurant.

Feel free to tick off the clichés as they appear if you wish but credit where it is due, Anderson does know how to execute a decent nail-biting thrill ride, off-setting the predictable moments (where we know who will survive) with a couple of shockers. The visuals are top notch, and whilst the actual earthquake is brief, it is the aftershocks that do the real damage and they occur when they feel like it.

The sight of two buildings opposite the one Kristian and co are in slowly collapses onto each other is reminiscent of two Kaiju clashing in a fight, with a battered Marit watching one as she know the debris is going to hit her building. Meanwhile Kristian and Idun are trapped in a lift shaft experiencing some terrifying incidents of their own as the building start to implode in spectacular and rather artistic fashion.

Bound by genre convention, Anderson and his SFX team aren’t so adventurous in creating some fresh moments of life threatening terror to make us hold our breath, but those that do appear work exceptionally well, one with Julia is high tension exemplified. That said, even the textbook set pieces aren’t to sniffed at, providing sufficient burst of nervous energy, a competent mixture of CGI and practical effects combined with dangerous stunt work.

As sequels go, The Quake suffers from replicating its predecessor too closely and hoping lightning would strike twice instead of applying its best elements to something fresher and narratively progressive; in other words it’s more Jaws 2 than Superman 2. However, if you crave a disaster flick quick fix, this a slow building but efficient enough panacea, though The Wave was the stronger film in this writer’s humble opinion.