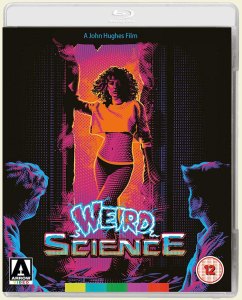 Go on, admit it – if you had the chance to build your perfect man or woman, you would leap at the opportunity, right? Of course you would, just like the sex mad teenage boys in this fantasy comedy from unofficial teen spokesman of the 80’s, John Hughes.

Perennial pariahs Gary (Anthony Michael Hall) and Wyatt (Ilan Mitchell-Smith) are the butt of jokes and humiliation at the hands of school bullies Max (Robert Rusler) and Ian (Robert Downey Jr). Spending the weekend at Wyatt’s house while his parents are away the lovelorn losers watch the 1931 film Frankenstein on TV, giving Gary the idea to use Wyatt’s computer to create their own fantasy woman.

Feeding it with information and pictures, they hack into a government network to give the PC a boost, causing an electrical storm which sends a power surge through the doll they hooked up, bringing it to life in the form of Lisa (Kelly Le Brock). The lives of Gary and Wyatt are about to change as their perfect woman introduces them to a world of parties, teen romance, and important life lessons.

After delivering the astute character study of teenage identity in The Breakfast Club, John Hughes reverts to bawdy nature of his directorial debut Sixteen Candles for Weird Science. This outlandish fantasy comedy of ultimate male wish fulfilment couldn’t be made today, at least in the same ribald vein of thirty-four years ago, though its core message is considerably more innocent and noble than the content surrounding it.

Hughes might be guilty of playing up to the lustful desire of the male gaze in objectifying women for the sake of facilitating the building of self confidence in two social outcasts, but you can count on him to add that little subversive twist to turn this back on those here purely for the libidinous antics. Granted, such fan service is delivered in spades but look beneath it and there are some prescient elements found in the story.

Lisa being made from a home computer is naturally as far-fetched as Boris Johnson not being a complete disaster as Prime Minister, but some things involved in the process are in fact a precursor to the current age of the internet and 3D printing. Even with the technological leaps of the 80’s, computers were fairly basic yet the set up Wyatt has here remarkably resembles something you’d see today.

The landline phone connection to the government computer system that turns Wyatt’s PC into a supercomputer capable of far more than a game of Pacman, is a proto-internet years before anyone knew what it was. But this is a fantasy and the order of the day was to run with it for a laugh, which is far easier than to be po-faced about the implausibility of this scenario.

More surprisingly is how Lisa is not just a living sex doll for the boys – they did load the computer with copious amounts of information after all, so she wouldn’t be a bimbo. Yes, she is pin-up worthy and can party like it’s 1999 every day, but she has a strong moral compass, confidence, moxie and the wit to make any pig headed man back down before her. Just ask Wyatt’s older brother Chet (Bill Paxton), a grade A bully who suffers Lisa’s ultimate wrath in one of cinema’s more apposite acts of comeuppance.

Of course, Gary and Wyatt think they have hit the jackpot with Lisa, revelling in having her by their side while the likes of Ian and Max look on with jealousy, despite already with girlfriends Deb (Suzanne Snyder) and Hilly (Judie Aronson), whom it is established at the start of the film, Gary and Wyatt are keen on too. You can guess how that plays out but the ride is wild enough to forgive the adherence to this particular convention,

Hughes makes some valid statements on the fickleness of social status through Gary and Wyatt sudden popularity after Lisa arranges the mother of all parties at Wyatt’s house, though of course it is less about them, more the fun to be had in their name. Amusingly they spend most of the party in the bathroom whilst the rowdy revellers turn the house upside down, until Lisa has an idea for them to prove their worth in a unique manner.

Relying on a familiar face from his previous films, Hughes gives Anthony Michael Hall the run of the field and he doesn’t disappoint, effortlessly bouncing off pliable Ilan Mitchell-Smith and abrasively obnoxious Bill Paxton, whilst stealing the show from poster girl Kelly Le Brock. Her English accent gives Lisa that touch of elegance she’d not have were she an All American sexpot, making scenes like at the lingerie store even funnier.

As someone who watched Weird Science when it came out in 1985, I can’t imagine how it would be viewed today – the idea of creating a perfect woman to fulfil a fantasy would be rejected, yet we live in an age where sex robots are almost a thing. Looking at it again after all these years, some of it is a bit cringe worthy (the fashion!) but at least my favourite scenes are still funny!

It is a shame a film designed purely to be silly fun will likely be polarising in a modern environment, making the target audience primarily those of a certain vintage looking for some cheeky nostalgia from their youth.