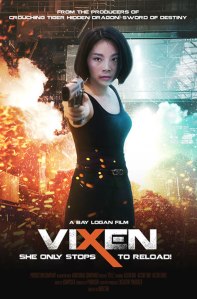 Ever wondered what Die Hard would be like with a cute kick-ass Asian female lead and not Bruce Willis? You probably haven’t but that hasn’t stopped legendary Hong Kong film expert and polymath Bey Logan from concocting a script on that very basis for this Chinese/international co-production. And no, it is not as bad as sounds.

An international conference on the latest cyber security technology is taking place in the Rockham Conference Centre in Binhai City, China. Due to the classified nature of the discussion, the building is put under lockdown by head of security Victor (Bryan Larkin). During the meeting, abrasive US delegate Cassidy (Jared Robinson) upsets the lone female delegate Sunny Liu (Li Ran), forcing her to leave the room in disgust.

While Sunny is composing herself, a group of terrorists storm the conference room and hold the delegates hostage, fronted by an African named Benza (Luc Bendazza) claiming to represent the politically oppressed, taking a stand against western super powers. When they notice they are a delegate short, a man is sent to find Sunny but she isn’t about to taken in so easily.

Vixen is a low budget, cheap and cheerful, generic, derivative even, affair and for those who love to pick holes in everything and gripe about what they did wrong over what they did right, this is one of those films for you. Yet, it is rather earnest, fun slice of nonsense that you can put on, sit back, and enjoy without expecting a profound piece of art.

It is important to establish this right away as its modest production credentials and proficiency shortcomings reveal themselves rather quickly, likely to see the more jaded and snooty viewer reach for the stop button. But there are times when these qualities add something to a film’s charm and Vixen is able to pull this off.

Bey Logan should be familiar to those who bought the now defunct Hong Kong Legend DVDs in the late 90’s, where his essays and commentary tracks were a regular fixture. He’s also written and produced for Jackie Chan, so it is curious that for Vixen, he chose to openly homage Die Hard but at least it is not a beat-for-beat remake with Li merely supplanting Willis which some may dismiss it as.

Opening on a topical note with the conference concerning global cyber security frames the modern idea of the token female of the group being plausibly more than a mere token. However, the dark ages are soon back when Cassidy refuses to even acknowledge Sunny’s presence until putting his foot in his mouth with a near racists rant, allowing her to calmly and verbally kick him in the nuts.

Not content with making a joke about the black Russian delegate, Cassidy’s sexism and white male privilege attitude is laid on pretty thick in bringing the audience onside as the nominal hero of this tale. It didn’t need to be so overt and some of the others could have stood up for Sunny, but at least the big tough Yank was the first to beg for his life when a gun is pointed in his face.

Benza’s motives for interrupting the meeting are obscure at best, and their actions seem to bear no relation to the reason he gave, but this is soon revealed as a cover up for his real objective, one which could have worked better had it been the main driving force behind is campaign. Plus, it makes more sense given Benza’s nationality, less so that his team are comprised of men from across the globe.

Sunny’s transition from lone female presence to deadly butt-kicking machine happens swiftly and seemingly without context. As this isn’t a classic Shaw Brothers film where everyone knows Kung Fu, this feels like one stereotype too many, but Logan smartly hols back on the truth about Sunny’s background, leaving it to Benza to find out for himself who he is dealing with.

Providing some levity aside from Sunny’s “Engrish” wise cracks and the dodgy acting, is Sunny’s recently dumped ex, Ah Ming (Yang Yang) who ends up being her saviour in navigating the building by directing her via mobile phone. They actually have some nice chemistry together, the most effective of the whole film, despite the barest of exposition to explain the reasons for the break up.

This is true of practically everyone, but like I said earlier this isn’t intended as high art. Whatever niggles one might have with Vixen, its saving grace is unquestionably Li Ran, carrying the entire film on her slender shoulders. Photogenic, charismatic, and willing to get stuck in, Li is the whole package as opposed to her male counterparts employed purely for their fighting skills.

Li is definitely a star on the ascendant if she chooses her path wisely and judging by the disappointingly brief fights here, a chance to really go to town would see Li rise swiftly up the female martial arts star ranks. The fights may be short but they are all free from wires and CGI, whilst stunt director Bruce Zhang must be a wrestling fan as at one point, Sunny is powerbombed through a conveniently placed table to break a Triangle choke!

For director Ross W. Clarkson this is also a baptism by fire, and it shows in some of the performances and mild attempts to create real, nervous tension and hard-hitting thrills, but as a renowned cinematographer, the camerawork and overall visual presentation is top notch, giving the film a professional sheen to lift it beyond its modest indie status.

Vixen may not be a pinnacle moment within the martial arts milieu but in spotlighting strong women as the central action flick protagonist, it is step in the right direction. It’s a good introduction to Li Ran as a potential new female fighting star, and for 88 minutes you can consider yourself suitably entertained by this tidy little outing on various VOD platforms internationally now.