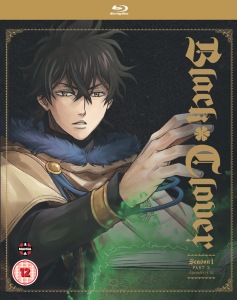 You’ll have to cast your mind all the way back to last August for when the first volume of the latest shonen adventure show Black Clover hit these shores. It’s been a bit of a wait for the second volume, the delay due to the licence changing hands from Sony to Manga.

My review of the volume one goes into detail of the central premise if a refresher is required; if you are more of a tl;dr person then the abridged version is thus: The highest role for mages in the Clover Kingdom is to be Wizard King now that magic is commonplace. Two prospective candidates in training for this position are 15 year-old orphaned brothers, Asta and Yuno, both attending the Magic Knights training academy but in separate squads.

This second volume picks up from where left off, with Asta and his fellow trainee Noelle Silva, the youngest princess of the Silva family, earning a star reward for their squad the Black Bulls from their previous first mission. Their master Yami Sukehiro gives everyone their pay and the day off, during which Asta, Noelle and obligatory adult eye candy Vanessa Enoteca go shopping.

Naturally, they encounter trouble in the form of a thief stealing from an old lady who is caught by Asta, but the old lady was in fact the current Wizard King Julius Novachrono, curious about Asta’s Anti-magic. Meanwhile, Yuno returns home to the orphanage whilst on a mission as security for nobleman Salim de Hapshass, following an attempted attack by bandits., who return later and in a case of mistaken identity, kidnap the orphanage’s Sister Lily.

In my review for part one I noted Black Clover was set to run for 51 episodes – however, I was unaware that pertained only to season one. Clearly, the show has been enough of a success to warrant a second season which is currently airing and has reached episode 84 and looks to take the total to 102 episodes. With the source manga by Yuki Tabata still ongoing, this looks like another shonen show looking to run for a long while yet.

Another observation from season one was how generic the show is, lifting far too many elements from other well known shonen titles to its detriment in establishing an identity for itself. This sadly continues here even though we are now inching towards the twenty-episode mark, with a very strong whiff of Fairy Tail being the most notable influence, whilst Asta as the nominal lead is still very much a shoutier Naruto clone.

Once the two individual missions are completed, the Wizard King decides that the Black Bulls and Golden Dawn, the squad Yuno belongs to, should both investigate the sudden appearance of dungeon on the border with the Diamond Kingdom, enemies of the Clover Kingdom.  At first, neither group is aware the other has been assigned the job, leading to a petty race to reach the treasure room first.

However, they are not alone with Diamond Kingdom wizards soon arriving on the scene to protect their domain, forcing a united front between the two Clover squads in a series of magical battles. Whilst Asta, Noelle and Luck Voltia face off against a smoke mage named Lotus Whomalt, the trio of Yuno, Klaus Lunette and Noelle’s cousin Mimosa do battle with the crystal magician Mars.

Much like his aforementioned predecessor Naruto, Asta places similar high value in team work as he does in fulfilling his own potential, letting Luck test his own skills against Lotus before stepping in and pulling the group together in securing a hard fought defeat. But, as he possesses anti-magic and the rare five-leaf clover, Asta has the advantage in delivering the final blow.

With Mars proving a formidable foe against the Golden Dawn squad, Asta and pals step up to lend a hand but end up putting their own lives in danger in the process as Mars only grows stronger and more dangerous. But who are Mars and Lotus and why is the Diamond Kingdom so hostile towards the Clover Kingdom?

Don’t expect any answers as you won’t get any. The nearest we get to any exposition comes from a flashback to the days of Mars’ youth that offer partial enlightenment but ultimately fails to engender any sympathy or understanding behind his behaviour which ordinarily would have worked, had we been invested in him and the Diamond mages as antagonists in the first place.

This is a result of a major flaw in the scripting, which is attributed to either the source material or the show writer Kazuyuki Fudeyasu, who clearly hasn’t felt the need to be concerned with such vital details. In the nine episodes we’ve already covered three mini arcs and are still none the wiser about so much of the setting, the history, the magic, and the most importantly the majority of the cast.

Granted they all can’t be featured but progress thus far is slow on that front, and having already noted the final episode tally, it is not as if time is a precious commodity at this early stage. Certainly, shonen fantasy shows are about action and bombast but the best ones work because they have substance to prop up the sizzle, and at the moment, the shoots of something substantial are barely peeking up through the soil when they should be starting to bud about now.

It again is unfortunate to report that Black Clover is a show still looking for its direction as well as its own identity, which may come in the next volume or two, but this requires audiences to be patient with it which is a big ask under the circumstances. And with Asta being annoying through shouting his dialogue all the time, any goodwill accrued thus far will be severely tested.

Conclusion – serviceable enough fantasy fodder but still needs focus and start building much needed momentum if it wants to stay for the long haul.