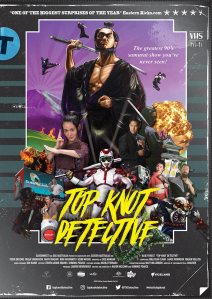 Fame can do terrible things to people’s egos if they let it. Many within the entertainment industry seem ill equipped to handle their success and become monsters as a result. The lucky ones finally mature and earn redemption, others are not so lucky, like Takashi Takamoto, star of the cult Japanese hit TV jidaigeki show Ronin Suiri Tentai  (Deductive Reasoning Ronin).

Most people won’t be aware of Ronin Suiri Tentai, as is the case with many international TV shows, but one country outside Japan where it was popular was Australia, where it was known as Top Knot Detective. Aussie TV host and cult film fan Des Mangan presents this warts and all documentary Takamoto’s rise and fall, his extraordinary legacy and the classic TV show that was responsible for both.

In the 1990’s pop singer and actor Takashi Takamoto was the face of Sutaffu, a multi-national company with a range of goods to its name run by Moritaro Kioke, who wanted to branch off into the world of entertainment with a new TV show. As ambitious as he was multi-talented, Takamoto presented Koike with a script for a jidaigeki show he had written about a ronin during Edo era Japan named Sheimasu Tantai seeking vengeance against his murderous former best friend.

Taking on the role of actor, writer, director, and editor, Takamoto worked himself to the bone yet also partied just as hard, earning a reputation in the media as Japan’s number one bad boy which only boosted his popularity. Behind the scenes, Takamoto was known as a demanding and selfish taskmaster regularly upsetting many of his co-stars, notably Haruto Koike, son of Sutaffu CEO Moritaro, who played his archenemy Kurosaki Itto.

His unreasonable behaviour and scandalous affair with leading lady Mia Matsumoto led to Takamoto’s fall from grace in 1992, until a change in attitude saw him return to TV as Sheimasu two years later, but in conjunction with the replacement show Timestryker. It wasn’t long before Takamoto reverted to is old persona leading to another falling out with Koike Sr. – only this time it ended with the elderly CEO brutally murdered.

As the prime suspect and with incriminating evidence against him, Takamoto was forced to flee Japan, hiding out in China and Korea before eventually ending up in Australia where he was caught in possession of drugs. Fearing the judicial system back home in Japan, Takamoto accepted his punishment and served a prison sentence there.

With contributions from those who knew Takamoto, fans of his work, cult TV historians, along with a wealth of clips from Ronin Suiri Tentai, Timestryker, including candid behind the scenes footage, and rare archive interviews of the man himself, Top Knot Detective is a comprehensive history of the man, the myth, the legend and one of the most inventive, often surreal, but never dull cult TV shows that ever existed.

Except it didn’t exist! Top Knot Detective is in fact a work of pure fiction and this film is actually a mockumentary from Aussie writer-directors Aaron McCann & Dominic Pearce, who have lovingly replicated the esoteric wackiness of 90’s Japanese cult TV with immaculate precision, along with the visual aesthetic of an old well-worn ad much-copied VHS recording.

Such dedication to ensuring the ruse is as believable and convincing as possible deserves our utmost respect – even if the jokes don’t always hit the target or the content of Ronin Suiri Tentai looks too silly for words, it is extremely difficult not to be sucked into the idea we are watching a genuine documentary about a genuine TV show.

Japanese TV (and it’s culture in general) has always stood alone and is admittedly as arcane as it is beguiling which is what McCann and Pearce rely on to hook the viewer into believing this presentation. No story is too incredible that it hasn’t happened in real life – except maybe Takamoto’s escape from Japan which is funny for that very reason) – and with every cast member playing it totally straight at all times, no nuance has been overlooked to make this work, good or bad.

It might be viewed as McCann and Pearce mocking the bizarre excesses of Japanese TV, having a laugh at their expense but given the sheer depth of commitment to aping the style along with the genuine Japanese cast and crew to make it happen (the interviews are in Japanese) it feels too dedicated to be a cruel prank. To b this accurate one has to have a genuine passion and it shows through in every jumpy, over saturated frame.

Granted, the idea of a robo-ninja in feudal Japan is farfetched (and usually reserved for anime) or a rampaging phallus monster but clearly the idea is to capitalise on the reputation for rampant incongruent zaniness that precedes Japanese entertainment. The cheap special effects, in which a body part is replaced with plastic facsimile ready to explode upon impact or the superimposed geysers of blood are another trait not limited to Japanese TV.

Much like the granddaddy of them all This Is Spinal Tap, it is the lengths gone to in ensuring every aspect of the production is as accurate as possible that astounds, right down to the spoof pop music videos, TV interviews, paparazzi photos, posters, product endorsement adverts, and the creases and wrinkles in the video tape playback. Kudos again to the excellent cast for being beyond reproach in the validity and veracity of their performances.

One personal complaint is HOH subtitles haven’t been provided for the English narration and interviews, the dialogue often clashing with overlapping background music or sound effects, meaning sadly TWF are added to the list of UK distributors neglecting their hearing-impaired audience.

Fortunately, the majority of the dialogue is subtitled Japanese so it is easy to follow and enjoy. Perhaps the biggest disappointment is that Top Knot Detective doesn’t really exist as it seems like a real hoot but this terrific spoof is a great consolation.