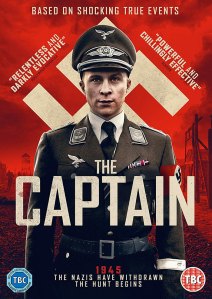 World War II is full of incredible stories and has proven to be a vast source of inspiration, both in fact and fiction, yet despite the war being over for almost 75 years, there are still tales being inspired by or dramatised from this period by filmmakers. The Captain is a great example of this.

April 1945 and the war is all but over for the Nazis. With so few enemies left to conquer of fear them, they instead have turned on their own, punishing deserters who fled the army. One such lad is Willie Herold (Max Hubacher), a 19 year-old private being shot at by his commander. During his escape, Herold finds an abandoned car with the uniform of a highly decorated Luftwaffe captain inside, which he swaps for his wet and torn clothes.

Herold is then mistaken for a captain by aging rifleman Freytag (Milan Peschel) who had been separated from his squad. Herold decides not to correct Freytag’s error and enlists him as his driver. Working under the premise of a top-secret mission from Hitler himself, Herold soon arrives at a camp of deserting soldiers whom he agrees to help deal with,  but with the power gone to his head, Herold’s brutal punishment raises concern.

The most shocking aspect of The Captain for many will be that this story is entirely true – Willie Herold did exist and did assume the identity of a high-ranking official, orchestrating the execution of many people. That he was only 19 years-old at the time is terrifying as much as it is astonishing, when somebody that young who was actively fleeing from the horrors of war should somehow evolve into such a murderous creature.

Director Robert Schwentke is better known for his Hollywood output, from romantic fare like The Time Traveller’s Wife to action flicks like RED. There is no such indication of any Tinsel Town influence in this return to his Teutonic roots which is very much in its favour, Schwentke illustrating the old adage about taking the man out of the country.

Shot in black and white (the DVD version has both a colour and black and white version, the latter is by far the most effective in creating a tangibly stark atmosphere), the film is ultimately about survival and fear. With the uniform being a near perfect fit aside from the long trousers, the transformation is almost instantaneous as Willie adopts the role of captain like a child playing dress-up.

Having fooled Freytag so easily, Willie is confident this ruse will help him escape. At first, he offers to seek compensation for the army inconveniencing the locals, but this altruism is short lived once he recognises the doors the uniform opens for him. Enlisting the brutish Kipinski (Frederick Lau) as his hired muscle, the charade continues; holding his nerve, Willie is able to fend off other ranked soldiers, even gaining their assistance.

We do find ourselves asking how a 19 year-old whose fresh face looks like it has never seen a razor is able to convince so many people, including tenured officers twice his age, he is old enough and worthy of a such a lofty rank. It may be the conceit of the entire story but being based on fact, we can only surmise the real Willie Herold either looked older or was a bloody good actor.

Remarkably for a private, Willie possesses knowledge of procedure and jingo worthy of his faux military position, combined with sheer bold-faced temerity and a precocious mind when it comes to manipulation that sees him in good stead at every turn. At the POW camp, he easily wins over officer Schütte (Bernd Hölscher) without any evidence Hitler genuinely sanctioned this secret mission, whilst Schütte’s superior, Hansen (Waldemar Kobus) is less convinced.

Yet, luck is very much on Willie’s side and after a few phone calls and the inherent fear of questioning the Führer’s word, he is allowed to continue with Task Force Herold, and is requested to deal with the deserters. Maybe it was a case of going too far with the façade, or maybe the power had gone to his head, but Willie at this stage is a ruthless and sadistic individual overseeing multiple executions on a daily basis with little time for clemency or sentiment.

There is a loose comparison to be made between this film and Catch Me If You Can, another true story about teen conman Frank Abagnale who assumed numerous identities and lived the high life off this deception. The difference is nobody died because of Abagnale’s actions – Willie Herold was directly responsible for the senseless slaughter of hundreds of people.

Spielberg’s film was intended to entertain and maybe have audiences begrudgingly give Abaganle some kudos for his moxie; Schwentke is not looking for the same reaction in sharing with us a tale so unbelievable it shouldn’t be true. Herold’s tale is a great story if it were fiction, and I suppose in a distant way there is cause to admire his nerve in playing his own army at its own game but his descent into wanton evil negates this.

Max Hubacher gives, if you pardon the pun, a commanding performance as Willie, able to sneak in subtle suffusions of doubt and fear in his otherwise adopted stoic persona whenever the he is close to being exposed. His chilling essay of such a depraved mind is nicely countered by that of Milan Peschel as Freytag, a sort of Joe Pesci take on Baldrick, someone caught in the same  nightmare as Willie but with his humanity still intact.

Willie Herold was eventually caught and executed for his war crimes in 1946 aged just 21, leaving behind an extraordinary legacy that Schwentke has captured in this dark, distressing, appalling, yet engrossing film that reminds us war makes monsters of us all. The slightly saggy middle section aside, this is an immensely powerful piece of cinema to behold.