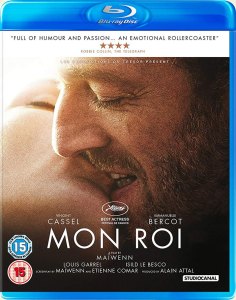 Bruises heal but mental abuse stays forever, yet some schools of thought propagate a possible correlation between the two, and that rehabbing the physical could help fix the psychological. This might just be modern cod philosophy or an unexplored phenomenon but they do say “healthy body, healthy mind”.

Marie-Antoinette “Tony” Jézéquel (Emmanuelle Bercot) severely injures her right knee in a skiing accident, heading to a seaside clinic to rehab it. The resident psychologist tries to get Tony to open up about why she had the accident, planting seeds of a deep-rooted psychosomatic motive rather than an unplanned mishap.

Through flashbacks, the story of Tony’s tumultuous marriage to Georgio Milevski (Vincent Cassel) is revealed. Having briefly met once before, they met again in a nightclub when Tony was out with her brother Solal (Louis Garrel) and his girlfriend Babeth (Isild Le Besco). Despite being polar opposites – Tony the sensible, organised lawyer and Georgio the capricious extrovert – an immediate attraction leads to romance and later marriage which doesn’t last.

Actress-turned-director Maïwenn (nee Le Besco, sister of Isild) earned an eight-minute standing ovation for My King at Cannes in 2015 but was it out of appreciation of the film or her bravery in publicly sharing a painful chapter of her personal life? The saga of Tony and Georgio is loosely based on Maïwenn marriage to real estate developer Jean-Yves Le Fur, of whom we can only hope that Georgio is a fictional exaggeration and not a direct portrayal.

Even with this knowledge it is a little difficult to divine exactly what Maïwenn’s intent is with this film or what she is trying to say – is it that men are all pigs and women are dumb to keep falling for their tricks? Is she sticking the knife in to a brutish ex? Or is the earlier discussed theory about physical and psychological rehab something she is trying to inculcate?

If it is the first suggestion then Maïwenn’s achieves this inside the first 40 minutes with the remaining 80 minutes becoming almost redundant, whilst the second would leave  her open to a lawsuit, unless it was all true. To support the third option, the film flits between the two timelines by way of juxtaposing the contrasts of Tony’s life – i.e. the more she suffers in the past is countered by her improving spirit in the present.

Like most relationships, everything is going swimmingly at first with notorious womaniser Georgio finally ready to settle down with Tony despite being atypical of his usual taste in women, which she makes a pint of discussing with him. That one former lover is a cover model Agnes (Chrystèle Saint Louis Augustin) who can’t seem to let Georgio go makes Tony feel uncomfortable but Georgio insists she has nothing to worry about.

One day Georgio has an epiphany, deciding he wants children with Tony so they marry and successfully set about having a baby. This is where the wheels start to come off the merry go round. Agnes tries to commit suicide and names Georgio as her next-of-kin, yet despite the impending arrival of his child drops everything for Agnes leaving Tony to stress out alone.

A son is born, who Georgio names Simbad (after an argument), but he still devotes his time to Agnes, with the final nail in the coffin being Georgio buying a second apartment to live alone so he doesn’t disturb Tony but has a crib ready for Simbad. Yet they remain a married couple even though Georgio is sleeping with other women, partying like mad and racking up debts.

Tony tries to fix their problems but it is in vain, so having realised enough is enough she says they should divorce. Georgio refuses as, in his mind, all their problems are Tony’s fault, making demands for Simbad’s future no court would ever realistically countenance and other similar threats.

Yes, we’re talking Grade A arsehole here which the audience could see coming a mile off and we suspect Tony probably did too but was so in love she had hoped his assurance that her “normality” was the leveller Georgio needed in his life. Brother Solal is the appointed “I always knew he was a wrong for you” trope in the tale, himself being a bit of stuck up prig but at least he respected Babeth, but at least Tony is not a weak, apologetic victim but a livewire whose electricity flow was temporarily impeded.

We can only surmise how much of the story is embellishment and how much is fact, only Maïwenn, Le Fur and those involved know for sure, which makes it hard to swallow in terms of how Maïwenn let it go that far is these things are true and if Le Fur really was that much of a solipsistic douche. Agnes is based on Le Fur’s ex-fiancée Karen Mulder, a 90’s supermodel who did attempt suicide, which is either bad taste on Maïwenn’s part for bringing it up here or pure spite.

As opined earlier, the messages of the film are a little muddled, so we don’t know if we should take it as catharsis for Maïwenn or a cautionary tale for new lovers, but what isn’t in dispute is the quality of the performances. Vincent Cassel effortlessly delivers a career best turn as the gregariously louche lothario Georgio but it’s Emmanuelle Bercot’s raw, honest and bruising essaying of Tony that is the most outstanding facet of this film.

Maïwenn proves herself a competent director and a sharp writer with My King, able to coax impressively natural and credible performances from her A-list cast. However, she needs to curb her ambitions in favour of audience patience. At 123-minutes long, fatigue start to set in around the hour mark, which would not have happened had this been a concise 90 minutes or so. In its current form, we seem to suffer for as long as Tony did, otherwise this is deeply affecting filmmaking.