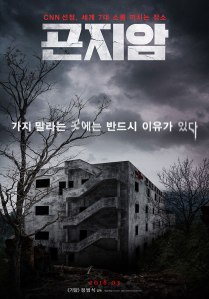 It’s hard to believe it has been twenty years since the found footage subgenre in horror took off with The Blair Witch Project, yielding many successful and unsuccessful imitators in its wake, including the Spanish REC series being one of the former. Asian cinema has been surprisingly slow in exploring this phenomenon so here is Korea to rectify this.

The people behind popular YouTube channel Horror Times have picked up the footage of two teens inside the abandoned Gonjiam Psychiatric Hospital, the director of which allegedly having slaughtered all the patients then disappeared. In the clip, the boys are about to break into room 402 when they are distracted by a noise, and the footage ends there.

Horror Times owner Ha-Joon (Wi Ha-joon) rounds up a group consisting of Ah-Yeon (Oh Ah-yeon), Charlotte (Moon Ye-won), Ji-Hyun (Park Ji-hyun), Sung-Hoon (Park Sung-hoon), Seung-Wook (Lee Seung-wook) and Je-Yoon (Yoo Je-yoon) to investigate the hospital. Staying at base-camp, Ha-Joon is in contact with the entire group and patched into their cameras for the live broadcast on YouTube, hoping to attract one million viewers.

Blair Witch may be the original but is it the best? That is subjective but one thing it had going for it is it was made during an era where technology was at a simpler level. The verisimilitude achieved is much more convincing as a result but the advantage modern filmmakers have is the greater tools at their disposal to create scarier effects.

In many ways, I’ve summed up Gonjiam: Haunted Asylum but at the same time, I don’t want to sell it short, as it is an effectively creepy and occasionally heart-stopping slice of hokum. It seems that Jung Bum-shik was very aware that he was making a Blair Witch for the YouTube generation, making the whole social media/modern technology aspect an intrinsic part of the story.

Jung sticks to the basic principle of the found footage template right down the first meeting of the group being documented for the site as shot on camcorder, whilst the original footage of the two boys at the start of the film was shot on a mobile phone. This means any material is easily accessible but the mystery of what happened to the boys remains.

Unusually, Gonjiam Psychiatric Hospital actually exists and is regarded as one of Korea’s most haunted locations but the history Jung presents here is entirely fictional. For the purpose of this story, the hospital was built by the Japanese during the occupation on a mass grave of resistance fighters and later a top psychiatric facility. The notorious Room 402 is apparently the intensive care unit but the door has seldom been opened, hence the curiosity of what lies beyond.

Streaming the event live on YouTube allows for the concept to be subverted since the idea what is being shown is faked is always at the back of the audience’s mind, and without spoiling things too much, Ha-Joon does indeed have Sung-Hoon and Seung-Wook fix a few things to keep the tension up and give the audience something to satiate their curiosity.

This isn’t revealed until 45 minutes into the film thus makes the outcome somewhat predictable – but it is how they get there and how good a job they make of it that is the conceit, and Jung again knows he must keep his cards very close to his chest in keeping the audience from being removed from the moment and ensure they suspend their disbelief until the end, holding all doubts at bay.

Another advantage of the live streaming process is having the cast all readily available for the audience to see at all times via chest mounted GoPro cams – meaning copious shots up the cast’s noses – with Ha-Joon controlling the order at the camp. Unfortunately, not everyone is easily recognisable this way, even when the screen shows multiple feeds at the same time, but being in close proximity of their terrified faces does help increase the sense of horror for the viewer.

Jung cheekily riffs on Blair Witch having the camp set up in a forest outside the hospital with a cute gag involving a makeshift marker to help their direction. Thereafter, we find ourselves in Asian horror territory, such as a small ceremony they hold to appease the spirits which would not be a concern here in the west. This also manifests itself in some of the apparitions that spook the group, with the odd nod to REC too.

The success of a horror film is the performances as much as the scares, and both are very effective, the latter not always original but when they are you’ll feel as silly as the cast for being spooked until they really start to hit hard! The jittery camera movements are critical in relaying the chaos and terror the cast are experiencing, along with the interruptions in the feed for added nervous ambiance.

For this genre to have real credibility the cast needs to be unknown but only two are, with Moon Ye-won as Charlotte being the stand out. The poor lass suffers the most, her essaying of this horrific journey from playful wannabe to traumatised victim heightened by being shot mostly in close-up via body cam. Everyone else acquits themselves with similar aplomb in achieving requisite palpable authenticity.

On the technical front, Jung makes this hard on himself by having so many cameras to jump between, which the live stream premise is a great cover for, except the downside is at times it is a little too smoothly edited when cutting back to Ha-Joon at the camp. For the most part though, the claustrophobia of the dark hospital interior is exacerbated by the unsteady motions of the single view camera.

It’s a stretch to call Gonjiam: Haunted Asylum a game changer but as a modern take on a diluted genre, it provides sufficient chills and unease to make you wary of the dark for a while.