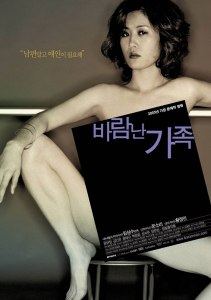 “If only they kept in their pants” would appear to be the initial message of this saucy Korean film, but that is not necessarily the problem – rather, it is communicating with each other and seeking a more proper solution to that problem which ultimately leads to the downfall of a dysfunctional family who don’t know what makes them happy.

Lawyer Ju Yeong-jak (Hwang Jung-min) seemingly has it all – a very successful career, a loving wife Eun Ho-jeong (Moon So-ri) and a cute adopted son Soo-In (Kim Young-chan) – except he no longer gets satisfaction from his wife in the bedroom, and coincidentally, neither does Ho-jeong from him. Yeong-jak has already found a way to get his jollies though, with artist Kim-yeon (Baek Jeong-Rim).

Having given up a dancing career to be a good wife and mother, Ho-jeung remains bored and unfulfilled, until she spots teenage neighbour Shin Ji-woon (Bong Tae-Gyu) spying on her and decides to have some fun of her own. Meanwhile, Yeong-jak’s mother Hong Byung-han (Youn Yuh-jung) has been having an affair in the wake of her husband’s Joo Chang-geun (Kim In-mun) terminal illness depriving her of coital action.

But this jet black comedy drama about a family of shaggers takes a very dark turn when Yeong-jak knocks a drunken postman (Sung Ji-Ru) off his scooter and injuring him, whilst out driving with Kim-yeon. The postman has no insurance but needs the work so Yeong-jak uses his legal expertise to worm out of any culpability incurring terrible, lie changing repercussions.

Looking for a moral compass among the cast of this sordid tale is a futile exercise, with the exception of young Soo-in, ironically the one who suffers the most. But beyond the infidelity and rampant promiscuity A Good Lawyer’s Wife is a dark satire on bourgeois life in Korea and the role women are expected to play in it. A typical sounding Korean drama but in the hands of Im Sang-soo, it’s something far more subversive.

The original Korean title translates to A Strange Family, offering a wider scope of focus than just Ho-jeong as the alternative English title suggests. In fact, she is not even the first person we meet in this film, that honour belonging to Yeong-juk in a gallows humour opening, in which he visits the site of recently exhumed bodies and ends up in the pit.

Accompanied by a jaunty piece of kiddie’s music Im teases a largely comic tale, and humour is rife throughout, but the emphasis subtly shifts from playful to deviant in due course. The unlikely frisson between Ji-woon and Ho-jeong – the scrawny teen and the well-to-do trophy wife and mother – is plainly ridiculous, ostensibly writing its own gags.

Perhaps the most scandalous scenario is Byung-han’s, the 60-something grandmother having to seek her pleasure with a former flame as hubby Chang-geun hasn’t touched her in 15 years, and is currently dying from alcoholism. The discussion here is a woman still being sexually active in her old age when the patriarchal society of Korea insists only men still get to sow their oats past 30.

It’s not even that Byung-hun doesn’t love her husband but she has already planned to marry her lover once Chang-guen passes on, a move that gets Ho-jeong’s support but unsurprisingly, not Yeong-juk’s. It seems callous that Byung-han prioritises sex in her life but is this because she was forced to assume the role of the dutiful wife and mother and not follow her urges and fulfil them without having a family to let down?

We will never know as Byung-han disappears during the second act which turns its attention to the growing flirtations between Ho-jeung and her teenage admirer Ji-woon. Like most teens, he thinks he is going to be a stud in the sack, so Ho-jeon lets him try his best without doing anything, getting more enjoyment from his inept bravado than she should.

One curious exploration involves Soo-in who seems barely out of nappies yet has already been told he is adopted. No explanation as to why this is but he has a ton of probing questions, like does his grandparents know, and was he a better child before he knew he was adopted. Soo-in doesn’t appear to feel any less loved but he clearly knows what adoption is and something makes him wonder if he should feel different.

Being the daring and versatile actress she is Moon So-ri adds another complex role to her CV in Ho-jeong. As ever, Moon’s uncanny ability to bring a nuanced naturalism to any portrayal makes her an engaging watch and Ho-jeong and enigmatic presence, bolstered by future box office mega star Hwang Jung-min s the vain Yeong-juk, baring all as much as Moon does, emotionally and literally.

A Good Lawyer’s Wife will entice viewers because of the explicit (for Korean cinema) sex but the story that facilitates is a grotesque indictment of a screwed up society. Im provokes the audience through its base instincts to prove his point, which might be his undoing for those unable to look beneath its generous helping of prurience.